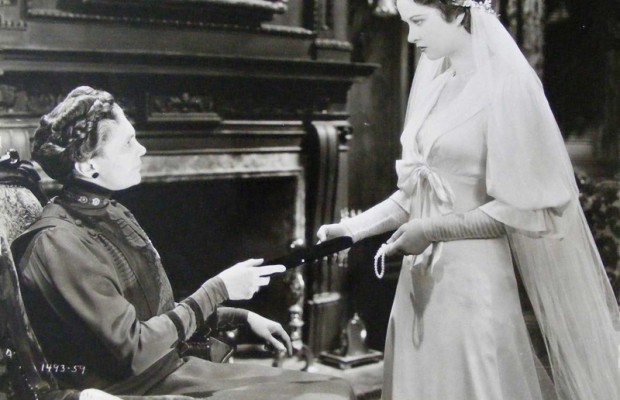 “Old-Fashioned” is an expression which sums up the whole of Double Door.  However, the total integration of the recognizable conventions of the dark old house genre makes this film an extremely satisfying experience.  (It was one of the major hits of a Toronto Film Society seminar at the Briars in the early 80’s).

The plot, briefly, involves the hatred and jealousy of a spinster towards the new bride whom her half-brother has brought home to their creepy Victorian mansion on Fifth Avenue.  Evil lurks in every square inch of this gloomy house, and especially in a secret room behind a certain double door!  Behind closed shutters, characters in Edwardian garb move noiselessly through eerie corridors lit only by candle-light.  Can chilling hysteria be far away?

The fact that this all works so well – to drive the audience to a matching level of hysteria – must be attributed to the director and his cast.  While the script tends at times to reveal its stage origins by catering to scenes of lengthy conversation, director Charles Vidor puts the emphasis wherever possible on the atmosphere of his setting and the unspoken desperation of his characters.  The subtlety with which Vidor conveys Victoria Van Brett’s incestuous desire for her half-brother should come as no surprise to admirers of the equally subtle presentation of the theme of homosexuality in the director’s famous Gilda (1946).

Both Mary Morris and Anne Revere as the spinster sisters created their roles on Broadway.  Both were making their film debut here.  Morris returned to Broadway permanently after Double Door, but Revere was to leave a lasting mark on film history with a series of memorable performances in character roles in the 1940s and early 1950s (Song of Bernadette, National Velvet, Body and Soul, Gentlemen’s Agreement, A Place in the Sun, etc.) until she was blacklisted during the McCarthy era hearings.  Eventually Revere fans were heartened when, in 1960, she was honoured with a Tony for her performance on Broadway in Toys in the Attic.

In 1934, Kent Taylor and Evelyn Venable seemed on their way to becoming popular constant co-stars, as they appeared together in Death Takes a Holiday and David Harum as well as Double Door.  But Taylor instead soon became the second lead in other actors’ films or the lead in B films on his own.  Venable left acting in the early 1940s to raise a family.  When they were grown, she enrolled in classics at UCLA.  There she became such a successful scholar that she embarked on a second career as an instructor in Latin and Greek at the same university.