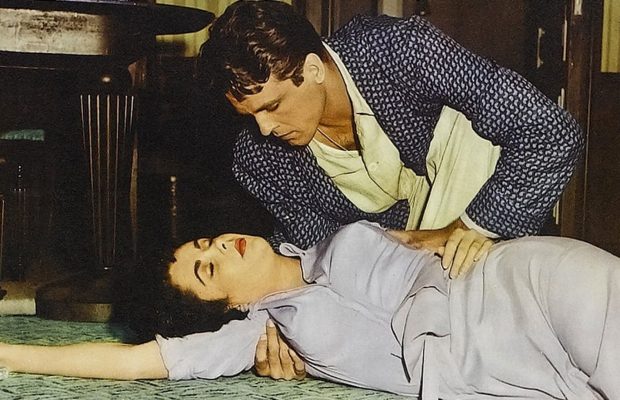 Toronto Film Society presented Rhapsody (1954) on Monday, July 19, 1982 in a double bill with The Heiress as part of the Season 35 Summer Series, Programme 3.

“‘”I must possess the man I love, heart, body and soul”; Elizabeth Taylor as a woman obsessed with insatiable desire!’  That’s what MGM’s ad copy screamed during its tub-thumping for Rhapsody, and Miss Taylor, in what I consider the best performance of her now-thirty-year film career, lived up to every word of it in this florid romance of a girl who had too much money and beauty for her own good, and two musicians who react according to their individual natures to her emotional demands.

“I have never had too high an opinion of Miss Taylor’s basic talents, her two Oscars notwithstanding.  Cinematically she is ideal, in a visual and personality sense, but her exceptional beauty and potent sexual chemistry have too long disguised the fact that her spirit is more that of a kitten than a tigress, her basic emotions immature despite all she has gone through in real life, and her outlook on life shallow and girlish rather than deep and womanly.  She meows when she should roar, and she is petulant when she should be angry, she is sentimental when she should be tragically emotional, and she is rasping when she should be authentically tough-grained.  …But in Rhapsody, filmed when she was twenty-one, Miss Taylor was a true actress as she has often been a genuine star–and why?  Because the part had met the woman, or girl, rather.  Miss Taylor’s shallow emotional makeup and limited intellectual capacity identified, and meshed, perfectly with Louise Durant, a not very bright but ravishingly sexy heiress peregrinating around Europe mooning over a handsome violinist who, being more mature, bright, and more gifted and dedicated, eventually gave short shrift to her whining possessiveness and constant demands for attention.

“…That, then, is the story of Rhapsody, and it makes surprisingly effective romantic cinema.  First off, it points a good moral:  to wit, people should accept their responsibilities to others as well as to themselves, and true happiness comes from accentuating giving, not taking.  Then it is lushly mounted, with handsome settings, top production values, literate writing, Miss Taylor in her best performance, Vittorio Gassman has most charming self, and sensitive, luminous John Ericson in his finest work.  Ericson is another actor whose unusual talent and mystique have been grossly neglected by Hollywood, as were John Kerr’s and others.  Here he gets across an interesting synthesis of manly amiability and fierce tenderness, making his characterization of an essentially dependent and affectionate person who rises to the demands of his artistry when called upon, a rather affecting and memorable incarnation.

“Then there is Johnny Green’s excellent musical direction, the fine renditions by Michael Rabin’s violin of Tchaikovsky’s violin concerto and other works; the expert playing of Claudio Arrau, who keeps that Rachmaninoff piece singing, and Peter Ballbusch’s montage work, which whips around Europe in fine, elegant, fast-paced style.

“Rhapsody is a romance that makes one think; it has a moral; it is beautifully mounted, Miss Taylor, besides looking ravishing, gives a performance in a role she understands; it has a fine and unusual ending that leaves one glowing–and when revived on TV it proves that twenty years have not diminished its impact and its radiant verve and affirmation.”