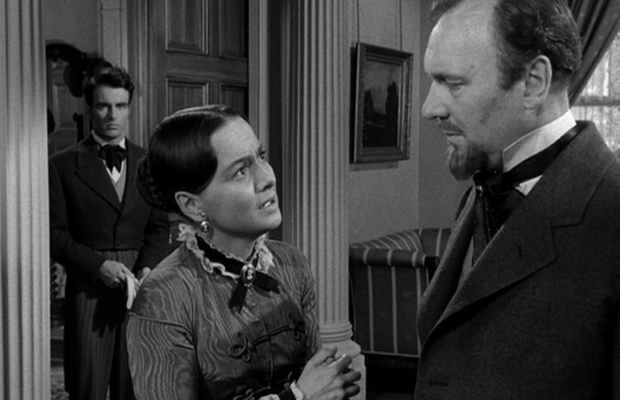 Toronto Film Society presented The Heiress (1949) on Monday, July 19, 1982 in a double bill with Rhapsody as part of the Season 35 Summer Series, Programme 3.

“…Like all true cinematic art, The Heiress reflects the original artist, in this case the consummate psychologist Henry James.  It is a handsomely romantic film–romantic in its settings, its costumes, its music, its overall flavor and atmosphere.  It is a delightful blend of the intelligent, the escapist and the realistic, the tender and the dry–elements that can be made to coalesce only if blended by masters.  Mastery is apparent in every aspect of this production.

“The story has a universal appeal.  It tells of Catherine Sloper (de Havilland), a shy, plain girl of the greatest good will who wants only to please the father she loves, yet seems to elicit only his testy disapproval in matters great and small.  She is an heiress–she has $10,000 a year from her late mother and will receive another $20,000 on her father’s death ($30,000 a year was considered immensely rich in 1850) and by all the rules should have been courted by a parade of young aristocrats reaching around the block.  However, her gawky stance, her plain demeanor, her lack of charm, put them off.

“But along comes Morris Townsend (Mr. Clift), a determined, aggressive young man with more than his share of charm and persuasiveness, who dissipated a small inheritance on a European tour, and is now looking to shore up his fortunes.  He pursue Catherine, overwhelms her, deceives the naive young woman into believing he loves her for herself alone, and soon they are engaged.

“Her father sees through all this, and curtly rebuffs the young adventurer, but Catherine overrules him for once in her life, and plans an elopement despite a trip to Europe with her father that does not deflect her purpose, as her father had hoped.  …

“Miss de Havilland is wise and reticent when the occasion calls for it; breathlessly, shatteringly in love while taken in by her delusion; bitter and indeed diabolical when she turns on the father who had for so long held her in contempt; and slyly cat-and-mouse-ish with the returned suitor whose lying duplicities she penetrates only to well.  For after seven years her character has taken on dignity, a knowledge of the ways of the world and of men’s hearts and minds, and her alert expression and wary glances get this transformation across clearly.

“Mr. Clift tightropes gracefully with a character that is devious and given to mendacity, yet almost boyish in its greed and consciousness of the power of its own charm.  Money and a life of ease, luxury and irresponsibility are his only life-aims, yet there is almost an innocence in his single-minded pursuit of these regardless of whom he hurts–an innocence whose destructive darker side the old maid of Washington Square no longer feels is worth countenancing and indulging.

“Every scene is precise in its detail, carefully wrought, literately written, painstakingly directed.  And what scenes!  De Havilland’s wonderous awakening to love as the unctuous Clift whispers sweet nothings and pays a seductive love tune on the piano; her deep, dark agonies as she waits hour after hour in the drawing-room for her inconstant swain to appear fort heir elopement; her arresting reversal of character and personality as she wages war with her father for the first time (‘At last you have found a tongue, Catherine, if only to say such terrible things to me,’ Richardson gasps.)

“The ambivalence in her mood and expression as she listens to Clift’s lying reassurances and unctuous insincerities the second time around, after which she tells her aunt, ‘He came twice–I shall see to it he never comes a third time.’  For pride in her, after all her disillusionment and humiliation, is stronger than passion, and when her shocked aunt tells her, ‘Oh how cruel you are, Catherine,’ she replies crispy, ‘Yes, I can be very cruel, for I have been taught by masters.’

“Richardson is a joy to behold–starchly, crisply cynical, supercilious toward the daughter he tolerates but despises, brutal with the young man who comes seeking, honestly amazed when he finds his daughter has a strength of spirit to match his own.  Under Wyler’s guidance, Richardson chisels out a fine cameo of delicately observed moods and nuances, gestures and expressions, all the way from jingling his keys to laying down his gloves.  His speech inflections play like the finest music; his mannerisms are precisely attuned to the emotional currents of the moment.  A lifted eyebrow, an impatient gesture, the way he closes a door–all illuminate the character of Dr. Sloper.

The Heiress is romance at its disciplined finest–romance essentially desentimentalized, realistic, aware–yet without its special brand of mourning tenderness and heartbreak.  It is a masterpiece by any yardstick, and one of Wyler’s enduring memorials.”