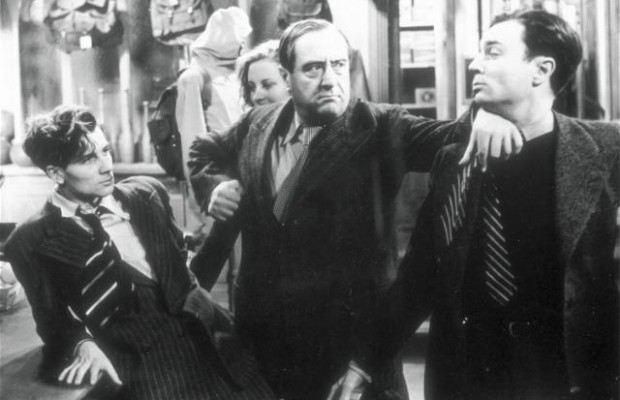 Although Raimu dominates this picture masterfully, it is Michele Morgan who will win a host of new American fans.  Her prime asset is a youthful beauty with telling personality and a simple unaffected acting charm.

‘Heart of Paris’ is not a lurid melodrama as title might suggest.  It’s courtroom drama in an interesting French manner, with simple human values.  An elderly juror, idealist and a dreamer (Raimu) takes pity on a victim of fate, in the person of Miss Morgan, and brings the friendless beauty, who has just been acquitted of murdering her lover, into his home.  Scripters have made this incongruous situation acceptably plausible, although her presence in the midst of a contented bourgeois family threatens to disrupt their lives with almost tragic consequences.  His fatherly interest in the girl is misinterpreted by the son.  Sensing the trouble she is causing, Natalie intends to vanish, but when the son rifles his father’s cash box for her near-tragedy results.  Raimu catches him and fells the girl as the betrayer of his trust.

Principal tenets of this story appear simple and undramatic, but it is the treatment of human values and affairs of the heart, so typically French, which redeem the picture.

Raimu’s performance is a fine example of repression.  Several other bits stand out, such as Jacques Gretillat’s grandiloquent handling of prosecutor’s role; Nicolas Rimsky’s bit as a taxi driver; Jeanne Provost as the wife and Gilbert Gil as the son.

Film is expertly edited and cut without any waste footage.  Translation and titling is likewise accomplished and makes the story understandable.  Should do well in the foreign-language and art houses.  Film was previously titled ‘Camille le Vallant’ (The Valliant’), but 20th-Fox’s objection to the use of its prior ‘Valiant’ title caused the switch in tag.

HEART OF PARIS, adapted by H.G. Lustig from a story by Marcel Achard, directed by Marc Allegret, an Andre Daven production.

A comically stimulating performance of a Parisian bourgeois by the eloquently featured gentleman who calls himself “Raimu,” together with lines and situations of a charming drollery, distinguish the French film “Heart of Paris (nee “Gribouille”) now showing at Cinema 49.  Without exaggerating the merit of so slight a comedy of domestic humors, it is only fair to say that it moves with an agreeable plausibility of incident and characterization to a climax which—as so often happens in family affairs-proves to be a stirring anticlimax.

The story is that this good-hearted keeper of a bicycle shop, chosen for jury duty, not only gains acquittal for the Russian heroine of a murder trial but is so touched by her tragedy that he gives her a job in his shop under the suspicious eyes of his family.  The complications which ensue from her presence, especially as regards the heir of the family, who duly falls in love with her mysterious Slavic beauty, are the kind that sound pretty dull in a synopsis.  The camera, noting carefully the reactions of M. Raimu, has made them amusing and even a little bit dramatic.