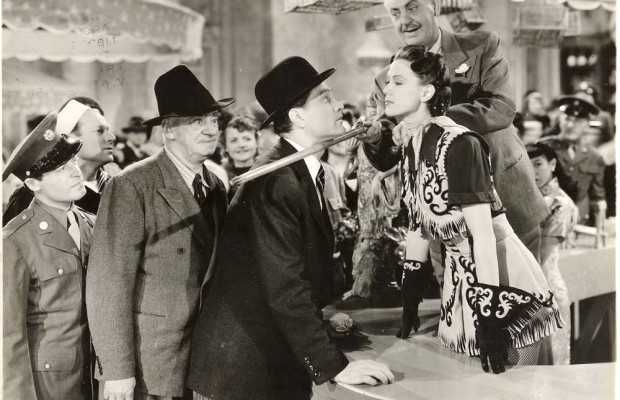 Toronto Film Society presented I Dood It on Sunday, August 4, 2013 as part of Season 66 Raiding the Vaults at the George Eastman House Weekend.

‘I Dood It’ is, by Metro’s usual standards, not one of its best musicals, but that’s due mostly to the screenplay.  While the plot of a musical can generally be accepted only as a cue for the song-and-dance, the failing is particularly apparent in ‘Dood It.’  The yarn is too unbelievable, though the absurdities fashioned for Skelton have their compensations in the actual performance.

‘Dood It’ is enhanced by its specialties, notably by the Dorsey personnel, the dancing of Miss Powell, the pianistic swingology of Miss Scott and the sultry warbling of Miss Horne, the latter two in an all-Negro production number.  This sequence, incidentally, emphasizes the film’s lack of continuity by the obviously contrived manner in which it is introduced.

Story is a retake of an old situation, dealing with the love of a valet aide for a dancing star.  That would be Skelton and Miss Powell.  Skelton courts Miss Powell from a distance, a fashion plate through borrowal of his customers’ clothes.  Then follows a series of situations that find him mixed up in a ‘spite’ marriage with Miss Powell, followed by his discovery and rout of a spy plot.  It’s all very hectic and uncertain, but pretends to be nothing more than a vehicle for the comic’s fol-de-rol.

Skelton remains a topnotch comedian with his standard dumb-cluck type of business, though the material is somewhat spotty, while Miss Powell is seen at her best advantage during the production numbers, in which she hoofs with her usual sock results.

Dorsey’s outfit, a boxoffice factor in itself, is in and out ******rnment to the presentation routines, and always acquits itself niftily, ably backed by its two singers, Bob Eberly and Helen O’Connell.  There’s plenty production backgrounding for the Misses Scott and Horne in a number with lots of s.a. as evidenced by the two colored principals, Richard Ainley.  Patricia Dane, Sam Levene and Thurston Hall have lesser parts and they handle them capably.

There are a flock of tunes from some of the top songsmiths in the biz, some of them now standard, and all, help towards the film’s plus marks.  Vincente Minnelli has directed for speed, but there are enough draggy spots to warrant at least a 10-minute cut.  The dances are colorful and the over-all production investiture bespeaks hefty expenditure.

A lot of responsibility has been piled upon Red Skelton’s head by Metro in its picture called “I Dood It,” which came into the Paramount yesterday—and that is to carry the whole picture, with a moderate assist from Eleanor Powell.  The task is inhumanly onerous, considering the tonnage of the load, and the title of the film (in Red’s vernacular) slightly exaggerates the case.  But what with a vigorous performance on the part of the wavy-haired clown and such reckless disregard of his person that he frequently knocks himself out.  Mr. Skelton does manage to lug the picture pretty much in one piece from here to there.

If the foregoing gives the impression that this film is no wisp of gossamer, our opinion has been verily transmitted.  For “I Dood It” is ballasted with stone.  Its story about a dumb pants-presser who is moony over a glamorous acting star to whom he suddenly finds himself united begins to sag about half-way along.  Up to that point, excitement has been limited to a few flashes of Miss Powell’s talented limbs and a modest exercise by Mr. Skelton of his comedy antics, under wraps.  When the droop becomes too apparent, the producers desperately try to shore it up with a quick underpinning of boogie-woogie, contributed by Lena Horne, Hazel Scott and a Negro chorus.  But that proves a dubious recourse; whereupon Mr. Skelton cuts loose and really puts himself behind the picture.  His herculean hoisting heaves it clear.

For the boy is a very funny fellow—you’ve got to hand him that—and when the moment requires inspiration, he would break his leg for a laugh.  The best sequence in the picture is one in which Red dons a beard to play a Yankee scoundrel in a Civil War drama opposite his wife.  And his obstinate struggle with those whiskers is enough to roll you into the proverbial aisle.  Also he pulls some screaming business trying to haul a drugged Miss Powell to her repose.  He is a clumsy pants-presser in this picture, but a pantomimic par excellence.

Miss Powell’s contribution is rationed right down to the bone—or rather two bones, with enough meat on them to make them exciting when they tap-dance.  And that they (and she) do quite nicely in one hula number particularly.  Otherwise Miss Powell makes a willing but not very inspiring foil for Red.  Miss Horne’s and Miss Scott’s rendition of a highfalutin version of “Jericho” is too consciously staged to be enchanting, and Jimmy Dorsey’s band plays “Star Eyes” just adequately.

All of which adds up to “I Dood It,” a on-man comedy in which Mr. Skelton is the doer.  For grammar like that, maybe he’s got what he deserves.