Toronto Film Society presented The Band Wagon (1953) on Monday, August 22, 1977 in a double bill with The King Steps Out as part of the Season 30 Summer Series, Programme 7. 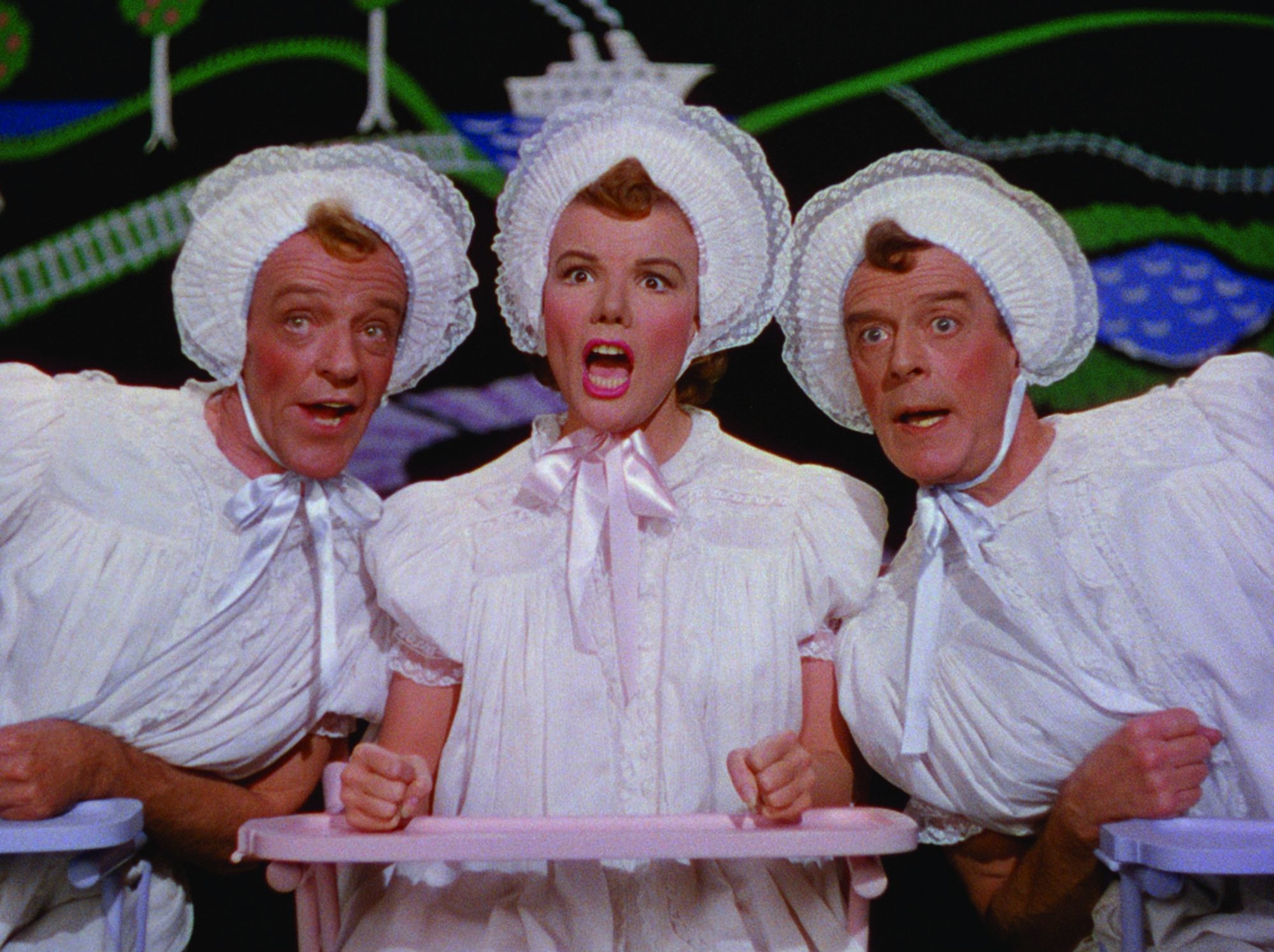 The apotheosis of the backstage musical, The Band Wagon is a genuine landmark in the movie musical and probably Fred Astaire’s most satisfying film since the 1930s.  It combines a cornucopia of melodic songs, a witty and perceptive screenplay, stylish and incisive direction by Minnelli, and a remarkably adroit array of leading players in a seamless collaboration.  Also, with the considerable assistance of Michael Kidd’s choreography, Astaire is in dazzling form.

On the surface the plot couldn’t have been more unprepossessing:  a passé hoofer (Astaire), a lofty ballerina (Charisse), a breezy married writing team (Oscar Levant and Fabray), and a quadruple-threat impresario/director with limitless talent and even more flamboyant ego (Jack Buchanan) incongruously join forces to produce a musical.  Along the way egos clash resoundingly as the forces of light-hearted diversion (Astaire) give way to arty pomposity (Buchanan).  It is made plain from the start that the classics, when done “straight”, are both artistically and commercially acceptable; only the wanton mixing of classical and pseudo-popular elements is apt to lead to ludicrous failure.  When the show opens in New Haven, to the accompaniment of frayed nerves and soured relationships, it is a hopeless catastrophe.  Ultimately, of course, out of devotion to a common cause, the dissonant personalities collaborate to create the predictable smash hit at fade-out.

But, of course, the numbers are the most important factor.  The lightly mocking tone is set early, when Astaire, as a fading star, gets off a train, thinking that the reporters gathered at the station are waiting to welcome him, then walks philosophically away after being brushed aside by the press in favour of Ava Gardner, chanting the haunting ballad “By Myself.”  In a penny arcade, he taps with all the old elegance and looseness to “A Shine on Your Shoes” executing one more of his tap-slap-happy tours de force.  Astaire and Cyd Charisse spin bewitchingly through “Dancing In the Dark”, a slow, languid waltz-type duet which perfectly captures the true genius of Astaire.  “We’re from two different worlds, two eras, yet we’re supposed to dance together,” sighs Tony to ballerina Gaby, and one of the joys of The Band Wagon is the brilliance with which Astaire and Charisse do indeed transcend their own differences.  Very much the product of the sinuous, Americanized ballet tradition which Gene Kelly epitomized, Charisse tempers her formidable sensuality with a lyrical grace which unexpectedly compliments Astaire’s.  Their sumptuous “Dancing in the Dark” duet evokes the Astaire of old with an added Charisse fillip of stylized earthiness.  When joined by Levant, Fabray or Buchanan, Astaire asserts his own brand of unpretentious gaiety–often to tunes he had introduced in the original stage Band Wagon twenty-five years before–gleefully toddling with Buchanan and Fabray in the squalling, fratricidal “Triplets,” or partnering Buchanan with the airy grandeur of “I Guess I’ll Have to Change My Plan,” both teaching a lasting lesson to this perfect soft-shoe tune.

Fabray and chorus render with bucolic gusto “Louisiana Hayride,” and “I Love Louisa.”  A Mittleuropa burlesque is performed with equally catching rhythm by Astaire, Fabray, Levant, and supporting ensemble.  The definitive celebration of theatre, “That’s Entertainment,” is put across with great swing and professionalism, Astaire clambering with colleagues over the backstage debris for Dietz’s and Schwartz’s anything goes show biz anthem.

The climax of the picture, nevertheless, is the peerless “Girl Hunt” ballet, Astaire bringing a note of no-nonsense satire to the steamy solemnity of Charisse’s undulations–underscored by laconic, poker-voiced dialogue on the sound track (“She was scared–scared as a turkey in November”) while he dances the role of the private eye on screen.  On the surface a witty send-up of macho Mickey Spillane’s tough lusty pulp fiction, underneath “Girl Hunt” is really a sly pastiche of those achingly serious Gene Kelly ballets which some esthetes felt had exalted the musical into the realm of Art.  As choreographed by Michael Kidd, Astaire stalks his comic-strip urban turf, and clutches the languorous Cyd with the agony of true lust while she envelops him in yard after yard of black-stockinged gam.  The one thing that differentiated this number from Kelly’s “Broadway Melody” in Sing’ In the Rain is that this one knows perfectly well how hilarious it is.

What separates The Band Wagon from its predecessors is the fact that Comden, Green, and Minelli know this milieu intimately and care about it passionately, all of which makes all those limp show-must-go-on clichès resound with a vitality and conviction they rarely had before.  Bosley Crowther in the New York Times called it “One of the best musicals ever made” and to this we can only say “Amen”, thus ending on a high note our series of summer musicals and hoping that you have enjoyed seeing them as much as we have enjoyed presenting them to you.