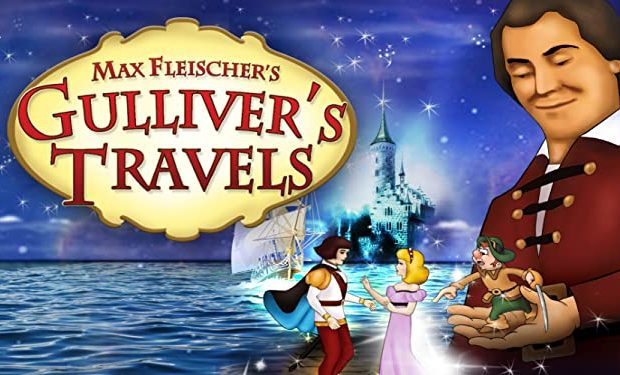 This animated version bears very little resemblance to the 1726 satire written by Irish writer and clergyman, Jonathan Swift. In his book, Gulliver’s Travels, Swift satirised both human nature and a popular genre in his time, known as “traveler’s tales”. Traveler’s Tales were outdoor literature, nature writing, guide books and

travel memoirs, and were very popular in 18th century Britain. The equivalent of today’s bestsellers, many writers became famous in this genre, including Captain James Cook for his diaries published in 1784.

In Swift’s book, Gulliver visited a number of strange lands. This animated film only features one of Gulliver’s adventures, in which he is a giant in the land of Lilliput. Swift’s social commentary is changed from which side of an egg should be cracked, to a charming love story of a prince and princess and the argument between their respective fathers over the national song to be sung at the wedding; the result is war!

A little bit of history here to understand how things get done. Disney’s Snow White and the Seven Dwarfs was released in 1937 and became a huge success and instant classic. Paramount executives saw this success and wanted to capitalize on it by producing their own animated feature. They hired Fleischer Studios to make the Technicolor musical; at the time, Fleischer Studios were also making the popular Popeye the Sailor Man cartoons.

Initially, the idea was to have Popeye be Gulliver and call the film Popeye’s Travels but the idea was quickly scrapped. Instead, the film was made with a mix of conventional animation and rotoscoping which was used to animate the characters of Gulliver, the prince and the princess. Rotoscoping has the animators trace over live action motion picture footage, frame-by-frame, to produce a more life-like look.

So, while all the secondary characters are what we recognize as cartoon characters, Gulliver, the prince and princess resemble real people. A radio announcer, Sam Parker, was not only the voice of Gulliver but also the film model. Rotoscoping has been used in a number of animated features (in the pre-computer age); popular by all animation studios including Disney (Cinderella, Fantasia, Pinocchio to name a few). In 1981, it brought to life the rock ’n roll classic, Heavy Metal.

Enough digressing; back to Gulliver’s Travels! The film was released to just fifty theatres for the 1939 Christmas season and it was a box office success, making $3.27 million; close to $63 million in today’s market. Listen closely to the lovely music; Victor Young received an Oscar nomination for Best Original Score and the song Faithful/Forever, written by Leo Robin and composed by Ralph Rainger, was nominated for Best Original Song. Alas, the 1939 Academy Awards saw some tough competition; it was the same release year of MGM’s The Wizard of Oz.

Such a popular novel, many film versions of Gulliver’s Travels have been made over the years, often only picking one, two or three of the stories. Eventually, Popeye the Sailor got his chance to play Gulliver in the TV version ‘Popeye’s Travels’ made for the Popeye The Sailor television series in the 1960’s. An Austrian silent film of the story was made in 1924 and, over the years, several international animated films have been made. French motion picture innovator, Georges Melies, made a 1902 silent short film released in the United States as Gulliver’s Travels Among the Lilliputians and the Giants, in which he used many of the technical and narrative developments he pioneered. Look up Melies’ 1902 short film, “A Trip to the Moon” and you’ll recognize his work, such as the scene of a grouchy Moon getting a rocket ship stuck in his eye.

Those of us of ‘a certain age’ will more readily remember one of the more popular Gulliver offerings: the live action film The Three Worlds of Gulliver (1960) starring Kerwin Matthews and with special effects by Ray Harryhausen (The 7th Voyage of Sinbad and Jason and the Argonauts just to name two films in a spectacular career – Harryhausen is the Godfather of stop motion animation and special effects).

There is a terrific television mini-series of Gulliver’s Travels starring Ted Danson made in 1996, with a fantastic cast including Mary Steenburgen, Peter O’Toole, Omar Sharif, John Gielgud and special effects by Jim Henson’s Creature Shop. Well worth watching, if you can access a copy. In 2010, Gulliver’s Travels was made starring Jack Black, clowning around like…well, Jack Black; the less said the better.

Enjoy 1939’s Gulliver’s Travels, sing along to the tunes, and stick to the classics!

Gulliver’s Travels character designer Charles Thorson is the only known Canadian in the movie’s cast and crew. It’s fortunate, then, that his is a rather fascinating story.

Born in Winnipeg on August 29th, 1890, Thorson grew up in Gimli, Manitoba, then as now the epicentre of that province’s Icelandic population, which was his own heritage. From the beginning, he was drawn to art (pun intended), working as a freelance illustrator and political cartoonist. For 20 years, from 1914 until 1934, he was chief illustrator for the Eaton’s catalogue, in which all the images were inked by hand.

Thorson’s life did not run smoothly; part of the blame for that would have to lie with his temper, which was mercurial. The worst year for him was 1916, when he lost both his wife and his brother Stephen. Three months later, his only child, son Karl (known as Charlie), also died. Thorson remarried in 1922 and had two more sons. The first, another Karl/Charlie, died within three days. The second, Stephen, survived, but had a rocky relationship with his father, perhaps owing to the fact that the elder Thorson was a heavy drinker who ended up divorcing his wife in 1931.

A few years later, Thorson moved to Hollywood, where he found work at the Disney Studio. At age 45, he was a generation removed from most of his colleagues and a good 10 years older than Walt himself. The job only lasted a couple of years – Thorson stormed off because, like most animation artists, he wasn’t credited for his on-screen efforts – the largest of these being his rendering of Snow White for Disney’s first full-length animated feature. She was based on Kristin Solvadottir, a young Icelander who worked briefly as a waitress in Thorson’s favourite bar-café in Manitoba. This factoid led to the common belief that Snow White herself was Icelandic.

He was brought onto Gulliver’s Travels at the last minute, so his input was limited – mainly to a crazy bird character called Twinkletoes and some bits of comic business. Later, at Warner Brothers, he would have a greater impact. Not only did he develop prototypes and finished characters for Elmer Fudd, Little Hiawatha, Sniffles the Mouse and Inki, his was the earliest successful version of Bugs Bunny. He also gave the wascally wabbit his moniker: Commissioned to design the rabbit for a cartoon to be co-directed by Ben “Bugs” Hardaway, Thorson labelled his model sheet “Bugs’ Bunny,” and the name stuck.

When he ran out of studios to run out on, Thorson went back to advertising, and penned two popular children’s books about the adventures of an indigenous boy: Keeko (1947) and Chee-chee and Keeko (1952). Canadians of a certain age may best remember his teddy bear character Punkinhead, which appeared in several children’s books and in Eaton’s catalogues for many years, as well as Elmer the Safety Elephant, created for a school-based safety campaign. Somewhere along the way, too, Thorson helped design The Flintstones, and wrote a handful of story ideas for the animated Hanna-Barbera TV series of the same name.

In 1956, finding work hard to come by, Thorson retired to British Columbia, where he died a decade later, at the age of 75. It turns out he was right to be righteously angry about the lack of picture credits for animators: His contributions to major pieces of pop culture are little recognized, even today. But surely he would be chuffed to see the acres of screen credits today’s animators now enjoy.