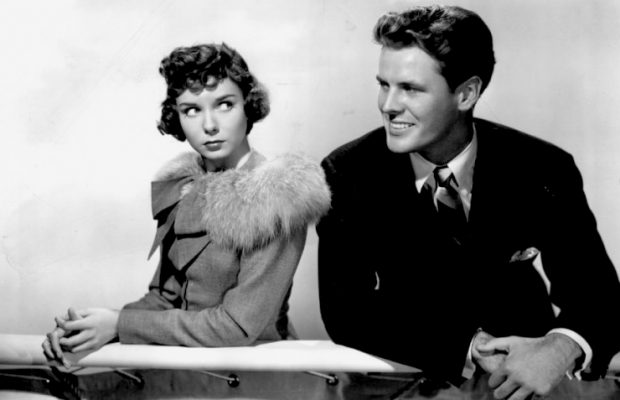 Toronto Film Society presented Our Hearts Were Young and Gay (1944) on Sunday, November 10, 1985 in a double bill with Cluny Brown as part of the Season 38 Sunday Afternoon Film Buffs Series “A”, Programme 2.

This affectionate, light-hearted look at flapper-era teenagers let loose on an unsuspecting Europe was grandly launched in its studio publicity with “20 million laughed at the famous book–the whole world will roar at the picture!”  Perhaps a slight overstatement, but the film still garners some nostalgic chuckles at the zany misadventures of Skinner and Kimbrough.  The memoirs did have a particular appeal for audiences who were weary of war films and slick, sophisticated comedies–even though the story was seen as “light as a marshmallow and sometimes as cloyingly sweet” (N.Y. Times, Oct. 12, 1944).

The British-born Lewis Allen, who had made an exciting suspense thriller in his first film, The Uninvited (1944), was engaged to adapt the charming, unpretentious story to the screen with the two young ingenues who were part of the Paramount group of players.  Diana Lynn and Gail Russell had both been in the previous year’s Henry Aldrich Gets Glamour (Paramount’s answer to the MGM Andy Hardy movies, which initially starred Jackie Cooper as Henry–later replaced in the serials by Jimmy Lydon), and were teamed here as the ingenuous authoresses in the 20’s “when wolves were sheiks and sweater girls flappers”.  Allen would go on to make a series of films for Paramount and later be hired by Hal Wallis to effectively handle the British story So Evil My Love (1948) with Ray Milland, Ann Todd and Geraldine Fitzgerald.  His output was considered competent and entertaining, especially the 1958 melodrama Another Time, Another Place with Lana Turner, Barry Sullivan and a young Sean Connery.

Russell and Lynn (as well as Edwards and Brown as the young juveniles) went on to make a sequel, Our Hearts Were Growing Up (1946), but their careers never fully realized the potential shown in Our Hearts Were Young and Gay.  Their tragic ends (Russell from alcoholism at 36, Lynn from a stroke at 45) perhaps make these early films more touching in their portrayal of innocents.  The supporting cast is also of note, with Ruggles doing a sedate job as the famous actor-manager and Dorothy Gish in her film comeback.  Beulah Bondi, as the imposing lady traveller who has a run-in with the footloose adolescents, is as competent as always.  She had the excellent reputation of never being typecast as a character actress, and could play the most hateful or the most tender of characters with equal aplomb.

This smoothly directed montage of captivating tourist escapes will still delight sentimental viewers in a film “as durable as a nosegay or forget-me-not, but just as charming.”