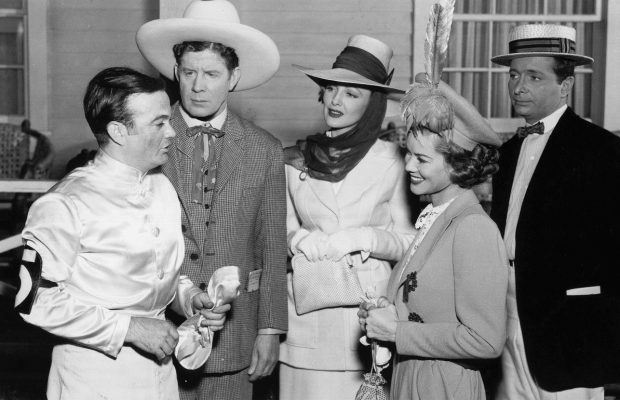 Toronto Film Society presented So This Is New York (1948) on Monday, February 20, 1989 in a double bill with Abbott and Costello Meet Frankenstein as part of the Season 41 Monday Evening Film Buffs Series “D”, Programme 4.

An off-beat and very funny film of 1948, So This Is New York is based on a Ring Lardner story, circa 1919, about some hicks who are taken in by the big city, and is a wide-open platform for the New York misadventures of Ernie Finch (Henry Morgan), his wife (Virginia Grey), and his marriageable sister-in-law (Dona Drake).  They travel to the big city on money recently willed to them, to have a good time and to find a wealthy husband for the sister-in-law.  Among the unsuitable candidates for marriage are found a gambler, a Southerner, a jockey, an antique dealer and a comedian.  Quite an eclectic group! 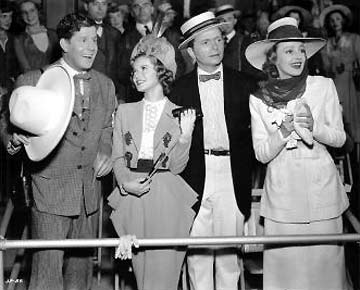 Radio and television comedian Henry Morgan makes his feature film debut and as Variety commented at the time: “He won’t disappoint his air fans by his screen comedics.  His drollery is still acid, varying between wryness and nastiness, and his nonchalance is left unperturbed by the cameras.”

Although the film is modestly budgeted at best, the money has definitely been spent in the right places, script and cast as opposed to backgrounds and setting.  Just look at the first rate group of supporting players!  Rudy Vallee is superb in his portrayal of a track tycoon.  Leo Grocey as a crooked jockey puts his “Dead End Kids” training to hilarious use.  And Morgan’s radio sidekick, Arnold Stang, is perfect in his single scene.  Note, too, the amusing use of sub-titles when Morgan steps out of Grand Central Station upon his arrival and encounters a sample of New Yorkese from a local cabbie.  The film is crammed with this type of suggestive comedy and the laughs are deftly dropped and not hammered home as so often happens, for which we can thank director Richard Fleischer.

One does not think of Richard Fleischer as a director of comedy, although anyone who say his 1980 remake of The Jazz Singer with Neil Diamond may disagree.  With the exception of tonight’s film and The Happy Time (1953), his films are definitely on the darker side.  In the 1940s he established himself as one of RKO’s Quality minor directors, with films like Follow Me Quietly, Armored Car Robbery and The Narrow Margin.  He also seems to like reconstructing famous murder cases such as The Girl in the Red Velvet Swing (the Nesbit-Thaw case), Compulsion (the Leopold-Loeb case, The Boston Stranger and Ten Rillington Place (the John Christie murders in England).  Despite a rather uneven directing career, his handling of So This Is New York is impeccble.

I cannot finish without mentioning dear old Rudy Vallee, that consummate character actor, usually playing the ineffectual suitor who doesn’t get the girl.  Ironic, in a way.  Before Presley there was Sinatra; before Sinatra there was Crosby; and before Crosby there was Rudy Vallee…and his megaphone.  He was the crooning idol of thousands of flappers as he led his band, the Connecticut Yankees, through the jazz era.