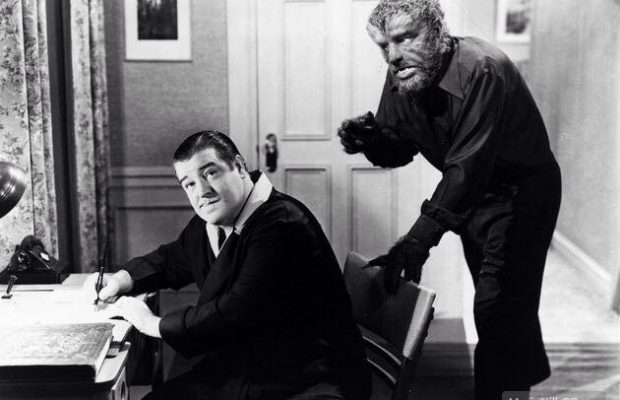 Toronto Film Society presented Abbott and Costello Meet Frankenstein (1948) on Monday, February 20, 1989 in a double bill with So This Is New York as part of the Season 41 Monday Evening Film Buffs Series “D”, Programme 4.

Abbott and Costello Meet Frankenstein is a happy combination both for chills and laughs.  The comedy team battles it out with the studio’s roster of bogeymen in a rambunctious fracas that is funny and, at the same time, spine-tingling…Stalking through the piece to add menace are such characters of horror as Frankenstein Monster, Dracula and the Wolf Man….Loosely-knit script depicts a monster growing weak.  His master, Dracula decides to transfer Costello’s brain to the Frankenstein creation.  As a lure, the batman uses the wile of Lenore Aubert to soften the fatman and maneuver him into proper setup.  The dimwit finally catches on and, with expected heroics, does in the heavies in a hilarious chase finale.  Through it all runs the Wolf Man as a sympathetic character who tries to warn the heroes against the plot but, unfortunately, proves a bit of a menace himself whenever the moon rises and changes him into a killer.  Abbott and Costello work with less of their standard routines than usual, but keep the fun at high level.  Bela Lugosi as Dracula: Glenn Strange, the Monster; and Lon Chaney, the Wolf Man, bulwark the thrills and chills.  Miss Aubert, Dracula’s tool; Jane Randolph, an insurance investigator; Frank Ferguson, operator of a horror museum and Charles Bradstreet, a doctor, round out capable casting.  The Robert Arthur production is neatly tied together by Charles T. Barton’s direction.  Latter realizes on all the fun possible and misses no bets in sharpening blood-curdling sequences. 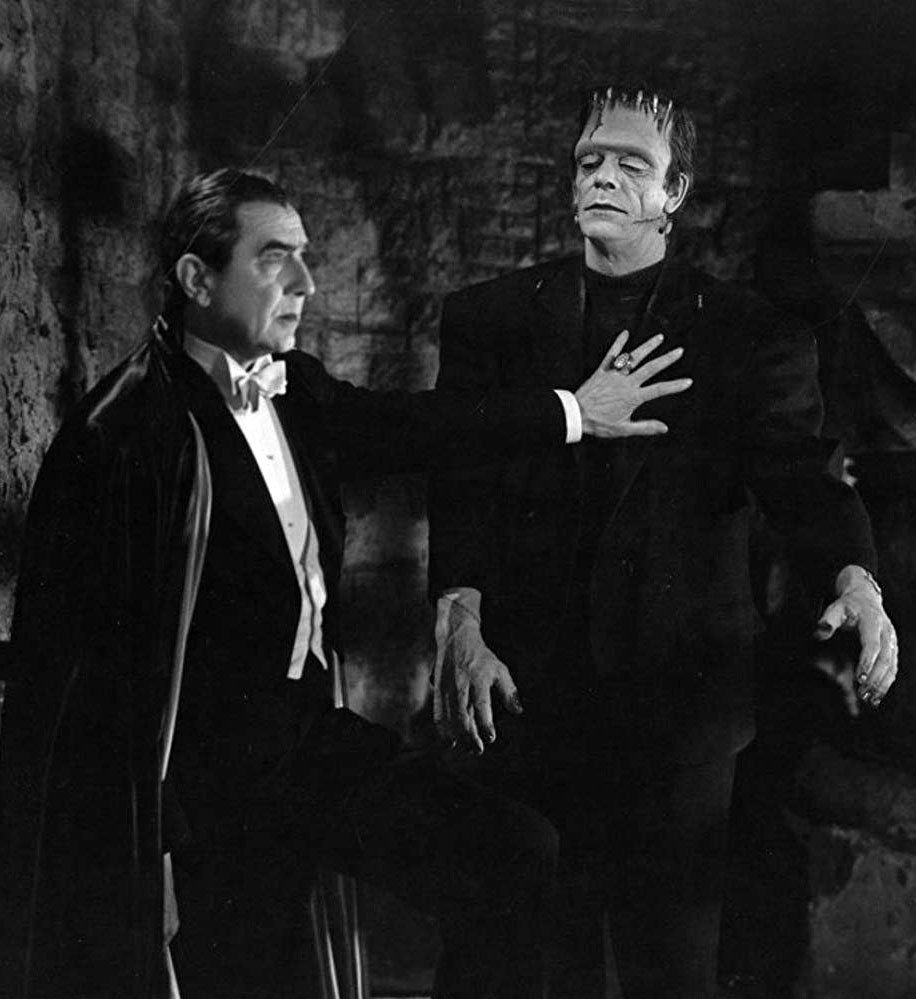 Leonard Maltin has attempted to analyze the reason’s for the team’s phenomenal success in the late 40’s and early 50’s:

If Abbott and Costello are remembered for anything, it is certainly their ‘Who’s on First?’ routine….But too many people who like the routine are willing to dismiss Abbott and Costello as patter comedians who happened to have a good piece of material.  If this was the case, they never would have achieved such phenomenal popularity as movie stars in the 1940’s and early ’50s.  The beauty of ‘Who’s on First?’ is in the enactment by Abbott and Costello.  In this routine, as in all their work, the roles assumed by Bud and Lou are integral to the humour of the piece.  As Jim Mulholland points out in his assessment of the underrated Bud Abbott, “In order to be a good straight man, you must be a good actor.  And Bud was….Bud could make the most audacious statement seem sound and logical.”  Lou Costello’s obvious comic asset was his incredibility as the patsy who was engulfed by Abbott’s “logic.”

Lou Costello’s character was basically that of an overgrown little boy.  He was a most endearing character to movie audiences of the 40’s–a mischievous kid, incapable of feeling hatred, who will nevertheless often take a dislike to someone in a pouty, childish way.  His tremendous compassion and naivete make him a mark for every sharpster who comes along.

By contrast, Bud Abbott was not a terribly likeable character in the team’s films.  He was a genius primarily at concocting ideas that would throw all the risk on the shoulders of his partner while guaranteeing all the rewards to himself if things went well.

Abbott and Costello arrived in Hollywood with their personalities already established in their burlesque, Broadway and radio routines.  Since they barely participated in the making of their films, except as performers, they were at the mercy of their writers and directors.  Their films soon became wildly inconsistent in quality and by the mid-50’s, they were turning out some dreadful ones.  As their careers took a downhill turn, tensions between the pair were exacerbated and their battles on and off the set became legendary.  For the early part of their careers, however, their old standby gags and routines worked, because they were funny, and because Abbott and Costello performed them with such vim and vigour.

Leonard Maltin sums up: “Blatant disregard for characterization, plot or consistency in their work kept Abbott and Costello from ever joining the ranks of great film comedians.  But steadfast dedication to getting laughs put them in the front ranks of audience popularity for ten years and keeps their best films fresh and funny today, as they continue to deliver those surefire laughs.  And that’s no small accomplishment.”