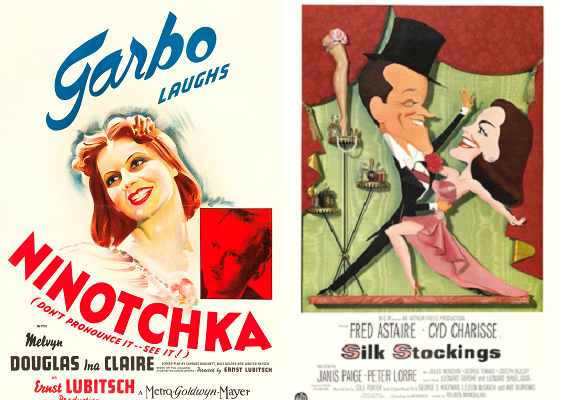 While Nintochka was in production, the Russo-German pact was signed, opening the way, within a week, for Hitler’s incursions into Western Europe.  While Silk Stockings was in production, the Soviet Union invaded Hungary, and the Suez crisis exacerbated East-West tensions.  Both films reflect the western view of the Soviet Union of their times, but Silk Stockings much more leniently: Ninotchka, in a memorable gag at the Paris railway station, implies that Nazi and Bolshevik are indistinguishable; Silk Stockings uses the word “communist” only once, and the most objectionable feature of the film to a Russian might be its treatment of Tolstoy!  Both films have a female Russian commissar come to Paris to discipline three lesser officials who have fallen prey to bourgeois capitalist seductions, only to fall prey to them herself, in the person of the hero.  But Silk Stockings trivializes the idea: in the earlier film the officials are in Paris to recover Czarist treasures, in the later film to expatriate a composer who is working on a Hollywood version of War and Peace.  The hero of Ninotchka, a Parisian playboy acted by Melvyn Douglas in his prime as a suave leading man, is replaced by a Hollywood producer, acted by Fred Astaire past his prime, in fact in his last picture as a singer-dancer.  While it may be possible to say once too often that Cyd Charisse is not Garbo, one certainly misses the endless series of sly digs in Ninotchka at the Soviet system and leftist ideology generally, which come to an end only with the fade-out on Kopalski’s one-man picket line.  One is disappointed, too, to find Garbo’s remarkable definition of love, in purely chemical terms, transformed (for even Porter nods occasionally) into: “If the electro-magnetic of the he-male,/Meets the electro-magnetic of the female.”  One last indicator of the vulgarization of Ninotchka and Silk Stockings might be the central symbol of capitalism in each film–the Parisian hat which registers Garbo’s changing values, and the silk stockings which register Cyd Charisse’s.  There is a simple propriety about each symbol, for Garbo’s most memorable feature is her face, and Charisse’s is her legs, which, one reviewer suggested, should be declared “a national shrine.”  But whereas Garbo’s capitulation to the hat (and then to a tiara) subtly charts her progress towards capitalism, the simulated “nude” scene in which Charisse changes into her silk stockings is not only less than subtle, it also may remind us of the use of stockings as the currency of prostitution in postwar Europe in A Foreign Affair, by Lubitsch’s principal heir, Billy Wilder. 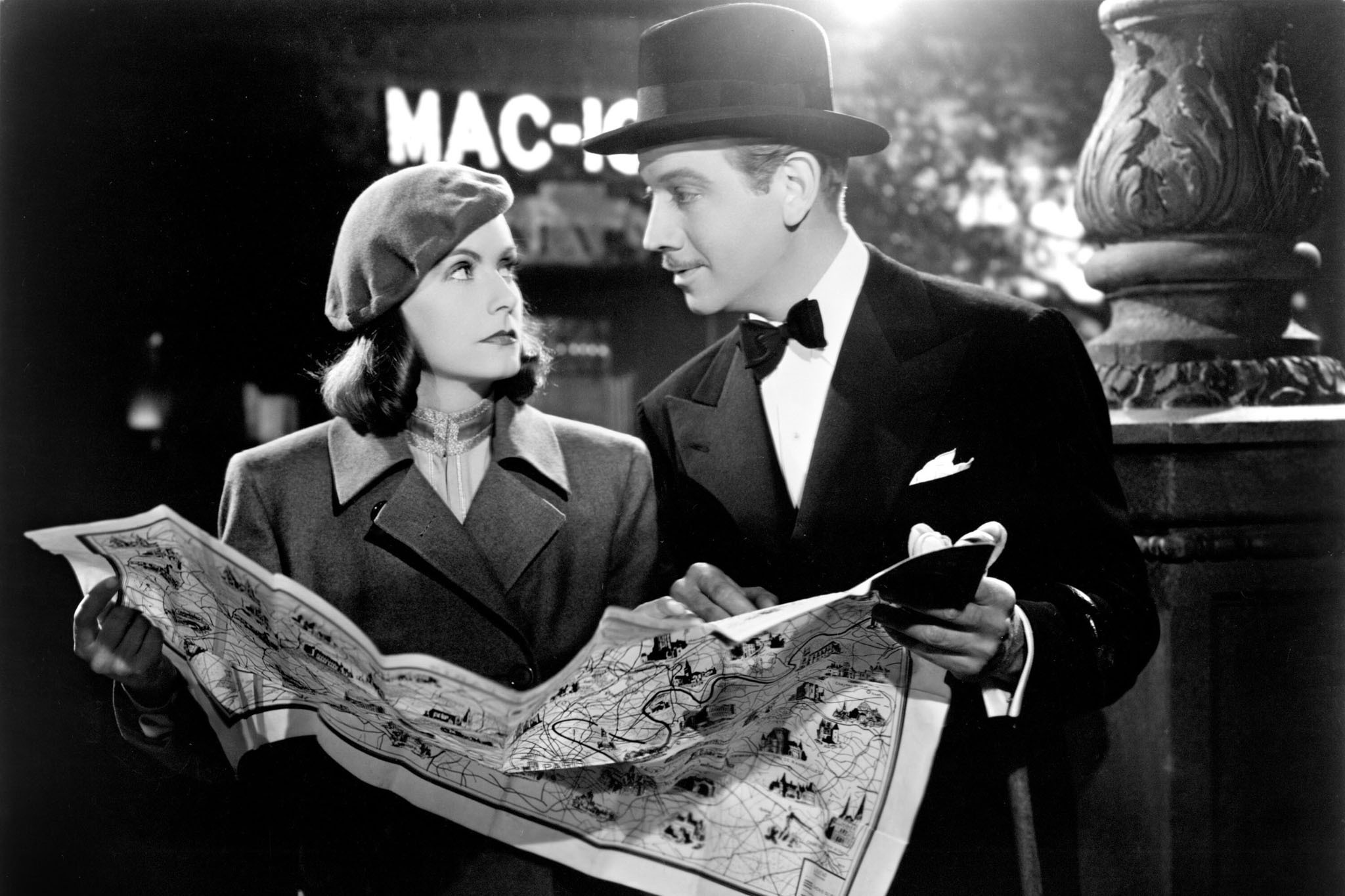 Silk Stockings is a twice-removed re-vision of Ninotchka, being based more directly upon a stage musical written by George S. Kaufman and others, and scored by Cole Porter, which had had a successful run on Broadway in 1955, with Hildegarde Neff in the Garbo role, and Don Ameche (!) in Douglas’s.  (Ninotchka was also re-visioned in 1956 as The Iron Petticoat, with Katharine Hepburn and Bob Hope–but let us draw an iron curtain over that).  The filmed musical, as was common in the 1950s, laundered some of the more racy stage lyrics: a “mouth,” rather than a “bosom,” is five feet wide in the “Stereophonic Sound” song.  The principal change the film makes in Kaufman’s book is in the direction of feminizing the heroine (it would be rash to deny that one of Garbo’s main charms was always her bisexual quality), and by emphasizing the love story, “the main theme of our picture,” as Mamoulian called it.

Aside from some earlier Porter songs interpolated as background (“I’ve Got You Under My Skin,” “You’d BE So Nice To Come Home To”), the best song in Silk Stockings is only tenuously connected to the film’s main theme, being rather a pillorying of Hollywood elephantiasis in the ’50s–“Glorious Technicolor, breathtaking Cinemascope, and Stereophonic sound.”  Since Silk Stockings had all of these, the satirical intent is undermined rather than underlined.

The inferiority of Silk Stockings to Ninotchka is really to be traced to two factors.  First, was there ever a musical remake superior to its original?  A musical remake is almost always based on a solid success, so that it begins by coming from behind.  The only arguable exceptions are film musicals based on stage successes themselves based on earlier films, as Silk Stockings is: like Annie Get Your Gun, The King and I, Camelot.  But most of these are photographed stage productions exploiting filmic techniques rather than cinematic works of art.

The second factor here is the talents working on the two films.  The two directors, Ernst Lubitsch (1892-1947) and Ruben Mamoulian (b.1898 or 1899), were both emigres, Lubitsch an established filmmaker in Germany before Mary Pickford brought him to Hollywood in 1924, Mamoulian a stage director with experience in the Mosco Art Theatre before coming to the United States, via the English stage, also in the mid-twenties.  Lubitsch, after making a handful of silent comic masterpieces, reached his peak in the 1930s and early ’40s with a series of works representing perhaps the apogee of screen comedy–Trouble in Paradise, Ninotchka, The Shop Around the Corner, To Be or Not to Be.  As he himself said, “I probably never was sharper than in Ninotchka, and I feel that I succeeded in the very difficult task of blending a political satire with a romantic story.” 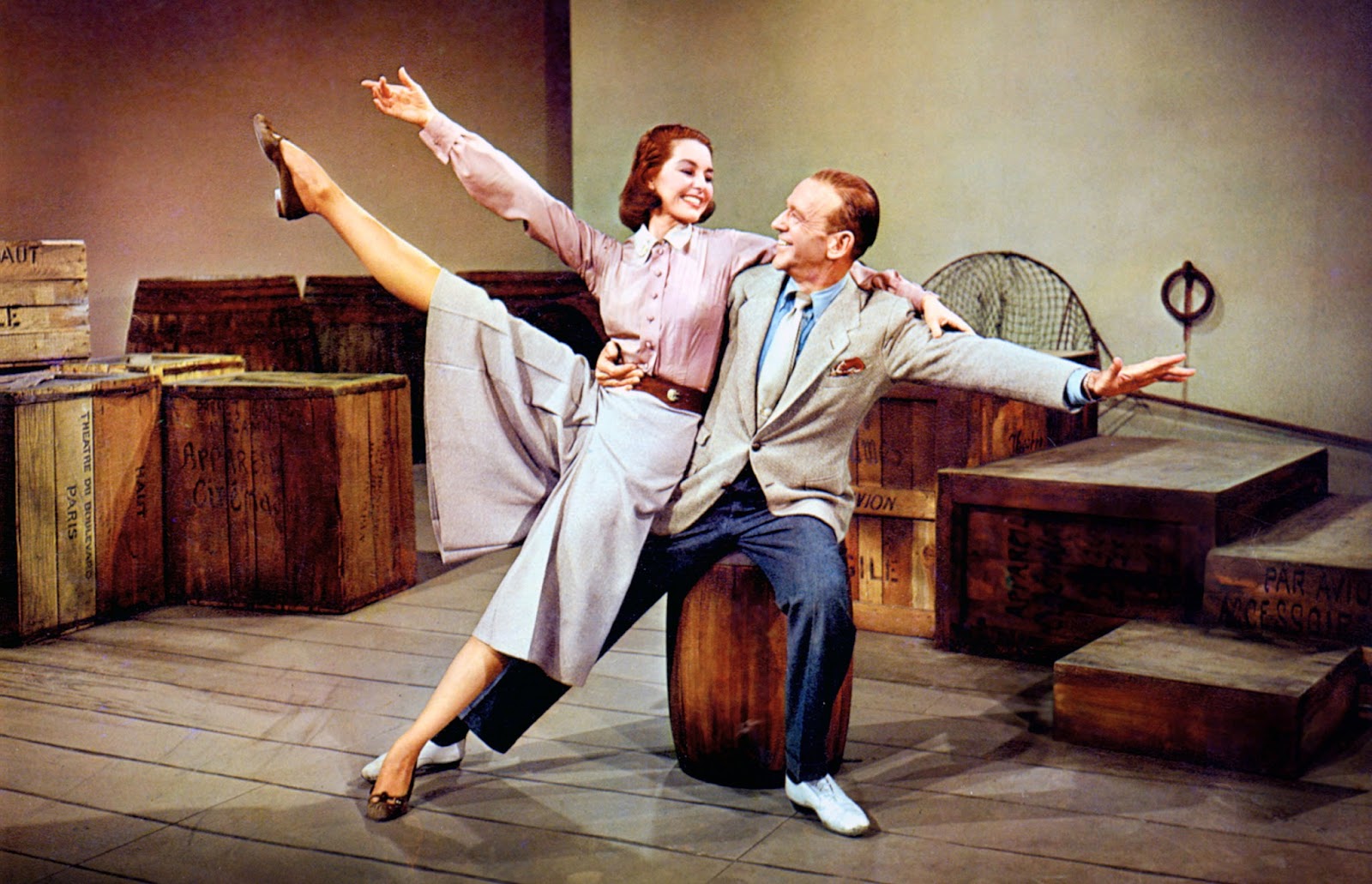 Mamoulian began directing in the early sound period, and quickly earned a reputation as an innovator of great versatility, making two of the best early musicals (Applause, Love Me Tonight), one of the best gangster pictures (City Streets), and one of the best horror pictures (Dr Jekylll and Mr Hyde, with Fredric March).  He directed Garbo in Queen Christina (the famous publicity line for Ninotchka was “Garbo Laughs!”, but she had laughed for Mamoulian here), but thereafter declined as an artist, fell into conflict with the studios, losing his place on three films that might have reestablished him–Laura, Porgy and Bess, and Cleopatra.  Silk Stockings, which his admirers regard as “a vastly underrated poetry-in-motion musical,” is his last film to date.  On it, too, there was conflict with the producer, Arthur Freed, of such a kind as to raise some question as to the film’s authorship: since 1939, Freed’s name had been more or less synonymous with the MGM musical; he had produced, amongst many others, Meet Me in St. Louis, Easter Parade, On the Town, Show Boat (1951), An American in Paris, Singin’ in the Rain, The Bandwagon.  His earlier collaboration with Mamoulian, Summer Holiday, had been a critical and financial disaster.  Mamoulian, however, who made only sixteen films in a lengthy career, is also given credit for revolutionizing the stage musical in the ’40s–he directed the original Broadway productions of Oklahoma! and Carousel.  So that this last double bill of the summer virtually lays the question on the line: if this trio of Freed, Mamouian and Porter (not to mention Astaire) could not make a superior musical re-vison, then who could?

Of the other talents at work on the two films, one should mention Brackett and Wilder (joined here by Walter Reisch, whose appearance at a screening of Ninotchka at the OFT last year was a notably witty occasion), the scriptwriters for Ninotchka, as well as for all Wilder’s films up to Sunset Boulevard.  William Daniels photographed most of Garbo’s films, as well as several of Von Stroheim’s including Greed.  George Tobias is the only actor who carried over from the stage play into the film musical; he has a small part in Ninotchka as well.  The presence of Peter Lorre in Silk Stockings does not quite compensate for the absence of those incomparable Lubitsch auxiliaries, Sig Ruman and Felix Bressart.  And the casting of Bela Lugosi as the head commissar, his only comic role, may be, in a stroke of allusive genius, the final, definitive comment on the self-consuming vampirism of the Soviet system.