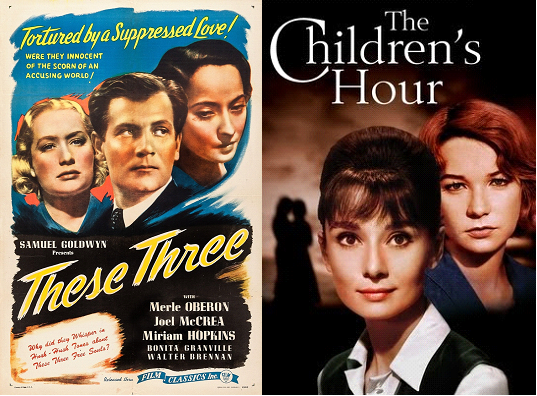 Two school teachers were accused of homosexuality by one of their students and the schoolgirl’s grandmother spreads the rumour.  Ready belief that the rumour was true resulted in the ruin of the teachers and their school.  Theses events are related in William Roughhead’s Bad Companions.  Roughhead was a Scottish lawyer and the events are situated in the Edinburgh of 1810.  According to Earle F. Walbridge, this constituted the source material from which Lilliam Hellman developed her first Broadway success, The Children’s Hour.

Samuel Goldwyn purchased the film rights to The Children’s Hour in 1934 for $35,000 (this was often reported as $50,000) in spite of the fact that the Hays Office had prohibited not simply the use of the title or the plot but even the fact of the purchase itself.  This extreme prohibition on the part of the Hays Office actually worked to Goldwyn’s advantage since the purchase became the joke of the year and people who wrote about film, in spreading the joke, gave him more free publicity than he would have been able to purchase had the Hays Office allowed it.  When the bowdlerized version entitled These Three appeared, most people knew it was derived from The Children’s Hour which was still in its original run on Broadway.  Actually, These Three as directed by William Wyler from the screenplay by Lillian Hellman retains a surprising number of lesbian intimations, for example, Wyler chooses to photograph Miriam Hopkins with her back to the camera making her confession of love ambiguous as to whether it is directed to Joel McCrea or Merle Oberon.  A number of critics have attributed the dramatic impact of These Three to its lesbian subtext rather than to its explicit theme of the power of malicious statements to injure reputations.  Nevertheless, Wyler felt that in bowdlerizing the text, his film had been compromised.

This dissatisfaction on Wyler’s part led to his second attempt to film the Hellman play 25 years later, at which time, a 10 year lease on the film rights cost $350,000.  Unfortunately, Hellman had finished no more than an outline for the new script that Wyler wanted when Dashiell Hammett died and she lost interest in the project.  She did read the script written by John Michael Hayes and evidenced her displeasure with it with notations of “no good–L.H.”  Hayes’ screenplay is, in the opinion of Lillian Hellman, overly faithful to the original play; she says she would have modernized it and brought it up to date.  Indeed in many elusive ways The Children’s Hour does appear to be the product of an earlier age and though the performances of Shirley MacLaine and Audrey Hepburn have been praised it has frequently been remarked that the film conveys less dramatic impact than one would have expected.  For what was supposed to be a courageous “unbowdlerized” film, it betrays a strange squeamishness, for example, although the original play openly used the word “lesbian” in the 1930’s, the film assiduously avoids it in the 1960’s. 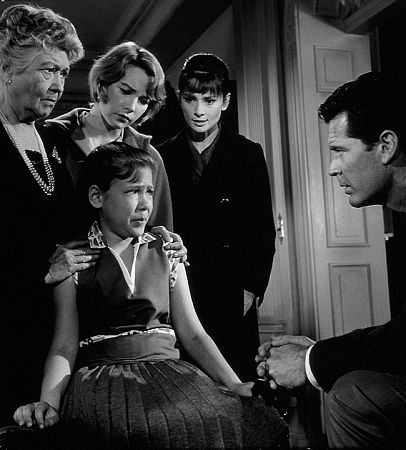 The harshest criticisms of The Children’s Hour have maintained that the plot is unbelievable and that the unsubstantiated accusation of homosexuality would not be believed (c.f. Pauline Kael).  Jean Cocteau has observed that “Immorality and unseemly behaviour are just about the only things people unhesitatingly allow us, generously distaining to take security for the loan”.  More to the point, the two most readily believed accusations were, in the 1930’s (and probably still are) homosexuality and communism.  Given Hellman’s strong leanings toward the political left, the accusation of “lesbian” in The Children’s Hour probably was essentially a dramatic stand-in for accusations of “communist”, which would have been more personally relevant to her.