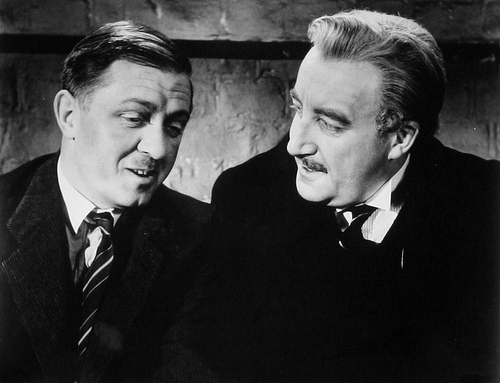 The Toronto Film Society presented The Dock Brief [Trial And Error] (1962) on Monday, July 16, 2012 in a double bill with Too Many Crooks, as part of the Season 65 Summer Series, Programme 2. 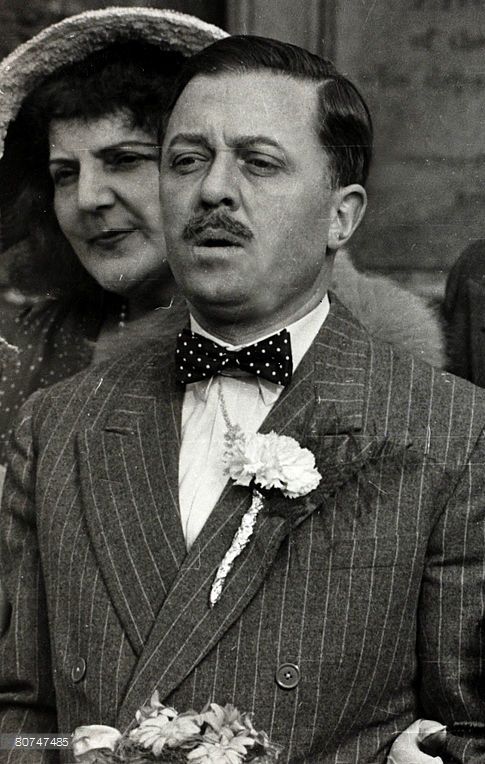 This seldom-seen little film is based on a one-act play by John Mortimer, creator of “Rumpole of the Bailey.” It features Peter Sellers in one of the many, varied roles he played in British cinema before the worldwide success of The Pink Panther thrust him (uncomfortably, and with mixed results) into mega-stardom in 1963. Here Sellers plays the worst barrister in the Old Bailey, who hangs around court hoping for a “dock brief” – a public-defender case for a needy accused – as his only means of getting any work at all. It also features a fine performance as the defendant by Richard Attenborough, a busy actor before he eventually branched out as a producer and esteemed director. They play unsuccessful, unimportant men whose bleak lives have already confined them long before they stepped into a courtroom or cell. The film is full of images of confinement – prison cells, bird cages, claustrophobic houses – that underscore their dreary situations. Yet it manages to end on a bittersweet, charming note – wait for it.

Some actors are drawn to the profession because they lack a firm identity or personality of their own. In 1977, when PETER SELLERS appeared as a guest star on the television show The Muppets, he opted not to appear as himself at all – instead appearing with a variety of costumes, characters and accents. Finally told by host Kermit the Frog that he could relax and be himself, Sellers replied that this would be impossible. “You see, there is no me. I do not exist,” he explained to the befuddled puppet. “There used to be a me, but I had it surgically removed.”

It was a funny line, but he really wasn’t joking. “If you ask me to play myself,” once remarked, “I will not know what to do. I do not know who or what I am.” His own persona was vague and his methods as an actor were unique: “I stare at my own image in the mirror every morning, waiting for the other fellow – the man I’m going to play – to emerge and stare back at me. I am waiting for the stranger to come into my life. When it happens, I have this flush of happiness.” He admitted he was a bore in real life: “To see me as a person on screen would be one of the dullest experiences you could ever wish to experience.”

He was born Richard Henry Sellers in 1925, into a well-to-do British acting family. His parents – both actors – worked in his grandmother’s acting company. Grandmother Welcome Mendoza was related to a famous mid-1800s Portuguese boxer, Daniel Mendoza. Throughout his life, Sellers revered Daniel Mendoza, and kept an engraving of him hanging in his office. Sellers was a fussed-over, spoiled child, “totally smothered in maternal affection” – in compensation, as his parents’ first child had died at birth. His problems with identity began in the cradle; although he was named “Richard Henry” his parents always called him “Peter,” the name of his stillborn brother (!). His father was critical and unsupportive of the boy, while his mother praised him excessively. His religious upbringing was very eclectic and confusing; Sellers’ father was Protestant, his mother was Jewish, and he was educated at St. Aloysius College, a Roman Catholic School. After entering Catholic school, he soon “discovered he was a Jew,” often made uncomfortable by being singled out for his heritage. He was a top student, and recalled a teacher once scolding the other boys with “The Jewish boy knows his catechism better than the rest of you!” He never achieved any sense of belonging much of anywhere. “Becoming part of some large group never does any good,” he observed years later. “Maybe that’s my problem with religion.” The result of all this was a somewhat unformed human being. “When I look at myself I see a person who strangely lacks what I consider the ingredients for a personality,” he remarked in 1969. He also carried a strong sense of self-loathing, claiming, “I writhe when I see myself on the screen. I’m such a dreadfully clumsy, hulking image. I say to myself, ‘Why doesn’t he get off? Why doesn’t he get off?’ I mean, I look like such an idiot. Some fat awkward thing dredged up from some third-rate drama company.”

Of course, this self-assessment was wrong. Onscreen, he was a great talent. In the 1960s, his performances were somewhat uneven, but often outstanding. As the decade wore on, and film comedies in general grew longer, more laboured and increasingly less sprightly, his quirky, inventive performances were often their brightest spark. He lost himself in a wide variety of vivid roles (including three in one movie, 1964’s Dr. Strangelove). As his Being There co-star Shirley MacLaine later observed, the man was a chameleon.

“You only know what happiness is once you’re married. But then it’s too late,” he once joked. Sellers did not have the makings of a family man, and he was not a good husband or father. His four marriages were stormy and he had very uneven, difficult relationships with his three children. Like his father before him, he was an impossible-to-please parent. “I have a name of being very difficult,” he explained. But, “I’m not difficult at all. I just cannot take mediocrity, I just cannot take it on any level.”

Sellers endured many rocky years, professionally and personally. He was frequently in poor health with a serious heart condition. In 1979, he was finally able to make a film he had been pitching for many years, the surreal comedy Being There. He received his only Oscar nomination for the part, as Best Actor, but did not win (though co-star Melvyn Douglas did, as Best Supporting Actor). The inscription “Life is a state of mind” is featured on a tombstone in the movie. All too soon, it was also inscribed on Sellers’ own tomb, after he died of a massive heart attack in 1980. He was 54. In his will, Sellers requested that the Glenn Miller song “In the Mood” be played at his funeral. This was a last quirky touch of Sellers humour, as he detested the piece.

Talented RICHARD ATTENBOROUGH has earned a slew of impressive honours in his long career: As the director and producer of Gandhi–voted Best Picture of 1982 – he won two Academy Awards. He has also won four BAFTA Awards and three Golden Globes. But, before he began producing and directing, Attenborough began as an actor. His film career began in 1942, when he played a deserting sailor in Noel Coward’s In Which We Serve. His breakout film role came playing a psychopathic young gangster in the hit Brighton Rock (1947), which brought him a great deal of attention. By 1949, he was the 6th most popular British actor at the box office. He played many roles on stage and screen before branching out into producing in the late 1950s. After he made his directorial debut with Oh! What Lovely War (1969), Attenborough stopped acting for many years as he kept busy directing and producing. He returned to acting in the 1990s with some big roles, playing the misguided mastermind of Jurassic Park (1993), and bearded Kris Kringle in the 1994 version of Miracle on 34th Street.

Attenborough has been married to actress Sheila Sim since 1945. The couple had three children, but lost their daughter Jane and granddaughter Lucy in the 2004 Boxing Day tsunami that devastated Indonesian coastlines. He has described that terrible Boxing Day as “the worst day in my life.” More than 100 items from his extensive collection of Picasso ceramics went on display at the New Walk Museum and Art Gallery in Leicester in 2007, as a memorial to his family members lost in the tsunami

Despite increasingly frail health, he kept busy. In 2008 he published an informal autobiography, Entirely Up to You, Darling. One of his two younger brothers is naturalist and broadcaster David Attenborough. In 2011, David said that Richard Attenborough is currently confined to a wheelchair but still enjoys a lively conversation. He added, however, that his brother “won’t be making any more films.”