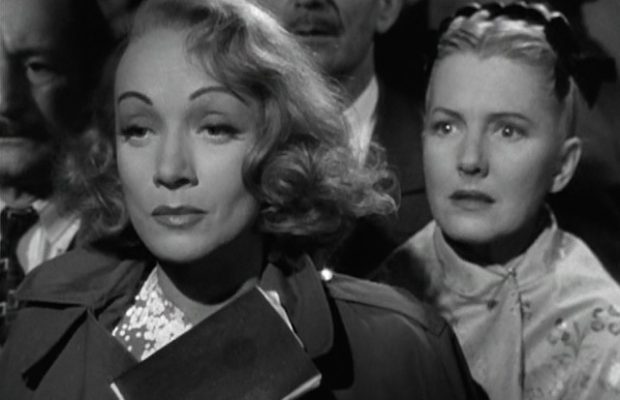 There will be an intermission after the Chaplin film, Shoulder Arms. 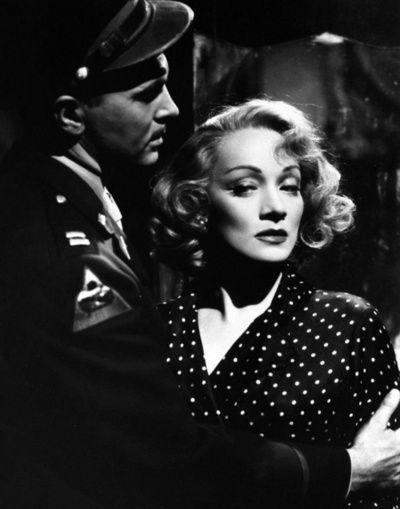 A Foreign Affair, the last collaboration of Billy Wilder and Charles Brackett, is a much more biting comedy than their earlier genial romp The Major and the Minor.  The care taken not to offend anybody in the latter has been forgotten in spades, and the team are merciless in their examination of aspects of postwar German guilt/self-pity and of presumed Allied moral superiority that doesn’t stand up to inspection.  “Fraternization” and the black-market are treated with a brash frankness hitherto unseen on the screen.  As so often with Wilder, various stern watchdogs over any possible affront to our sensibilities have accused him of “bad taste” in his bitterly comic treatment of events in a ruined and occupied Berlin.  Actually the movie is kept on a pretty high level by the brisk wit and skill of its makers, and not least by the stylish playing of Jean Arthur as a prim Congresswoman come to investigate the morale (and morals) of the American serviceman abroad, and of Marlene Dietrich as an ex-Nazi lady dividing her time between cabaret singing, black-marketeering and amorous dalliance with a U.S. officer (John Lund in his best form).

Among the chief pleasures of the show are Marlene singing about “The Ruins of Berlin” and Jean, gotten somewhat tipsy by friendly G.I.s, giving out with the “Iowa Corn Song” in a Berlin nitery.  Famous bits that stick in the memory include the Stars-and-Stripes-flying baby-carriage, and the episode of the “Operation Candy Bar” (the film’s original title).  The latter, with its memorable line “Don’t give it to her now!” is cruel if you like–cruelly true and cruelly funny, as is much else in the picture.

Herewith a few quotes about A Foreign Affair.

Wilder finds laughter in an unlikely place–the ruins of Berlin.  Shot during the winter of 1947-48, this satirical probe of just how many favours a GI could buy with a candy-bar in the ruins of Europe is a sharp piece of merchandise, sleek and impatient.  The U.S. Congress did not like A Foreign Affair, and the Defense Department found the film a shade embarrassing since it satirized regulations and officialdom in a smooth and sly manner.  The story…is about the ‘moral malaria’ allegedly infecting the 12,000 U.S. troops in Berlin and causing a Congressional Committee to investigate…Jean Arthur, looking suspiciously like Claire Booth Luce complete with braids and briefcase, comes to Berlin and has her spinster soul shocked by the amount of fraternizing between GIs and Herrenvolk.  Events leading to her discovery that you can’t pin an archangel’s stripes on a sergeant in charge of morale are among the most hilarious moments.  Another savage highlight is a scene in which she learns some embarrassing things about what the occupiers think of the folks back home…Arthur and Dietrich play their roles to the hilt, reaching their peak in a scene where Marlene, embodying all the worldly-wise sophistication of the war-weary European, sneeringly tells the Congresswoman what silly shrews American women are.  Lund takes full advantage of his part s the de-Nazification officer whose biological urges triumph over duty, and Wilder afford Miss Dietrich…scene-stealing moments by making her a night-club entertainer…in a cellar called The Lorelei.  The background was shot in Berlin by Wilder and Charles Lang, and A Foreign Affair came close to offering all things for all customers as a buoyant, refreshing diversion on the serious question of occupation of vanquished countries.

Accusations of bad taste…doubtless will be made against Brackett and Wilder because they have made a comedy out of occupation life in Berlin.  Such complaints can be ignored.  A Foreign Affair is very much the other side of the Berlin picture presented by [Rossellini’s] Germany Year Zero, and the best satiric comedy from Hollywood since [Preston Sturges’] Hail the Conquering Hero.  It owes its speed to hard, brilliant writing as much as to direction, and I recommend it as an example of how to get by the Hays Office with tongue-in-cheek.

Believing that the opposition should always be allowed its day in court, I shall close with these remarks by James Agee:

Some sharp, nasty, funny stuff at the expense of investigatory Americans; then…the picture indorses everything it has been kidding, and worse.  A good bit of it is in rotten taste, and the perfection of that is in Dietrich’s song ‘Black Market’.