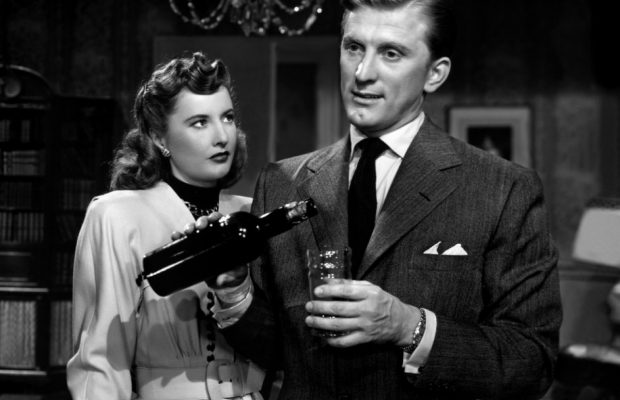 Toronto Film Society presented The Strange Love of Martha Ivers (1946) on Monday, July 17, 2017 in a double bill with The Mask of Fu Manchu as part of the Season 70 Summer Series, Programme 2. 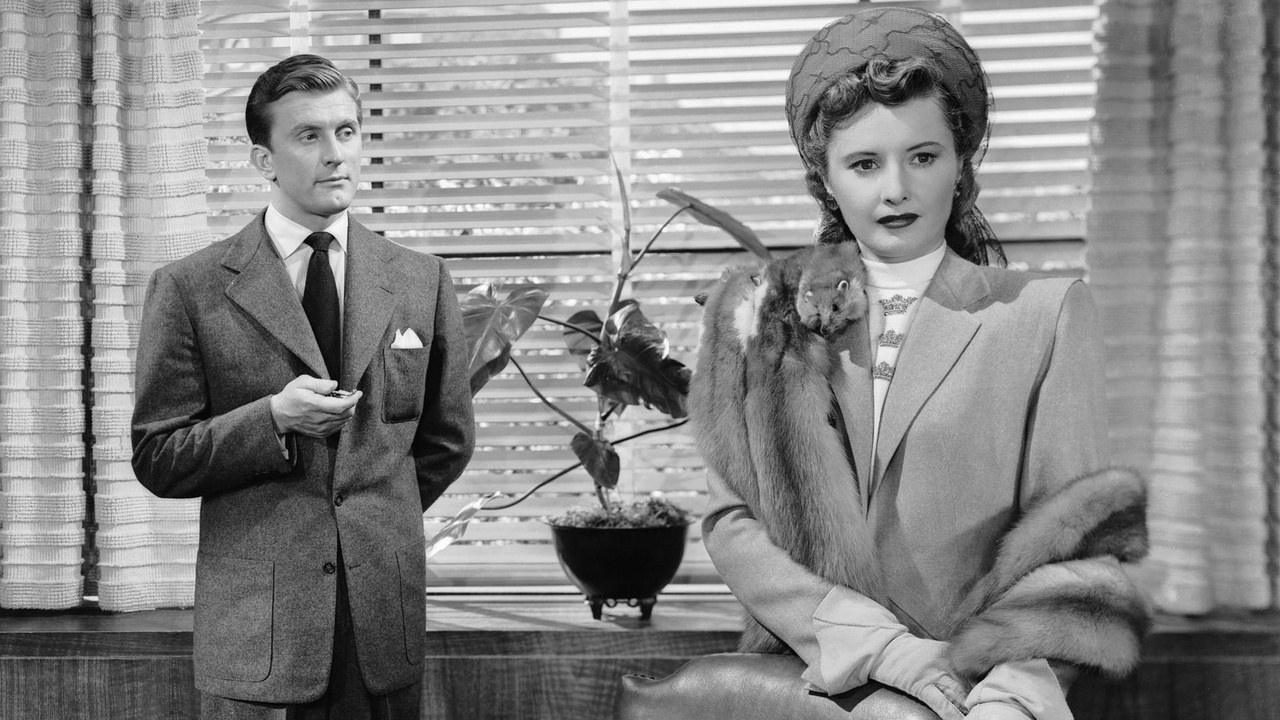 The New York Times’ Assessment of what Stanwyck brought to The Strange Love of Martha Ivers was correct.  Having broken the ice as a villainess with Phyllis Dietrichson in Double Indemnity, she no longer had fears about being a nasty dame on the screen.

Martha Ivers has everything going for it: a superior script, hard-hitting direction, a score by Miklos Rozsa and exciting camera work.  The script was written by director Lewis Milestone in collaboration with Robert Rossen, and Milestone explains: “I didn’t take screen credit for it, but then I seldom did.”

Film Daily called the picture “blue-ribbon” and said: “If the season discloses a drama related with greater intensity or one more intriguingly developed, it will be nothing less than a miracle.”  Important to this is the way the film probes its characters.  Their deed, motives and guts are laid bare inch by inch.

Like Double Indemnity, Martha Ivers shows a crime that would be perfect if people did not “come apart at the seams.”  However, the character of Martha is more complicated than that of Phyllis.  She does not come apart in a normal way; she is sick—her sense of values distorted by her childhood experience.

One of the reasons Martha Ivers is such a good film is because Lewis Milestone was inventive and his actors responsive.  Milestone talks of their work together and of the reactions of an always alert Stanwyck who “was very knowledgeable about all phases of film production.  She would come on a new set and carefully examine the placement of camera, lights, etc.  Then she would call the cameraman over and introduce him to the mysteries of her own favorite key light.  She astonished everybody with her knowledge of lighting and her technical know-how in general.”

During the rehearsals, they were faced with the problem of how to establish the fact that Van Heflin had become a professional gambler.  Build a casino?  Expensive!  And lengthy!  Then Milestone recalled a piece of business he had noticed at many of the casinos in Las Vegas.  Some of the dealers, superlatively skillful with their hands could take a coin, a dollar or half-dollar, insert it in the space between two knuckles, and deftly manipulate it to twist it end over end, over and over, to and fro across their knuckles.  He decided that this would be the perfect piece of business to help Van establish a believable character as a professional gambler.  When he suggested this to him, Milestone told him it wouldn’t be effective unless he practiced it a long time so he would be able to do it mechanically.  He would have to become so dexterous that he could concentrate on his dialogue without paying any attention to the business with the coin.  Van practiced for hours, and everybody was amazed at the skill he acquired.  He could deliver pages of dialogue while his hand performed the coin trick automatically.  Barbara watched this during rehearsal.  “Van,” she said, “that’s a wonderful piece of business, but if you do that during my important lines, I have a bit of business that will draw attention away from yours.”  She pulled her skirt up way above her knees.  “Any time you start twirling that coin, I’ll be fixing my garter.  So be sure you don’t do that when I have important lines to speak.”

The observant will notice that the travelling coin appears in only one of Stanwyck’s scenes—one in which Heflin is supposed to be antagonizing her.  It makes three bold journeys across his hand—and then gets the hell out of there! Plotline: An adolescent Martha Ivers tries to skip town with her rapscallion of a flame Sam Masterson, one stormy night, but is caught and returned to the clutches of the domineering aunt she hates. What happens next will be repressed for another seventeen or eighteen years, when Sam Masterson returns home only to discover just how strange a love Martha Ivers has for him, indeed.

Background Information: John Patrick’s story about a group of children who witness one of their party commit a murder, and how this guilty knowledge affects each of their lives in the future, was the germ Rossen developed into the “tortuous plot typical of film noir” evident in The Strange Love of Martha Ivers (Millichap 145). Producer Hal Wallis, greatly impressed with Milestone’s latest picture, A Walk in the Sun, was adamant that the two partner up for their next project, offering Milestone six properties with the right to film any one that piqued his interest. As Milestone had commissioned screenwriter Robert Rossen for A Walk in the Sun, it made perfect sense to bring him back for a Hal B. Wallis production, but the two of them couldn’t find anything of interest in the six properties that Wallis offered. Rossen, however, had had John Patrick’s story kicking around in his head for some time, and started writing a script springboarding off of it, leaving Wallis under the mistaken impression that one of his six properties was being filmed (Millichap 142).

Filming on The Strange Love of Martha Ivers wrapped two days before Kirk Douglas’s 29th birthday. He had made a meager Broadway début in 1941, and returned to the stage after Navy service during WWII, but Ivers was his first screen role. Douglas would go down as a giant in the history of Hollywood, and his work in Ivers is a premonition of such a feat; however, some might agree with Joseph Millichap. He felt that “Douglas’s strong personality–which we recall today from later films–somewhat submerges Walter’s weak identity”.

Indisputably admirable is Barbara Stanwyck as Martha Ivers. Martha was born into a family of class inequality when her mother, an Iverstown heiress, marries a working-class millhand at the family-run mill. It is explicitly stated that he died, though the fate of her mother is unclear. Nevertheless, Martha’s domineering aunt is determined to “wash the dirt and grime” out of her (in reference to her father), a sentiment that Martha abhors, instead identifying with the surname Smith. Ultimately, her escape from Iverstown fails, and she becomes the capitalistic magnate that she was destined to be, but her will to power exists in tandem with genuine love for Sam. Joseph Millichap and Alan Casty both point out that, while Stanwyck had already proved her worth as a femme fatal two years earlier, playing Phyllis Dietrichson in the seminal film-noir Double Indemnity, Martha Ivers is, in fact a much more difficult role. Dietrichson is “merely a scheming, put-upon housewife willing to do anything to get out from her trap and get the money”. Martha Ivers shares some of these affinities, but one also discerns a noble dimension in her character, or at least a desire for something noble. She “does love, would like to love, has always loved Sam–though fate has kept them apart until it is too late for her to realize that love in a way that is not destructive” or Strange.

Lizabeth Scott appears here in her second feature film, her first being the lead in You Came Along (1945). Scott was never quite able to shake off comparisons to Lauren Bacall, and it appears that these comparisons started as early as Ivers. Millichap points out that a contemporary critic accused Scott of working “from Lauren Bacall’s scrapbook” (Millichap 145). Producer Hal Wallis wasn’t overly intrusive to the extent of bullying Milestone during production, but he nevertheless “insisted on inserting a number of pointless close-ups of his latest starlet, Lizabeth Scott, in Milestone’s finished director’s print” that “stand out in the final version like so many sore thumbs, as the rest of the film is as faultless in its visual rhythms as everything Milestone ever did” (Millichap 144). TCM writes: “Director Lewis Milestone is quoted in an article in the Los Angeles Sun Mirror on December 8, 1946 as having said that he would never make another picture with producer Hal Wallis because Wallis wanted to reshoot scenes in this film for more close-ups of Lizabeth Scott; Milestone reportedly told Wallis to shoot them himself–which he did.” We can only assume that one of these reshoots was a sudsy Toni in the shower, looking a bit too glamourous for a paroled convict in the seedy hotel room of a stranger.

The only other personage who may have put an equally, or at least comparably, strong stamp of individuality onto the film was screenwriter Robert Rossen. “Compulsive, often perverse, psychoanalytic drives played out in a larger social world” were regular themes of Rossen’s, both as a screenwriter and a director. Martha Ivers is unique, in that she is a female version of the “corrupted gamblers, boxers and politicians” that “[wreak] havoc on the people and the institutions around [her]” (Millichap 144). Rossen had a knack for symbolizing these psychoanalytic drives of the characters on screen. For example, Martha’s burgeoning sexuality and the abuse it undergoes under the tyranny of her strict aunt is portrayed with some “rather obvious Freudian symbolism” (Millichap 146) in the scene where Martha’s pussycat is presumably bludgeoned to death. One should also note the long spiral staircase of the Ivers Mansion, which features prominently in two of the film’s most important sequences. It “realistically represents the opulence of the mansion, but also symbolically suggests the convolutions of its inhabitants’ twisted psyches” (Millichap 148). This is particularly relevant to Martha, who murders her aunt on the staircase, and attempts to murder her husband there, years later.

Of Interest: The film’s working titles were Love Lies Bleeding and Strange Love (TMC). Miklos Rozsa’s score features a theme for each main character, each of which intertwine and contrast in an almost perfect counterpoint to the visual images (Millichap 144).

One response to “The Strange Love of Martha Ivers (1946)”