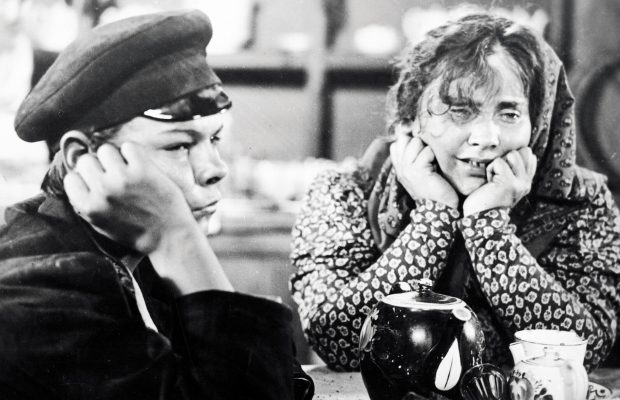 Toronto Film Society presented My Apprenticeship [Out in the World] (1939) on Monday, March 8, 1954 as part of the Season 6 Main Series, Programme 8. 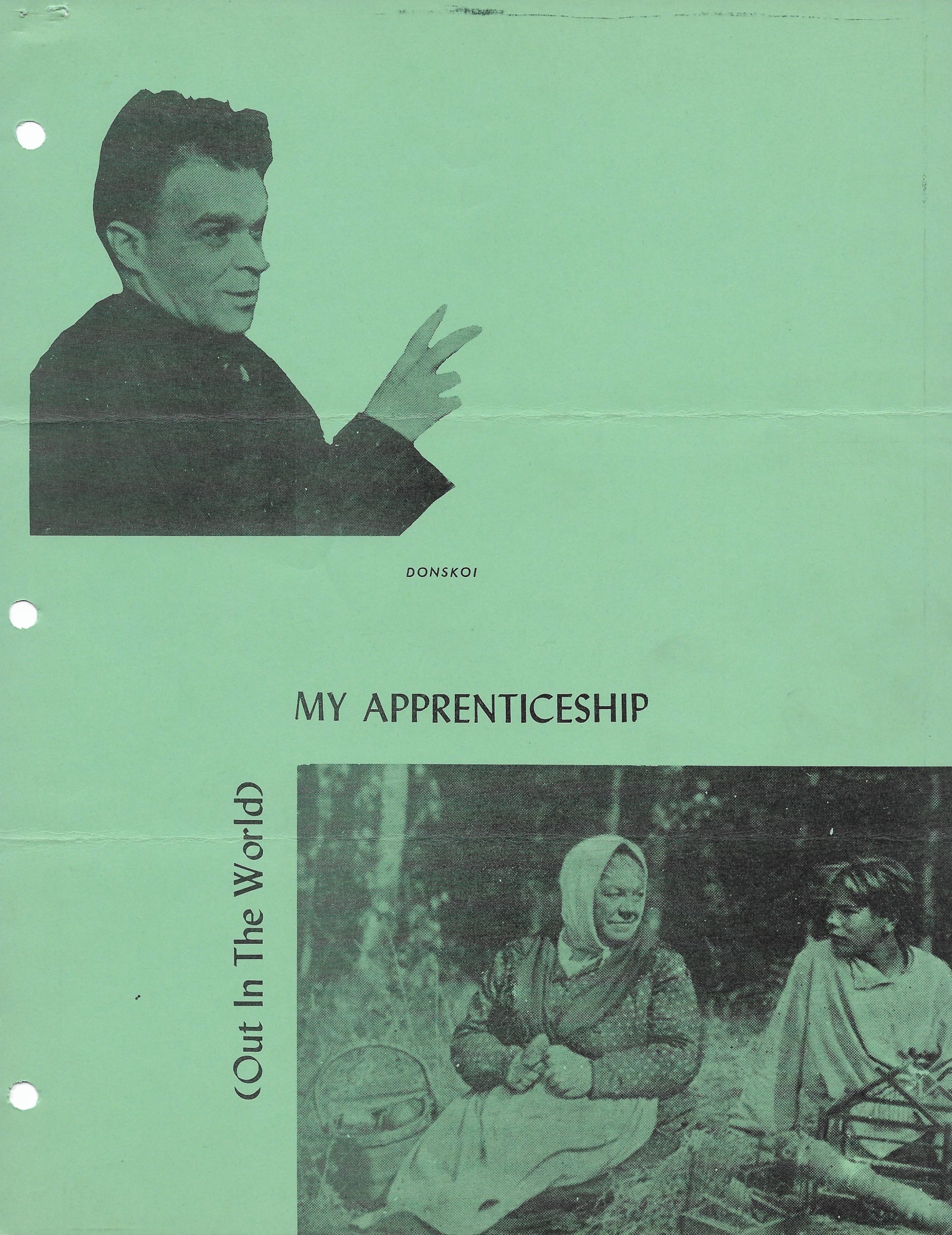 With this film, RICHARD MASSINGHAM is introduced to T.F.S.  English film societies have shown his trailers and longer films with obvious affection for a number of years.  This Season two sponsors of his films, the Gas Council and B.O.A.C. have released to Canada Facts and Fancies and They Travel by Air, at the request of societies.

Beginning as an amateur in 1935 (he was then a practicing doctor), Massingham gave up medicine and devoted himself to films.  During the war he founded Public Relationship films, a small production company that became famous for putting a sponsor’s message across in a fresh way.  He produced a number of one or two minute flashes for the government, exhorting the war-time British to stifle their sneezes, to lock their homes when going away, to cross the road properly and to take their baths in no more than five inches of water allowed by the Ministry of Fuel and Power regulations.  This massive man, with the huge puckered face, loved to act in his own films and “has built up a character full of the stupidities, grouses and warmer human qualities that the English people like to believe they possess.  The camera work, direction and editing of his films is carefully calculated to exaggerate every peccadillo and virtue”. – EDGAR ANSTEY

Early last year, Massingham died at the age of 56.

Three piano pieces by Debussy have been set to film by Jean Mitry, maker of Pacific 231 (shown in 1951-52 Season).  It starts in a gentle mood and culminates in a virtuoso study on reflections in the water of, firstly, landscapes and trees, and later, dazzling images of the sun caught by rippling surfaces.  In this final composition, extremely close photography of sea-water and occasional negative printing are used.  It may be interesting to compare the photography in Images with Steiner’s H20, although the aims of the film-makers were not the same. 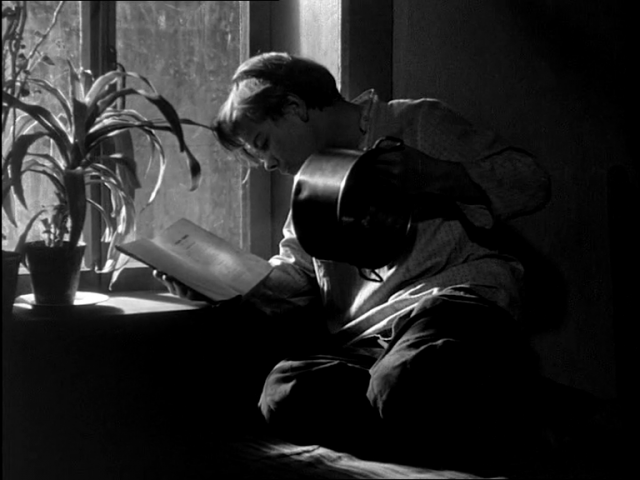 The work which reveals Donskoi as an individual master of his art is the trilogy based on the autobiographies of Maxim Gorki (1868-1936), the last of the great literary figures of the pre-revolutionary era.

‘All my previous work as a director’, Donskoi wrote, ‘was in preparation for the task of bringing Gorki’s autobiographies to the screen.’  The Childhood of Maxim Gorki (1938), My Apprenticeship or Out in the World (1939) and My Universities (1940) are faithful adaptations of Gorki’s autobiographies and are marked by qualities which distinguish Donskoi from other Soviet directors working today.  A generous and unforced humanity sets his films apart–a humanity which, in the case of the trilogy and Children of the Soviet Arctic (1941), is in no way obscured by propaganda or didacticism.

Like The Childhood (shown in the Society’s 1950-51 Season and repeated at the February Discussion Group Meeting), My Apprenticeship is marked by warm humanity, great integrity and rich atmosphere of the times.  It vividly pictures the efforts of the young Gorki, still a child, to earn his living at various jobs, and to understand the world he lives in and the people he encounters, after leaving his grandparents and little friends to go ‘out in the world’.  Again there are memorable characters and episodes full of content.  Donskoi’s style as a director is masterly, yet unobtrusive.  One has the feeling of observing actual life, yet combined with this realism is a remarkable poetic quality.

The trilogy was produced at the Children’s Film Studio, established in Mosco in 1936.  The subjects made there, though not necessarily about young people, were treated in such a way as to make them suitable for the young.  In working with children trained at the Studio, Donskoi considers the best results are obtained by making them understand what is at stake in a production as a whole.  Referring to twelve-year old Alexei Lyarsky, he wrote, ‘This boy became deeply, consciously engrossed in the job of depicting Maxim Gorki as a child.  It was remarkable how, the more he dwelt on the great writer, the more sensitive became his feelings, and his perception of nature sharper’.

NOTE:  Alexander Dovzhenko’s Earth, originally scheduled for this date will be offered at a special showing, April 5th.

Carol Reed:  The Man Between

Britain’s most brilliant maker of motion pictures, Carol Reed, has had an extraordinary and erratic career.  Strong human values marked his earlier films–one recalls the warm humanity and powerful social content of The Stars Look Down (still my personal favorite of his works) and the understanding humor and naturalism of his study of army recruits under training in The Way Ahead.  Also in The True Glory, the war documentary on which Reed collaborated, there was a genuine feeling for people as well as a brilliant editing style.  But since the war, style appears to have gained the upper hand and Reed has become known as a director of high-class thrillers marked by increasingly polished technique and less concern with human beings.  Yet Odd Man Out, The Fallen Idol and The Third Man still had notable emotional content, though in gradually lessening degree.  Then a couple of years ago Reed made a film of Conrad’s Outcast of the Islands that was technically a work of stunning perfection but almost inhumanly cold.  Now in his latest film The Man Between, even the style seems to be wearing a bit thin.  Not that there aren’t striking sequences (as when a sinister, slow-moving, snow-covered car stalks the heroine down a deserted Berlin street) but this is not consistent throughout the film.  And in spite of able acting by James Mason and some sporadic attempts at Third Man type characterization, the people and theme are Reed’s weakest to date.  Mind you, The Man Between is never less than competent and is head and shoulders above the routine movie melodrama.  But one wonders if the great Reed isn’t losing his touch–and if some serious self-examination wouldn’t be in order.

Another noted film-maker who is having style trouble is Max Ophuls, who seems to be getting carried away by his own moving camera.  This is very noticeable in The Loves of  Madame De…, featuring Danielle Darrieux, Charles Boyer and Vittorio De Sica.  Most of the way this is a graceful and amusing romantic period comedy somewhat along Lubitsch lines, though it goes rather incongruously tragic at the finish.  As in all Ophuls films the style is fluid and extremely accomplished, but now he’s overdoing it.  A scene in which the camera waltzes rhythmically about a ballroom with the principals is beautiful to look at–for the first five minutes.  This sort of thing reaches a climax when Ophuls deliberately has a boy sent repeatedly up and down stairs for a character’s hat, cane, etc. just so he can chase him back and forth with the camera.  Then in Le Plaisir, another Ophuls offering made up of three de Maupassant short stories, the same malaise is to be found in The Model episode in which a fairly complex relationship between two potentially very interesting people is obscured by the frantic restlessness of Max’s alarmingly mobile instrument.  In fact it requires intense concentration to catch the odd glimpse of Simone Simon or Daniel Gelin in an occasional moment of stillness or when they are not being shot from behind assorted furnishings and objects d’art.  Much more successful is The House of Madame Tellier in which one is allowed to watch Danielle Darrieux, Jean Gabin, Madeleine Renaud and the others at reasonable length.  This is very enjoyable and gratifyingly faithful to the original.

A right little, tight little thriller made by MGM in England is Terror on a Train with Glenn Ford and a British cast.  A neat yarn told with suspense, humor and atmosphere and without a waste shot (except for a perfunctory “love interest” which you fairly easily ignore).  Ted Tetzlaff’s best direction since The Window.

If you missed The Conquest of Everest at the Odeon-Hyland, by all means catch this remarkable camera record of a great feat at the Odeon-Fairlawn, Danforth or Humber, where it is playing through Thursday, March 5th.

“Excellent”—“Absolutely brilliant; by all odds the finest mystery film I have ever seen; the technique employed, the slow build up toward the climatic moment, made it for me an unforgettable experience; calculated, detailed analysis of characters, rather than rapid, superficial character sketching usually seen in American or British mysteries; nothing amiss with any of the characters, their sordidness did not appall the senses as did that frightful trash The Set-Up; this programme the best I have seen since starting with the Film Society”—“Had seen this before and welcomed the chance to see it again; still think it a masterpiece in unfolding of impact of letters on community and the disintegration and confusion that follows; built up tension and fine acting”—“Cast gave the impression of actually being the characters portrayed”.

Things Liked:  “The French air of intimacy and seemingly basic truth”—“The whole setting as well as the characters and performances of the actors”—“The building to a climax so very close to the end”.

Things Disliked:  “The film was overlong, could have had greater impact if shortened; so many characters tended to confuse the viewer; sound track very jarring and tinny”—“The print; the sound was ghastly”.

“Another fine example of Keaton’s comic art; hope other Keaton classics will be shown next season”—“First rate Keaton, with the classic chase”—“Amusing in spite of out-of-date technique”—“Probably the finest and funniest short subject in lighter vein shown this far by the T.F.S.; missed the Mickey programme but anything in that show would have had to be superb to be equal to Cops; chase scene the best yet; Keaton rivals Chaplin at his greatest”—“Dated more than some recent comic shorts”.

“Heartwarming, moving story, well acted; enjoyed this very much”—“Very moving documentary”—“True personification of people life in Wales”—“Contained great feeling which is lost in many documentaries”—“Unfair to show David between Le Corbeau and Cops; lacked the former’s penetrating analysis of character and the latter’s comic joviality; too long for a short, too short for a feature; neither fish, foul nor good red herring; given time for fuller development would have been successful; as it was episodes were disconnected and sometimes haphazard”.

“Late silhouettes disturbed our enjoyment; wonder if you could persuade thoughtless talkers to sit in the back rows; some of us like to hear the dialogue and are not amused by pretentious commentary”—“You expect people in commercial theatres to leave in the middle of a film, but there is absolutely no excuse for this conduct in a film society; would like to see a strong blast against these boobs in the next film notes”.

SHORTS ON THE JANUARY PROGRAMME:

On the whole, Proem, H20 and Absence were very well received, though several felt the latter unsuccessful and some criticized H20 as being overlong and pretentious.