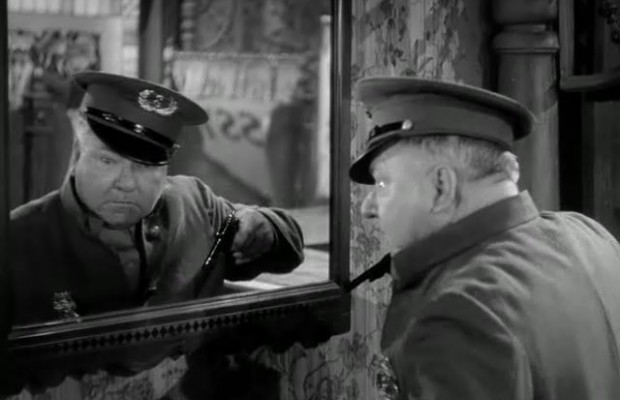 W.C. Fields was the most distinctive of the great movie comedians.  While Chaplin, Keaton, and Langdon relied heavily on pathos, sentimentality and pantomime, playing for audience sympathy, and Lloyd was a master of stunts and brilliant sight gags, usually as a likeable bumbler, Fields was his own man.

The character he created for the screen was spectacularly lacking in most of the elements then considered essential for a screen comedian.  Rather, Fields usually played men who were lazy,, devious, bungling, boozers, henpecked, blustery, and, of course, beset by rascally children and dogs, but more or less triumphant in the end.

Tonight’s film displays most of these traits, and thus can be said to be the quintessential Fields film.

As usual, the characters were given outrageous names by scriptwriter Fields: A. Pismo Clam, Mackley Q. Greene, and of course, old W.C. himself, Egbert Souse, (pronounced “Soo-say”, he insists).  The florid dialogue of Fields has made him one of J. Pinkerton Snoopington.

Throughout the endless series of sight gags, pratfalls, and hilarious dialogue, Fields moves with his customary aplomb.  Although many of the film’s characters and situations were clichés even in 1940, this is one of the main reasons why it was so enjoyable then and remains so today, for good comedy is timeless.