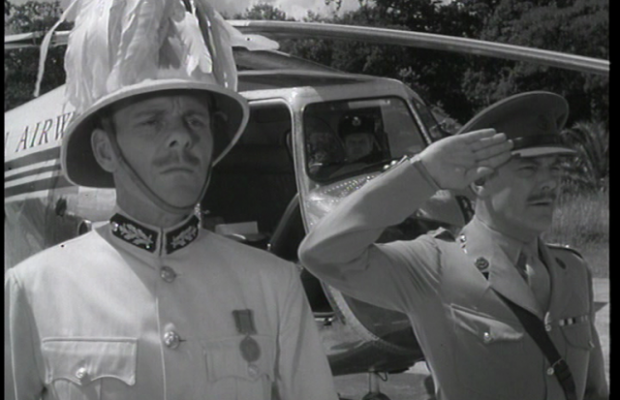 Toronto Film Society presented Carlton-Browne of the F.O. on Sunday, November 10, 2013 in a double bill with Appointment with Venus, as part of the Season 66 Sunday Afternoon Film Buff Series, Programme 2.

Fifty years ago, Britain granted the small island of Gaillardia the right of self-government and then quickly forgot about it.  So, when the Foreign Office receives an urgent request for aid

from a former employee reporting suspicious activities around the island, they are dumbfounded.  The F.O. sends out their “very finest”, Carlton-Browne, on a goodwill mission to re-establish communication and to look into what is going on around the island.  Meanwhile, a chance meeting between Loris, the new King of North Gaillardia, and the lovely Princess Ilyena could change everything.  In Carlton-Browne of the F.O. (also known as Man in a Cocked Hat) we are treated to an enjoyable, light-hearted comedy that is sure to please everyone.

TERRY-THOMAS (1911-1990) was born Thomas Terry Hoar Stevens, as the youngest of four of Ernest Frederick Stevens and his wife Ellen Elizabeth Stevens.  Ernest Stevens was a part-time amateur actor, which most likely sparked Terry’s interest in the art.  Leading a generally happy childhood, Thomas believed that his parents always secretly desired him to be a girl.  During his teen years, his parents’ marriage had failed, and both of them became alcoholics.  In an attempt to reconcile his parents as well as to entertain them, Thomas would perform ad hoc slapstick routines, telling jokes, singing and dancing around the house.  His attempts seldom worked, and his father became increasingly removed from family life.  His parents eventually divorced in the 1920s.

In 1933, a friend who had a job as a film extra talked Thomas into the idea of working in the industry.  Thomas made his uncredited film debut in The Private Life Of Henry VIII (1933),

which starred Charles Laughton in the title role.   Over the next eight years, Thomas appeared in 16 more films, as uncredited extras in all but one.  His first speaking role came in the 1935 Buddy Rogers comedy Once In A Million, where he shouted “A thousand!” during an auction scene.

Thomas met Ida Florence Patlansky, a South African dancer, in 1937, while she was auditioning in London for her flamenco dancing act.  Going by the stage name Pat Patlansky, she was eager to hire Thomas as a comedian rather than a fellow dancer, and so they established a cabaret double act billed as “Terri and Patlanski”.   Despite being immediately popular with audiences, the act only lasted three months.  Afterwards, the duo took on small engagements on the cabaret circuit.  The couple soon became romantically involved, and were married on the 3rd of February, 1938, at the Marylebone registery office.

Thomas and Patlanski signed up to the Entertainments National Service Association (ENSA) in 1939, in order to provide entertainment to the Bristish Armed Forces.  They were posted to France and appeared in a series of variety shows.  In April of 1942, Thomas received his call-up papers, so he left ENSA and reported to the Royal Corps of Signals training depot in Ossett, West Yorkshire.  After his basic training, Thomas was promoted to the rank of corporal and applied for a commission.  He was

turned down due to health issues and, as a result,  was downgraded from A1 to B1 at the start of 1943.  Thomas continued to appear in cabaret and variety shows while in the Army. On one occasion, he was seen by George Black, who had established the “Stars In Battledress” troupe, which consisted of entertainers currently serving in the forces.   Black invited Terry-Thomas to join, so in February 1942, he appeared in his first show.  Thomas, along with his fellow “Stars In Battledress” troupe, travelled throughout Britain and Europe on a tour that lasted several months.  Afterwards Thomas took compassionate leave until demobilization in April of 1946.

In July of 1946, Thomas joined the cast of the revue “Piccadilly Hayride”, and suddenly became the comic discovery of the year.  After a slew of nondescript roles, Thomas was cast as the effete, derisive Major Hitchcock in the first of a series of films produced by the Boulting brothers, Private’s Progress (1956).  In the next several years, he took on several similar roles, taking a satirical look at man British institutions.   Following his overbearing Bertrand Welch in Lucky Jim (1957), he starred as the titular Carlton-Browne of the F.O. (1959), a satire paralleling the Suez Affair, which turned out to be one of his best roles. Terry played an inept, blundering diplomat appointed as “special ambassador” to sort out the political quagmire of an obscure former colony that had been overrun by foreign agents and was on the verge of an uprising. For this assignment, his character has little more to draw upon than his

knowledge of Debrett’s Peerage and Sporting Life. This film established the dandified “jolly good show”-type, Terry-Thomas screen personae once and for all.

In the late 1960s, Terry-Thomas settled on the island of Ibiza with his twenty-six-year-old second wife. However, by 1984, his prior extravagant lifestyle and the exorbitant costs associated with the treatment of Parkinson’s disease, with which he had been diagnosed in 1971, forced the couple to sell the villa and move back to a sparse flat in Britain. Almost destitute, his remaining days were made easier by his numerous friends in show business who managed to raise 51,000 pounds for him at a London benefit. Terry-Thomas died at a high care nursing home in Godalming, Surrey, in January 1990, at the age of 78.

LUCIANA PAOLOUZZI (1937-) started her career in the film Three Coins In The Fountain (1954), in an uncredited walk-on part.  She then went on to appear in many more movies, most of which were filmed in her native Italy.  Paolouzzi is best known for her role opposite Sean Connery as the sultry villainess, Fiona Volpe, in  Thunderball (1965).  Having originally auditioned for the lead Bond girl, Paolouzzi was crestfallen to learn that she had not gotten the part.  The part of Dominetta “Domino” Palazzi was instead given to Claudine Auger, changing the nationality of the character from Italian to French and renaming her Dominique Derval.  Paolouzzi later rejoiced when given the part of Volpe, which she stated was “more fun to play”.  Paolouzzi later claimed that being a Bond girl was a double-edged sword.  In the documentary Bond Girls Are Forever, Paluzzi expressed amazement at the level of fame, publicity, and recognition she received from Thunderball; but as a result of being in such an outlandish film, she felt she was taken less seriously as an actress upon returning to the Italian film industry.