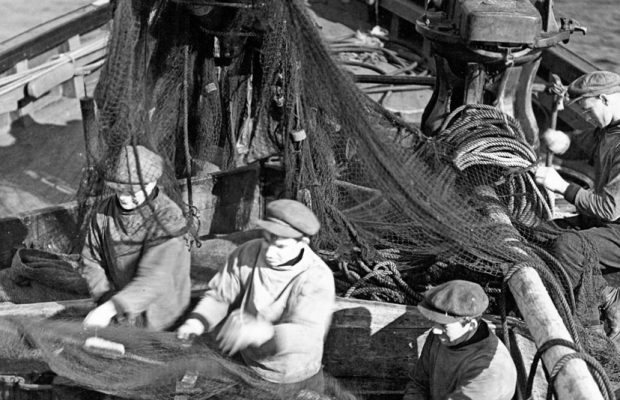 THE COMEDIES OF MACK SENNETT

Mack Sennett, the father of American screen comedy (and a Canadian, by the way) made two kinds; parody laced with slapstick, and plain slapstick.  The parodies were the unceremonious burial of a century of hamming–nobody who has missed Ben Turpin kidding Erich von Stroheim in Three Foolish Weeks or Valentino in The Shriek of Araby can imagine how rough parody can get and still remain subtle and roaringly funny.  The plain slapstick, at its best, was even better: a profusion of hearty young women in disconcerting bathing suits, frisking around with insanely incompetent policemen and equally certifiable male civilians with museum-piece moustaches.  All these people zipped and caromed about the pristine world of the screen as jazzily as a convention of water bugs.  Words can hardly suggest how energetically they collided and bounced apart, meeting in full gallop around the corner of a house; how hard and often they fell on their backsides; or with what fantastically adroit clumsiness they got themselves fouled up in folding ladders, garden hoses, tethered animals and each other’s headlong cross-purposes.  The gestures were ferociously emphatic; not a line or motion of the body was wasted or inarticulate.

According to Sennett, he discovered the sped tempo proper to screen comedy when a green cameraman cranked too slow.  Realizing the tremendous power of mere motion to exhilarate, he gave inanimate objects a mischievous life of their own, broke every law of nature the tricked camera would serve him for, and made the screen dance like a witches’ Sabbath.  The thing one is surest of all to remember is how toward the end of nearly every Sennett comedy, a chase (called the “rally”) built up such a majestic trajectory of pure anarchic motion that bathing girls, cops, comics, dogs, cats, babies, automobiles, locomotives, innocent bystanders, sometimes what seemed like a whole city, an entire civilization, were hauled along head over heels in the wake of that energy like dry leaves  following an express train.  “Nice” people, who shunned all movies in the early days, condemned the Sennett comedies as vulgar and naive.  Millions of less pretentious folk loved their sincerity and sweetness, their wild-animal innocence and glorious vitality.

The silent-comedy studio was about the best training school the movies have ever known, and the Sennett studio was as fecund of talent as they came.  All the major comedians–Chaplin, Keaton, Langdon, Lloyd–worked there at least briefly, and so did some of the major stars of the 20’s and since–Gloria Swanson, Phyllis Haver, Marie Prevost, Wallace Beery, Marie Dressler and Carole Lombard.

Despite his influence on Chaplin and on Rene Clair, Sennett’s talent has always been underestimated.  Slapstick today is decadent and people remember it, erroneously, as a lot of meaningless pie-throwing and rushing about.  It was, instead, an ordered madness, a high form of cinematic play improvised with an instinctive grasp of visual rhythm and of tempo.  Akin to carnival and to the circus, especially to the parade of the circus clowns, slapstick under Sennett was great not merely on technical grounds, but because it was inspired by a profound, wry knowledge of human nature and a most delicate observation of life.

Paul Rotha in The Film  Till Now said of this film (in 1929): “Without hesitation, there is one production that is pre-eminent in the British cinema, Grierson’s film of the herring fleet.  As far as I am aware, Drifters is the only film produced in this country that reveals any real evidence of construction, montage of material, or sens of cinema.  (Surely Rotha should have excepted some early work of Hitchcock and Anthony Asquith – George G. Patterson)  Admittedly, Grierson was influenced in his work by the rhythmic construction of Eisenstein’s Potemkin–but he contrived to build a film of great strength and beauty in Drifters.  Like Epstein’s Finis Terrae and Ford’s Iron Horse, the theme of Drifters was pure in flimic texture.  The ships that sailed out at night, the casting of the drifting nets, and the climactic race home to give their haul t the markets of the nation, were splendid film material.  The film was filled with the beauty of labor and the sense of ships.  It lacked, possibly, a universal idea of the sea by its concentration on detail, but it was so far in advance of normal British productions that to write unfavorably of it would be ungenerous.”

Says Roger Manvell in Experiment in the Film: “Drifters was in many ways an unpretentious and indeed a humble film.  It is still a little surprising to remember the insight which led to its immediate and widespread acceptance as a new major work of the cinema.  In the opinion of many of those present at the original performance, the excitement it aroused overshadowed the reception of Eisenstein’s Potemkin which was being shown for the first time in England.  The Press devoted much space to Drifters and it appeared that a strong sea-breeze had blown through the faintly musty halls of British screen experiment.  Drifters arrested the current tendency towards a non-functional artiness in theme and style.  it rejected all sentimental or directly propagandist interpretations of its simple theme.  The film grasped an ordinary phenomenon of current life and analyzed it, not with the object of making it appear extraordinary, but with the idea of integrating the dramatic elements of its very ordinariness.  Each carefully composed scene had been tested for its fitness for the final purpose.  If the camera angle was unusual, this was the means only to a clearly previsaged end achieved eventually on the editing bench.  For the total drama of the theme was realized by the editing of sequences in a manner more akin to the composition of music than to the editing conventions previously accepted.  Grierson had laid the foundations of a film-making organization which was to provide not only the Government with its Post Office Film Unit, its Crown Film Unit and its Ministry of Information Films Division, but the country as a whole with a new and flexible piece of film-making machinery.  From it too were to grow the National Film Board of Canada, as well as documentary groups in other countries founded or influenced by the original school.”

From the British Film Instituted’s 40 Years of Film History: “As the only film which Grierson himself ever directed, and as the forerunner of the (famed British documentary movement), Drifters has gained the reputation almost of a myth.  Grierson, by training a sociologist, admitted his interest in films was primarily that of the educationist.  The aesthetics of the film medium were relatively unimportant to him, and his main aim in Drifters and later productions was, in the widest sense, to instruct.  Thus Drifters showed to cinema audiences, unlike any previous film, ‘the man behind the job’.”