Toronto Film Society presented A Night at the Opera (1935) on Thursday, August 10, 1967 as part of the Season 19 Summer Series “Thirties to Forties”, Programme 3.

Stan Laurel (before joining up with Hardy) was famous for his satires of current “blockbusters”–Mud and Sand, Under Two Jags, etc.  This one, satirizing The Spoilers, of course, is said to be one of the better ones.  In particular it was prompted by the tremendously popular 1923 movie version of Rex Beach’s book (directed by Lambert Hillyer).  – The Soilers placed 21st in the international critics’ poll.

On our opening show you saw one of Langdon’s first movies–All Night Long.  This one is the last movie he made for Mack Sennett.  At three reels, it is just under feature length and his first feature, The Strong Man, was to be released by First National just three months later.  Incidentally, The Strong Man, like several of his features, was directed by Frank Capra, who co-authored the script for Soldier Man.  Its other co-author, Arthur Ripley, was also a well-known director of comedies.

Directed by and starring Larry Semon.

This one finds Larry Semon doing a female impersonation and appearing as a stunt man mixed up with a radio-controlled ‘plane and the like.

Bugs plays havoc with the world of classical music.

Place 3rd of the Twelve Best Comedy Films in the international critics’ poll. 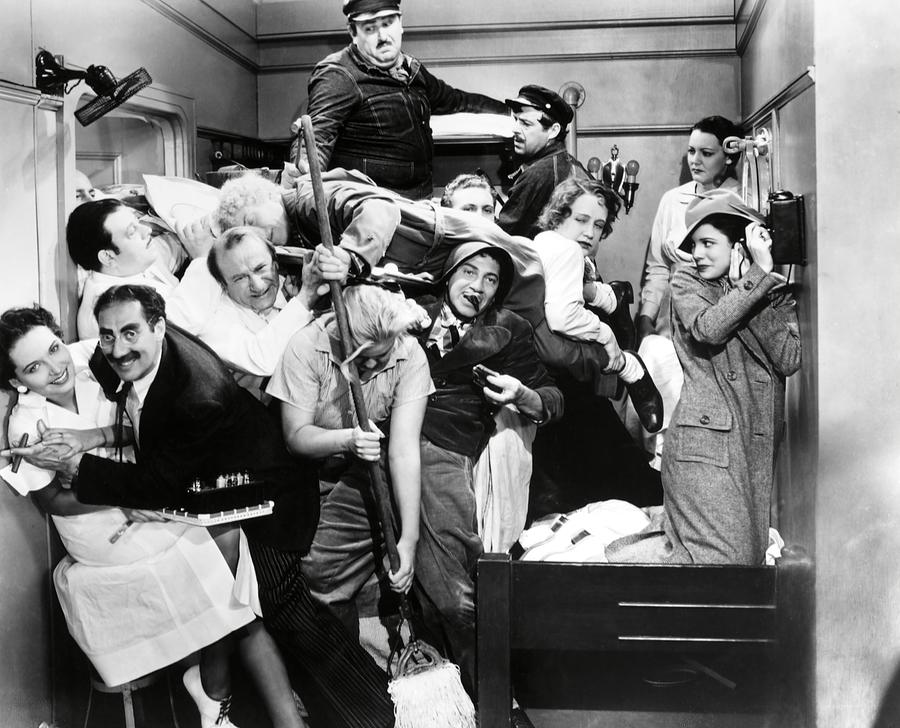 The man most crucially responsible for the success of this happy classic was Irving Thalberg, boy wonder executive at M.G.M.  When the Marxes (three of them) came to Metro, they had not made a film for two years.  The trade remembered that their last comedy, the outrageous Duck Soup, had been “caviar to the general”.  Thalberg had every care taken with their new project.  The team went out on the vaudeville circuits with a stage show, “A Night at the Opera”, allowing them to pre-test material for popular approval.  George S. Kaufman, the Broadway dramatist with a mind full of acid drops, collaborated on the script and came up with a folio of superbly insulting lines for Groucho.  (“Ah, Gottlieb”, he exclaims to bearded Sig Rumann, “still beating about the bush?”.)

Thalberg went further.  He reshaped the Marxes’ image, softened and popularised their anarchistic souls.  In A Night at the Opera, Groucho gets kicked downstairs and Harpo is whipped by an operatic oaf of a tenor.  They become, almost, “little people”, helping “regular folks”, the struggling young singers, Allan Jones and Kitty Carlisle.  Many critics and film buffs will NEVER forgive Thalberg for this but my own opinion is that–he had a point.  This is, at the least, one of their funniest films and decidedly their most ingratiating.

Notable also, under Thalberg’s guidance, are the movie’s production values, particularly in the climactic operatic mayhem (inspired by René Clair’s Le Million?) and the big number, “Cosi Cosa”.  Wisely retained is that pillar of womanhood, Margaret Dumont, an ideal target of gibes at cultural snobbery.  “The immortal strains of Verdi came back to you tonight–and Mrs. Claypool’s cheques will come back to us in the morning.”

During the shooting of A Day at the Races Thalberg died.  Thereafter, for the Marxes at Metro, the bloom was off the rose.