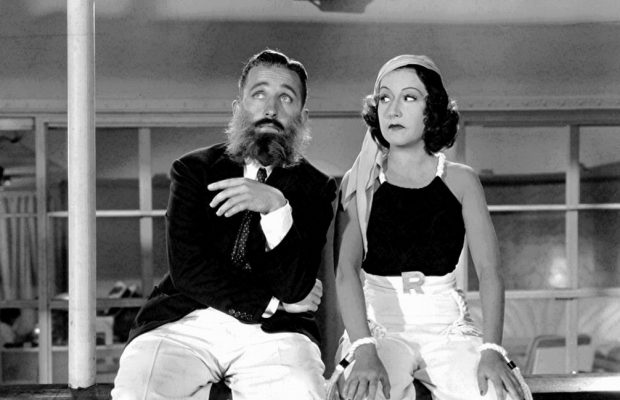 Toronto Film Society presented Anything Goes [Tops is the Limit] (1936) on Sunday, December 10, 1989 in a double bill with Blue Skies as part of the Season 42 Sunday Afternoon Film Buffs Series “A”, Programme 4. 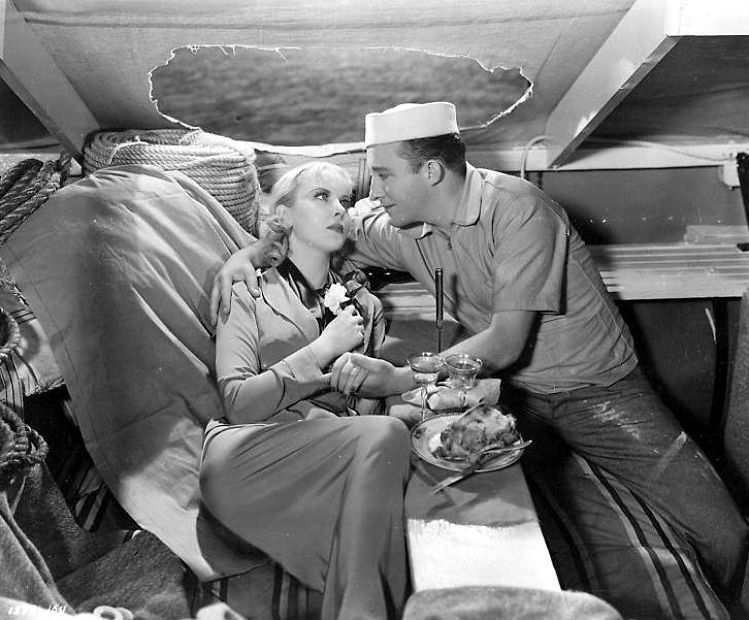 Anything Goes originally appeared on Broadway in 1934, but was transferred to the screen in 1936.  Ethel Merman is the only member of the original cast appearing in the screen version, together with four of the original Cole Porter songs, including “I Get a Kick Out of You”, and “You’re the Top”.  Bing Crosby replaced William Gaxton who appeared in the Broadway show, and teams up with Ms. Merman on “You’re the Top”.

The film is somewhat topical as it takes place on a Transatlantic liner, and features a former Evangelist, as well as a Public Enemy masquerading as the Rev. Dr. Moon.  Any resemblance between the fictional and living characters is purely coincidental.

Variety felt that “Cole Porter’s lyrics, which were the essence and chief asset of the original stage “Anything Goes”, have been sacrificed for and replaced by plot motion in this Paramount film adaptation….  Minus the lyrical distinction, the film had to make up for it in its own way, and it managed to o so sufficiently to qualify as an entertaining musical of generally good box office potentialities.  The cast, headed by Bing Crosby, is alone a guarantee of attention.”

The casting of Charlie Ruggles, normally so reliable, was seen at the time as a mistake.  The New York Times, in pointing out the differences between the Broadway musical and the film adaptation, commented on the premiere: “…instead of an exuberant pop and a merry fizz, there was merely a gentle sigh whose burden was: “Where, O where is Victor Moore?”…  Anything Goes without Mr. Moore is comparable to “You’re the Top” without Cole Porter’s lyrics.  It gets by, but without distinction.”

The remake of this film, also by Paramount some twenty years later, again starred Bing Crosby (with Jeanmaire, Mitzi Gaynor, Donald O’Connor and Phil Harris), and kept five of the original Cole Porter songs, although, as The Encyclopedia of the Musical Film points out, “lyricist Ted Fetter was called in to make uncredited alterations to “You’re the Top” and “Anything Goes”.  Also added to the remade version was the well-known song “It’s De-Lovely” from another Cole Porter show.

Despite the changes from the Broadway version to the film version of 1936, the music of Cole Porter remains today as fresh, sophisticated and original as the day it was written, and will be remembered long after the story of the film itself.