LOBBY FILM from 7.45 to 8.10 p.m.  The History of the Silent Film in America, a filmstrip by Roger Manvell

Produced by Roger Leenhardt, for the Cannes Film Festival

The film traces the origin of the motion picture from the early scientific study of movement by the French physician, Marey to the inventions of Edison and Lumière.  Examples of Edison’s films made as early as 1888 and of Lumière’s films about everyday events are shown.  It should be remembered that the early history of the motion picture involved other important contributors from England, America, France and Germany of whom mention is not made.

Directed and photographed by Arne Sucksdorff

Sucksdorff is one of the most talented makers of short films anywhere.  As a craftsman he is supreme, having already at the age of 34 taught himself more than many directors learn in a lifetime.  “The directness, freshness and poetry of his style make his films comprehensible and immediately appreciated wherever they are shown.”  Unfortunately his famous animal films have not been available in Toronto, but we have seen his superb Rhythm of a City.  Wind From the West, about the return of the Lapps to the mountains in spring, told through the eyes of a child, is an early film with an idyllic and picturesque quality absent from his later films.

This is an account of the making of a fractionating column and its subsequent shipment from the U.K. to Venezuela in one piece–length 72 feet, diameter 10 feet, weight 108 tons.  The film is accomplished with clarity and moves at a leisurely pace allowing time for surprising little sequences which are extremely refreshing.

Winner of the First Award in the Amateur Class of the Canadian Film Awards last year, this film is an experiment by twenty-year old Claude Jutras of the University of Montreal Cine-Club.  It was recently presented at the Festival du Film de Demain in Antibes and at the Festival International du Film Amateur in Cannes.

Its maker says, “It owes its inception to the day when I heard a recording of ‘Perpetual Motion’ by Novacek, played at a slow tempo.  This recording incidently furnishes the sound background for the film.  The result of listening to the music was a flow of images linked around an ill-defined psychological situation of love and jealousy.  The psychological is relentless and unchanging throughout the film.  This is explicitly emphasized by the film’s similar ending and beginning.  …

It was never a question of simply illustrating this basic drama, but rather of considering it in its essence.   …Thus the drama is despoiled of space and time.  …The film as a whole may be considered as a symbol, but we must be careful not to search for individual symbols amongst details which compose it.  C’est un film symbolique et non pas symboliste.  It was necessary that images should not only be plastic but in constant evolution, thus creating an illusion of motion and recalling the notion of rhythm.

It is apparent that there are essential differences between the gist and the form, …for Movement Perpétuel is a vision in motion of a static situation.  It is finally in this duality between movement and immobility that the real drama resides.”

NOTE:  If the running time of Broken Blossoms is found to be excessive, the short Tall Order will be moved to last spot and run after the feature to allow those who must leave early to do so. 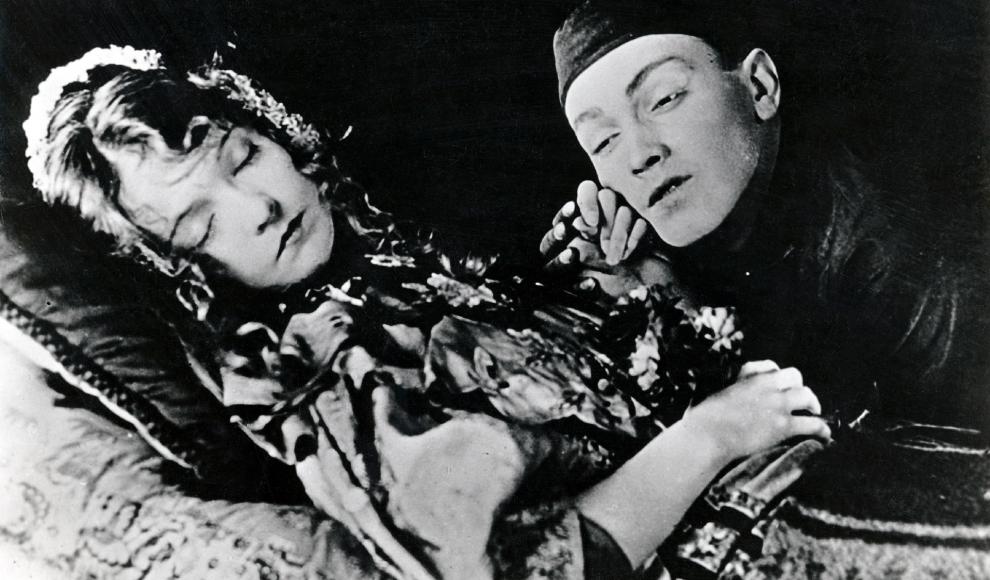 By 1919 the motion picture was learning fast how to deal freely with ideas and feelings as well as with deeds and here Broken Blossoms, despite its almost purely theatrical form, played an important part by its scaling down of dramatic action and its intensification of intimate emotion….  In the development of the American film, Broken Blossoms marked a distinct advance.

Griffith’s last outstanding cinematic achievement, it was his most successful and acclaimed effort since The Birth of a Nation and Intolerance.  A distinguished if not a great work, the film contained a number of features that were deliberately chosen for their publicity value and revealed Griffith’s growing esteem of showmanship: the racial issue, the unusual locale, gauzes and soft-focus effects and the novelty of tinted sequences and beams of pastel-coloured lights, thrown from a projector while the picture was in progress to endow the sequences with additional emotional overtones.  …

Based on Thomas Burke’s Limehouse Nights and in particular on The Chink and the Child, Broken Blossoms is a poignant romantic tragedy of the love and care of a Chinaman for a mistreated girl.  …Despite its lapses into sentimentality, the whole has a reality and plausibility that represented Griffith at his best.  …The impressive atmosphere is equaled by the characterizations.  …There are many splendid moments in the film that suggest Griffith’s faculties in their prime.  …The fine execution and cutting of these scenes were supported by a sustained use of the camera to evoke moods, feelings, pictorial qualities.  The “soft focus” suited the tenderness of the tale.

2nd JOINT DISCUSSION GROUP MEETING – Tuesday, January 23rd
Members of Toronto Film Society and University of Toronto Film Society will have the opportunity to discuss the work of D.W. Griffith when a panel of critics and laymen will consider Griffith from various aspects and invite participation of the members.  Details about the place of meeting and panel will be announced at the Exhibition Meeting, January 15th.

CHANGES OF ADDRESS
Will those members who have moved since joining the Society please give their changes of address to the Secretary in the lobby or forward to 233 Grenadier Road.  A number of programme notes have been returned.

PROGRAMMING AND RESEARCH COMMITTEE
Members who would like to participate in this branch of the Society’s affairs and who have not already indicated their interest, please forward names and phone numbers.  Notices concerning a meeting in the last week of January will be mailed as early as possible.

Favorable comments: “A rare treat – silent comedy as close to its best, Chaplin excepted.  Where today is the brisk-paced and unflagging invention?; very refreshing – too bad 1950 comedies don’t try it; one of the funniest screen experiences I have had the pleasure to see; excellent society material.”

Unfavorable comments: “Only unfavorable comment is that classic comedies such as these aren’t shown more widely; these 2 comedies interesting more because of the things they lacked – the pathos that is behind all great comedy.”

Dream of a Rarebit Fiend – “very cleverly done, interesting historical novelty; not in the same class with Méliès who possesses real charm.”

Lord Siva Danced – “best I’ve seen of its kind, visually and aurally well handled; all societies should show this.”

Inki and the Minah Bird (35mm) – “unusual and quite funny; unforgettable; excellent sense of design and use of soft colours.”

Lobby Film – Chantons Noel – “repelled me.  The life of Christ and the worship of Gods are sacred, not subjects for rexperimentation along the lines of comic strips and Mickey Mouse.  You may have disliked it as much as I did.”

“I read my copy of Members’ Evaluations and Talking Back to the Members with avidity.  But I take belligerent exception to the suggestion: ‘Please do away with announcements,’ which always are of importance to the audience, and to our advantage.  It is so much warmer for the announcer to appear in our midst.  There is a satisfaction in being able to see someone to whom you are indebted.  Whoever made that suggestion must be more at home in the commercial theatre.”

“A silent film is a silent film.  Cut the music, especially the dreadful piano tonight that spoiled the whole film.”

“There never was such a thing as a–SILENT FILM!  Back in the early thirties a cartoon in Punch showed a dear old English grandmother in a lace cap (but woefully ignorant of course) being cross-examined by her grandchildren (confidently aware of all wisdom in the universes.)  They asked her, “Well Granny! and how did you enjoy the new talking pictures?” and she replied, “Oh they were very nice but I much preferred the old unspeakable ones.”

Only Maya Deren and a few other experimentalists including myself ever made films specifically designed to be run in silence.  ALL other films were meant to be accompanied by sound of some sort from the mechanical piano of the early 5¢ theatres to gigantic pipe organs and the 110 piece orchestra which Erno Rapee conducted in S.L. Rothafel’s theatre.  Warner Brothers’ Vitaphone with its sound on discs and Will Fox’s Movietone with sound actually on the film introduced TALKING to the motion pictures but nots sound!  The fallacious and sloppy reasoning which contracts “sound on film” to “sound film” and then goes on to infer that previous films were hence SILENT is deplorable, particularly so in film society members.  I prefer the designation GARRULOUS FILMS and UNSPEAKABLE ONES.  The Ottawa Film Society runs early films without sound of any sort and I am told that some members of the Toronto Film Society propose to do the same.  May I quote from my grandson and ask, “How stupid can you get?” – Angus Hanson