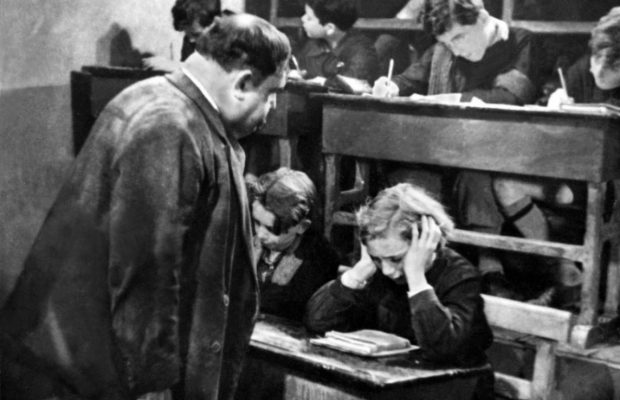 Photographed at actual speed, the film reveals the swiftness and grace of Professor Chang Shu-Chi’s technique as he works on flower and bird sketches.

It is important to remember how much of a pioneer John Grierson was and how much he has influenced the lives of English-speaking peoples.  There have been many landmarks in his career to date.  Three are somewhat similar–his organizing of the E.M.B. and G.P.O.  Film Units in England and the N.F.B. in Canada.  The film, Night Mail is another important landmark, for it has influenced almost all film-making since its production.

In the period before Night Mail was made his colleagues were exploring the form which Grierson called “documentary.”  The G.P.O. Film Unit had just acquired its own sound equipment and Grierson brought Cavalcanti from France to do research in the use of sound.  “Cavalcanti quickly built up a great respect for the role of the sound-film editor, a man working in a most complex counter-point of dialogue, commentary, music and natural sound.  The actual sounds of day-to-day life were given their true importance, not only to create atmosphere but as a means of evoking what I can only describe as an extra dimension of emotion.”  (Edgar Anstey)

Night Mail which reveals the human meaning behind the nightly journey of the Postal Special from London to Glasgow is famous for its imaginative use of sound.  This, combined with effective visual cutting, makes most modern films appear by contrast polite in the extreme.

With the excepetion of a few notable productions by amateurs, Canadian films have only recently begun to interest themselves in aspects of Canadian history.  This charming short employing an unusual animation technique, fetching colour design and a whimsical approach is much more entertaining, also more informative and artistic, than some more colemn offerings.  The theme is the settlement of Canada by various national groups from earliest days and their assimilation into national unity.

If you regard all experiment as affectation and all that bewilders you as a calculated personal affront, and if you ask of art chiefly that it be easy to take, you are advised not to waste your time seeing Jean Vigo’s Zéro de Conduite and L’Atalante.  …If on the other hand, you are not sent into either ecstasy or catalepsy by the mere mention of avant-gardism, if your eye is already sufficiently open so that you don’t fiercely resent an artist who tries to open it somewhat wider, I very much hope that you will see these films.  (James Agee)

Vigo had a peculiar kind of obsession for liberty and against authority and felt it in terms of the children and masters in a school.  In essence Zéro de Conduite is a poem of the human struggle for liberty; it moves freely and surely in its own unprecedented world from start to finish with a total absence of well-constructed diagnosis and prescription.

The film has a theme rather than a story; the theme is the revolt of a number of boys against the repression of narrow discipline and evil living conditions in a little French boarding school.  The plan for the revolt passes through various stages, or episodes, culminating in the major revolt at night in the dormitory, and in the revolt on a Speech Day celebration attended by local officials dressed like ambassadors and firemen.

“The boys are seen as they see each other; the audience is one of them.  The teachers, seen as the boys see them or hope to see them, are masterpieces of caricature, mainly ferocious.  The exaggeration, wild and comical, is that of the child’s viewpoint.  (Many of us can remember uncomplimentary drawings of our own teachers on the blackboard.)  The sympathetic teacher who leads them to revolt is a sort of lay Chaplin; another, an inspired epitome of the snoop suggests a tiptoeing lobster in an undertaker’s suit; the headmaster is a pompous, murderous, shrieking midget, (his top hat, the symbol of his authority).

On one seeing, the film is quite bewildering, even if you understand its main device, as I was slow to do; but if you know the device, and accept it, the bewilderment itself becomes essential to the poem, and to your pleasure in it.  As I see it, the trick is, simply, that Vigo gets deeper inside his characters than most people have tried to on film, is not worried about transitions between objective, subjective, fantastic and subconscious reality, and mixes as many styles and camera tricks, as abruptly as he sees fit–always using the right style at the right moment, and always using it with force, charm and originality.”

(Quotation from James Agee in The Nation, July 1947)

JEAN VIGO died in 1934 before he was 30, leaving only a few films, A Propos de Nice, Jean Tarnis the Swimming Champion, Zéro de Conduite and L’Atalante.  All experimental and made on slender budgets, they met with opposition from the distributors and Paris censor.  Today his films are shown in France in the neighborhood theatres an he is considered one of the very few originals who have ever worked on film.

NOTE:  At the conclusion of Zéro de Conduite, house lights will go on so that those who want to leave early may do so.

Filmed in less than three weeks, Easter Island is a remarkable feat of cinematography and editing.  It grew out of the Franco-Belgian Expedition to Easter Island, undertaken jointly in 1934 by the Trodacero Museum, Paris, and the Musée Royale de Bruxelles for the purpose of making a general survey of the island the monolithic statues for which it has become famous.  The film as finally edited emerges as a record not only of the work of the expedition, but also of the present-day life of the inhabitants.  Anthropological information is the burden of the commentary; the visuals and the music combine to create an impressionist picture of relapse and decay which finds culminating poignance in the sequence depicting the island leper colony.  From both the scientific and aesthetic points of view, the film is one of the most mature and illuminating documentaries ever produced.  Although the commentary is in French, the picture is clearly comprehensible with out a knowledge of the language.

Unfavorable comments: “marred by mawkish sentimentality, trite subtitles”; “Taking it as it probably looked to people in 1919 it didn’t seem so funny as it seemed to strike most of the audience”; “shoulder high corn – not my dish”; “reaction of audience childish at times; many laughed unnecessarily”; “Why, oh why do we have to put up with the chortling, the snickering, and the general vulgarity of the more uncouth members of the audience whose performance this evening was disgusting to say the least”; “the most juvenile audience this society has ever had – the reaction might have been expected at a suburban Saturday matinee”; “This movie is a stinker! a waste of time”; “too long for idea, short story padded to novel length”; “dreadfully slow moving, neither entertains nor edifies today, but important for the film historian”; “three leads tended to overacting which of course was the style then.”

Biography of a Motion Picture Camera – “very lucid and interesting but rather incomplete”; “education – excellent”; “presents interesting facts adequately, but not particularly well done as a film”; “best as far seen on subject”

A Tall Order – “very well made, pace slow but suits subject”; “exceptionally good, clear and concise”; “most competent, interestingly handled; good to see this sort of subject for a change”; “more like this”; “love this”

Wind From the West – “excellent photography, composition”; “good, but ruined by that soap opera voice”; “excellent in all respects, refreshing”; “delightful simplicity–could hold my interest through several screenings”

Mouvement Perpétuel – “most exciting film of evening; although apparently amateurish, in many respects very good”; “fewer like this, perpetual i seemed”; “fascinating, beautifully shot, skillfully edited exercise in film making, one of the best of its type from any country”; “meaningless drivel–program notes did not make film intelligible or vice versa”; “overlapping, repetitive editing annoys me–photographically undistinguished”; “camera work very interesting, theme poor–good to see Canadian work”; “shows cinematic talent, idea very good, expressed with clear sense of rhythm and movement–deserved its award”; “experimental, didn’t seem to achieve its purpose, but interesting”; “let’s have more experimental films like this”

A MEMBER WRITES:  “The programming hit a new low!  (Jan. 15)  Imagine having 64 minutes of shorts–almost all dispensable–and then a 7 reel full length film!  A few more programmes like that and I can see that the arty, cliquey set running the society will have the organization all to itself and then be free to run any number and kind of shorts it wants and perhaps even two full-length films in one evening!”