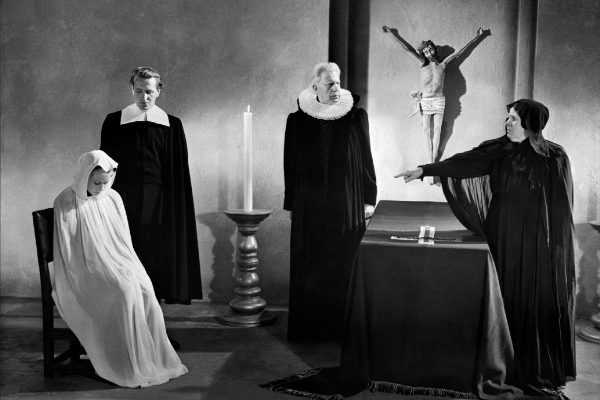 LOBBY FILM from 7.45 to 8.10 p.m. – a set of colour transparencies on master pieces of contemporary painting prepared by Louis Shore

Joris Ivens stands today at the top of his profession as a documentary filmmaker.  AT the age of 29, after studying films at his film society in Amsterdam, he turned to film-making himself.  The new railroad bridge over the Maas River in Rotterdam was the subject which he as an amateur chose in order to study the ABC of movement and rhythm.  “What I wanted was to find the rues, the laws of film-making.  ..If anyone knew about the relation of movement on a screen he was keeping it to himself and I would have to find out for myself.  ..The editing was a very tough problem for me.  I didn’t even know how to start it, so from every shot I filmed I made a rough sketch on a file card with arrows indicating the movement within the shot, and then arranged these cards before I cut any precious film.”  A synchronized score from recordings will accompany the film.

The aim of the director was to use for the first time in a film some of the coloured illuminations which abound in XIVth and XVth century manuscripts and Books of the Hours–an aim which he has realised with triumphant success.  The illuminations show the mode of life of the nobles and peasants in the middle ages.  Beginning with the creation of the world, the film contrasts life in the Garden of Eden with the life of the peasant, then describes the life of the nobleman with its hunts, tournaments and wars.  A more intimate view of the deaily life of the period shows the use of public and private baths, the preoccupation with fashion and the deep religious feeling.  Finally there is evoked the concept of the equality of man in the face of death, giving rise to the Danse Macabre and to scenes of the Last Judgment.  The images are accompanied by music of the period. 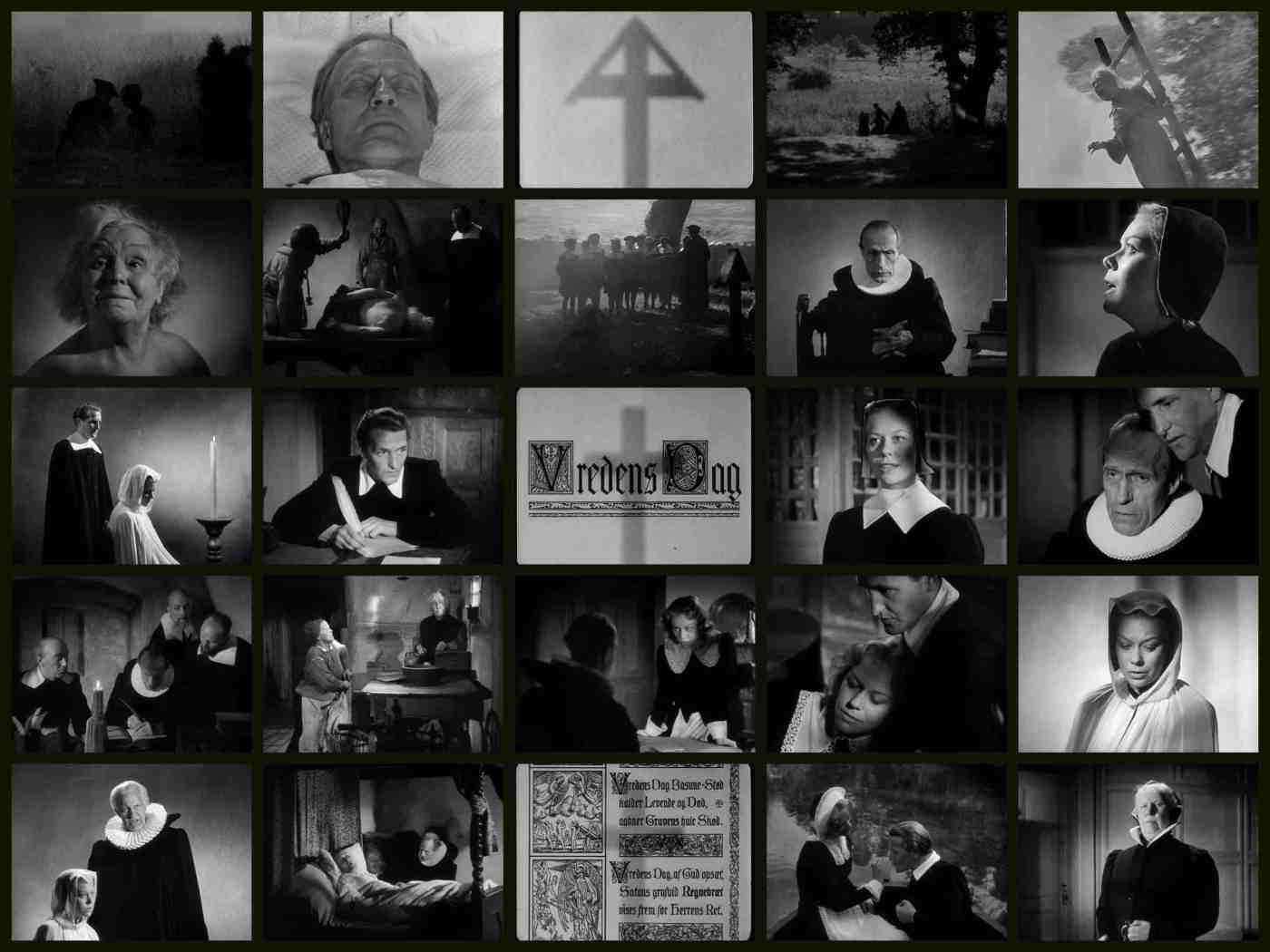 Day of Wrath is Carl-Theodor Dreyer’s eleventh film.  Apart from documentaries for the government, he made only one feature between it and Jeanne D’Arc (1928)–and that was the fantastic Vampyr (1932).  A strong individuality marks the work of this great director.  He is that very rare person in movies today–a moralist, a classicist and an incorruptible artist.  In addition he is truly a master of the film medium.  As James Agee has stated, “There is only one rule for movies that I finally care about: that the film interest the eyes, and do its job through the eyes.  Few movie makers do that; Dreyer has never failed to.”

The professional film critics in Denmark and New York, irked by the slow tempo of Day of Wrath, tore the work to pieces.  Archer Winston and James Agee defended it, the former declaring it one of the best films ever made; London critics called it a masterpiece.

Of his style, Dreyer has said, “Each picture carries its own style in itself and I have to find it anew each time.  ..The style of The Passion of Joan of Arc was set by me before I had even started on the script.  But this style was good for just one picture.  Day of Wrath was made in a quite different style, again not to be repeated.”

Ebbe Neergaard who prepared the Index on the work of Dreyer for the British Film Institute analyzes the film: “In Day of Wrath the camera takes us back 300 years to the year 1623, a distant and slow moving period.  We are transported to a well-to-do parsonage in the country.  Both inside and out all is quiet.  The parson, Hr. Absalon, is an elderly ascetic type.  His young second wife, Anne has become very quiet herself from living there with him and his old mother, an obstinate and vicious-tongued woman who hates her daughter-in-law.  Dignity is the main note struck in this setting.  The conflicts that must exist in and between these people are sublimated.  We have to look carefully to find them.  That is what Dreyer wants; that the audience should discover for itself.

There is no make-up: we see Anne’s smooth and childishly rounded face, and slowly we discover feelings there which we had not expected–hate, love and joy.  Particularly the last surprises us; to see real joy in this mild and almost empty young girl’s face which before glided so disconsolately through the shadows.  ..We are given such a close study of the faces that we get to know the characters intimately.  …

To Dreyer the witchcraft is only the background.  The important thing to him is the triangle; he wants to describe the so-called illegitimate love.  ….The film’s dramatic conflict is really between Anne and her surroundings, represented by the silence within the parsonage and the wild witch-hunt outside the windows.  The focus of interest is on the fate of this young girl–a beautiful, but not unusual young girl, ripe for love, but who goes under in a morass of sin and the consciousness of sin.  The surroundings and the morals they contain must be preserved, not the individual–not youth.

Dreyer has not in this film set himself up to judge the problem of witchcraft–living in a modern age the question does not exist for him.  He uses it to intensify his story, because it did at that time stamp the lives of the people he is describing, and to this day the roots are there; we still live surrounded by tabus and superstitions and unnatural conventions.  Day of Wrath is with all its “objectivity” and cruel mildness, undoubtedly Dreyer’s most radical film.

In this film, which illustrates the power of surroundings over people, Dreyer has paid special attention to the settings.  He searched out localities in Denmark that had preserved a Renaissance atmosphere.., and the exact atmosphere was underlined by the lighting.  … The figures appear outlined in grey against the black or blinding white background–always in contrast.  A light is thrown over Anne’s face and draws the expression towards us, or it is used to emphasise all the wrinkles in Absalon’s harassed features.  The material of the costumes is given texture under the light–woollen or silken–warm or cool.  …

The sound track is almost revolutionary in its Spartan quality.  Time after time the silence plays an active part.  The dialogue stands out in relief in short, clipped sentences as meaningless as any ordinary conversation, yet revealing.  There is one sequence where for a long time nothing is heard except the urgent but thin tinkling of a bell calling the people to chase the witch.  Then the stylised shouting of the crowd, not loud, but deafening in its constant mad repetition.  …

Dreyer has always said that actors should be chosen for their mental resemblance to the characters they are to play, as you can read the mind of a man through his facial expression.  Lisbeth Movin understood the part of Anne instinctively and immediately.  …  In contrast to the violent struggles with Falconetti during the making of Jeanne D’Arc, Dreyer often let her play a scene without any rehearsal.  … She turned out exactly as he wanted her: an ordinary Danish girl, pretty, sweet and amiable, but with that erotic undercurrent which makes her dangerous.  I think it will be found that this is the greatest and most important artistic fact in the film: the normality of Lisbeth Movin’s performance lends a universal aspect to it which is much more convincing than any brilliant prima donna act.  I am sure (though I have not said this to him) that Dreyer was interested only in Anne in this film.  I believe that is why in the end we are interested only in her, and that is all to the good.  (In Anne we see the figure who appears again and again in Dreyer’s films–lonely, passive, helpless, but who draws a kind of gentle strength from this helplessness.)

There can be little doubt that Dreyer is more responsible than Anna Svierkier for the success of the witch, Marte.  ..The smaller parts, particularly the priests in the tribunal, Dreyer chose from amongst painters and sculptors.  … In Thorkild Roose, one of the finest older actors at the Royal Theatre, Dreyer found a combination of sternness, ascetism, gentleness and repressed eroticism.  He filled the mentality of the part completely.”  …

Zéro de Conduite was generally highly commended for its fresh, individual approach and point of view.  Several expressed a desire to see other Vigo films.  One member found it “frankly baffling”; another who liked it, pointed out the need to “understand three special viewpoints: French, Vigo and children!”
Quotes:  Exciting as hell, and what a revelation”—“Imaginative directing”—“I approve highly the director’s complete freedom from the usual theatrical slant”—“Challenging, no concessions to convention, full of surprises, should be seen more than once”—“Photography gave me a new experience; I viewed the film as if I was one of them at the age and was amazed at how many scenes brought back emotions I had felt in parallel circumstances.”
Several expressed appreciation of Mrs. Sinclair’s remarks; only one criticized them.
Among short subjects, Chinese Painting Brush was greatly admired; Night Mail well liked by all but one, who found it dull and tedious; Family Tree was well received and Easter Island considered interesting and fascinating, though some found the French commentary a handicap and one thought the film “very depressing”.

Greed was considered by most members to be a memorable and powerful film; some expressed the wish to be able to see the original 24 reel version and regretted its cutting down.  On the other hand, some felt there was too much detail and “building up” in the first half; while one or two criticized dated subtitles, moments of stagey acting and “labored symbolism”.
Quotes:  “One of the great, compelling movies of all time; probably still to be equalled in the field of American realism”—“Had a terrific effect on me because characters became so real”—“Excellent ‘documentary’ backgrounds”—“No punches pulled”—“Adult point of view, superlative observation, completely absorbing”.
And lastly – two interestingly contrasting viewpoints:
“Trina not well enough motivated–her miserliness should have been gradually built up”; and to the contrary: “First half gave us time to really become acquainted with the characters and to understand better what followed.”  The music cued to the film from phonograph recordings were praised generally.

REPLY TO ENQUIRES RE TINTING IN Greed

The yellow colour on the screen of the symbolic “gold” shots was achieved by inserting a “filter” into the light beam of the projector at the appropriate times.  After some experimenting, a 5X7 frame was used to hold a piece of theatrical “straw gelatine”; this was placed about 2 feet in front of the projection lens.  Bruce Young, a member of the House Committee cued in the gold filter just as records are cued in for the music scores.  When Greed was first made, the prints and the necessary sections printed on positive stock of the correct colour.  Such small details as gold teeth, gold bars of the cage, etc. were coloured by hand as 35mm film was slid along a long work table while an assembly line of girls painted the various details.

NEXT EXHIBITION MEETING:  MAY 14: Fall of the House of Usher, Daybreak in Udi, Look to the Forest, The Pawnshop (Chaplin)