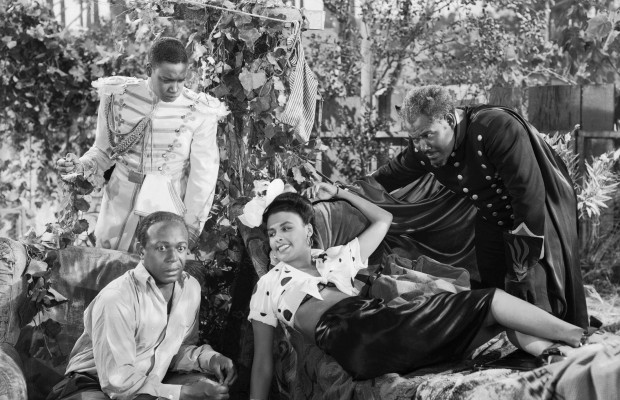 Toronto Film Society presented Cabin in the Sky on Sunday, August 4, 2013 as part of Season 66 Raiding the Vaults at the George Eastman House Weekend.

Although it was only a moderate Broadway boxoffice success, ‘Cabin in the Sky’ was one of the artistic and critical hits of a couple of seasons ago, winning a limited, but intensely loyal following, many of whom went back to see the show one or more times.  The fate of this film version of the musical may be somewhat parallel.  It has been made with obvious sincerity and good will, but its appeal is likely to be somewhat restricted, with the Ethel Waters and Eddie Anderson names as help.

Some of the boxoffice limitations of ‘Cabin’ are inherent in the original work.  In the first place, it’s fantasy, which is inclined to be tough to sell.  Secondly, it’s an  all-Negro show, making it doubtful material for the south and likely to decrease its audience in other parts of the country.  Only all-Negro picture ever to click commercially was the great ‘Green Pastures,’ which had a tremendous advance rep as a legit show.  Finally, the picturization of ‘Cabin’ lacks the imagination and skill that such a subject should have.  So, though it’s a tender, affectionate film, it is a disappointment.

The picture version is little changed from the original stage show.  It still tells of Little Joe Jackson’s weakness for dice, likker and the seductive Georgia Brown, of his mortal wound in a barroom brawl, and of his six-month period of grace obtained by his eternally-devoted wife, Petunia.  It still shows the contest between Lucifer, Jr., and the General for Little Joe’s soul, with Little Joe’s final tumble from grace and his orgy at Jim Henry’s cabaret, and his and Petunia’s ultimate salvation on a ‘technicality.’  Unlike the stage original, however, the picture presents all this fantasy as a dream flashback, and brings Joe back to life for the fadeout.

In the legit version, ‘Cabin’ seemed constantly to be constricted by the limitations of the stage.  But difficult has not been solved in the present film adaptation.  The yarn still appears weighed down by unimaginative conception, the few changes in the screen medium merely filling out the story, without expanding or developing its fantasy.  In only one of the two moments, such as the stairway to heaven finale, is there any apparent effort to utilize the facilities of the camera.  There are far too many closeups, particularly in the vocal numbers.

Ethel Waters remains the one transcendant asset of the film ‘Cabin,’ just as she was in the original.  Her sincerity, compassion, personal warmth and dramatic skill, plus her unique talent as a singer make her performance as Petunia an over-powering accomplishment.  Eddie Anderson, best known as ‘Rochester’ on the Jack Benny radio program, is effective in the comedy moments of the Little Joe part, but his mugging mars the emotional scenes and his singing is strictly for laughs. Lena Horne is a definite click, both vocally and dramatically , as the fatal Georgia Brown, while Louis Armstrong has merely a few moments on the trumpet and a couple of lines as one of the Lucifer, Jr. ‘idea men.’  Rex Ingram scores in his original role of Lucifer, Jr., while Kenneth Spencer, John (Bubbles) Sublett, Oscar Polk and Ford (Buck) Washington are acceptable in supporting parts.

Besides the original songs, including ‘Taking a Chance on Love’ and ‘Cabin in the Sky,’ there are three new tunes ‘Happiness Is a Thing Called Joe,’ ‘Life’s Full of Consequences’ and ‘Li’l Black Sheep.’  The Hall Johnson choir provides notable help, Duke Ellington’s orchestra plays a hot number and there are several good dance sequences.

Regardless of the boxoffice reception of ‘Cabin,’ the sincerity evident in its production may provide an answer to the liberal and Negro groups that criticized Metro for its production of ‘Tennessee Johnson.’  And whatever its boxoffice fate, ‘Cabin’ is a worthwhile picture for Metro to have made, if only as a step toward Hollywood recognition of the place of the colored man in American life.

“Cabin in the Sky” is a bountiful entertainment.  The Metro picturization of the Negro fantasy, which settled down at Loew’s Criterion yesterday for what should prove to be a long tenancy, is every inch as sparkling and completely satisfying as was the original stage production back in 1940.  On the trip to Hollywood the script was juggled around somewhat and in deference to the Hays office the character of Georgia Brown was toned down, yet she is a bewitching temptress as interpreted by Lena Horne.  But essentially the story line remains intact and “Cabin in the Sky” still is the delightful fable about a battle of wits between the soldiers of heaven and the devil’s henchmen over the soul of Little Joe Jackson, the rascally but likable spouse of the righteous Petunia Jackson.

Ethel Waters and Rex Ingram alone of the  play’s cast are in the film as Petunia and Lucifer Jr.

Since Dooley Wilson apparently wasn’t around to be Little Joe, Metro made a very happy choice in Eddie (Rochester) Anderson.  But the main thing is that Miss Waters is on hand, for there are songs to be sung in “Cabin in the Sky,” and in that respect she is incomparable.  “Taking a Chance on Love” is a song that has worn well in three years, but it is sung so refreshingly and with such plaintive feeling by Miss Waters that it sounds like a brand new number.  She does equally well with the title song and two others written especially for the film, “Happiness Is Just a Thing Called Joe” and “Life’s Full o’ Consequences.”  The magic spell Miss Waters’s singing casts over an audience is so enthralling one is apt to unintentionally slight her acting ability.  Her portrait of Petunia is magnificently limned, however.

“Cabin in the Sky” is by turn an inspiring expression of a simple people’s faith in the hereafter and a spicy slice of their zest for earthy pleasures.  With his weakness for dice and the wiles of that shameless seductress, Georgia Brown, Little Joe has a 1-A classification on the devil’s registry until the Lord, in answer to Petunia’s “powerful” praying, grants him six months more on earth to mend his ways.  Thus the public relations department of hades, directed most amusingly by Mr. Ingram, sets about planning the downfall of the bewildered Little Joe, who tries hard to be good, while the soldiers from heaven struggle valiantly to keep him on the straight and narrow path.  When Metro finally decides to redeem Little Joe, it does so with a bang, dragging a tornado that levels Jim Henry’s wicked dance hall.  Before the big blow strikes, the place is pretty nearly wrecked anyway in an old-fashioned chair-and-table throwing slugfest, so that production touch seems a little superfluous.

Mantan Moreland, Willie Best, Fletcher Rivers and Leon James are delightfully wicked as Mr. Ingram’s assistant “idea” men; Kenneth Spencer is excellent as the Rev. Green and heavenly general, and so are a host of others, including John (Bubbles) Sublett, Louis Armstrong and the Hall Johnson Choir.  In short, this first, all-Negro screen musical in many a year is a most welcome treat.