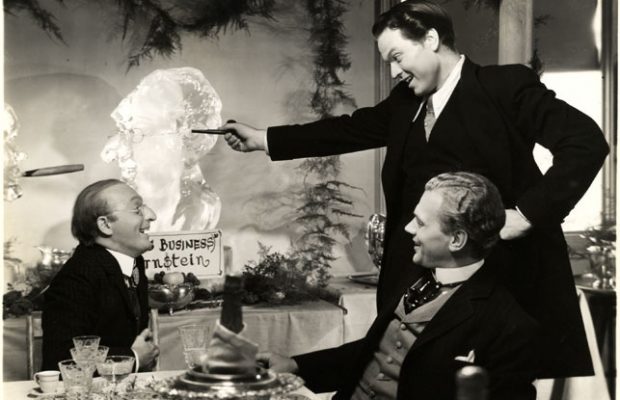 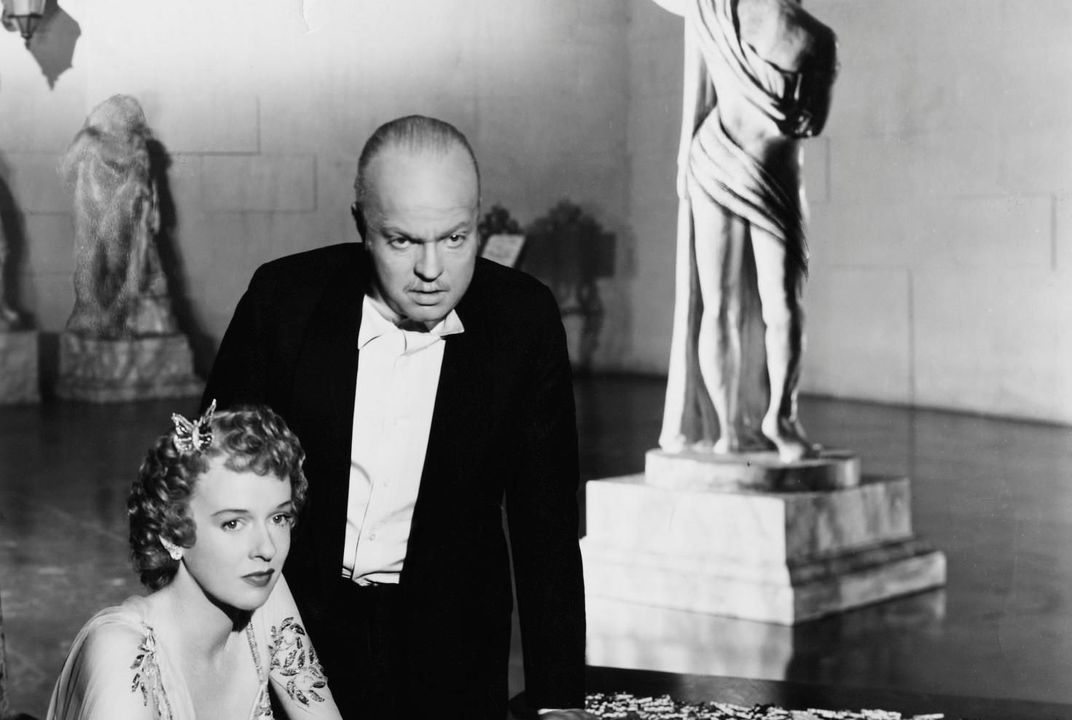 So much has been written about Kane that it’s even become a cliche to start a note on it with “so much has been written about…”.  Perhaps the most famous first film ever made, it is one of the only two (with The Trial) that Welles was able to make exactly as he wished and to complete without interference, though it had its share of troubles at that.  Held up for months after completion, amid rumours that it portrayed a stinging parallel to the life of William Randolph Hearst, it was finally released, eliciting protests from such Hearst stalwarts as Louella Parsons and boycotts by the advertising departments of Hearst papers.  Hailed by Variety as one of those innovatory pictures whose history-making qualities would be reflected not only in critical acclaim but in public curiousity and financial success as well, it was indeed generally lauded by reviewers but never achieved its complete boxoffice potential, partly because it never was given a full RKO circuit showing, although distributed by that company.  Needless to say it has long since become a standard classic (especially respected abroad) with many art-house, film-society and TV revivals.  It begins with the death of a powerful, eccentric newspaper tycoon, and the enigma of his last spoken word.  As an unseen reporter interviews various people who knew Kane, Welles puts the bits and pieces of the complex character together like a giant picture-puzzle.  There has been much controversy over just how much of Welles’ fascinating way of telling this story constituted something “new” in film styles.  Striking “off-beat” cinematic effects had not been recently used (some not extensively since silent days) and critics of the day were somewhat overwhelmed, making claims for Welles’ “inventions” that weren’t always justified.  Welles himself was quoted as saying: “I didn’t introduce anything new; I just used the resources and techniques of the medium others had been neglecting”.  Certainly Griffith and others had used flashbacks galore; Renoir had used deep-focus; Ford had used ceilings; strange camera-angles and lighting had abounded in the silent “expressionist” German film.  Even the brilliant simulation of a “March of Time” short that virtually opens Kane had been anticipated by Monta Bell, who in 1929 began his Bellamy Trial with an apparent MGM newsreel.  In 1934, in William K. Howard’s Power and the Glory (script by Preston Sturges), several characters gave out-of-sequence flashback testimony on the life and character of the deceased hero.  So–nothing new under the sun?  Possibly–aside from some innovations in the use of sound, that potentially expressive element of the talking film that has been almost as neglected as the visual one!  But whatever the origins of Welles’ effects, let’s be grateful that he used them when others weren’t doing so (Ford for one was an honourable exception) and rescued the movies from the habit of bland matter-of-factness and the cult of the “unobtrusive”!  And let’s admit that he put them all together in a manner undeniably personal and original.  In closing, mention should be made of Kane‘s merits as a showcase for the remarkable range and versatility of Welles as an actor.

Note:  Records heard are by a group of pioneer New Orleans jazz musicians brought together by Welles in Los Angeles.  He was one of the pioneers in reviving interest in this type of music.