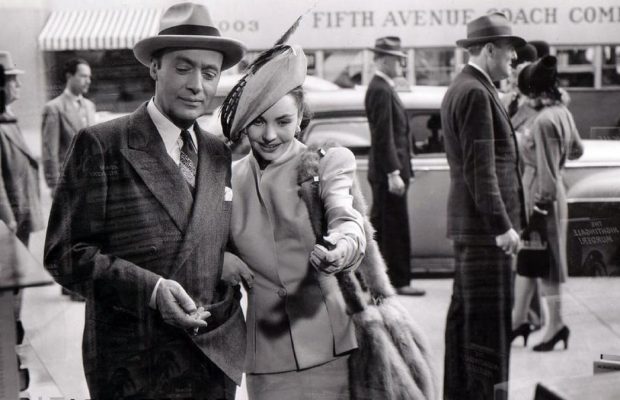 Toronto Film Society presented Cluny Brown (1946) on Sunday, November 10, 1985 in a double bill with Our Hearts Were Young and Gay as part of the Season 38 Sunday Afternoon Film Buffs Series “A”, Programme 2.

In 1946, Ernst Lubitsch returned to directing after a period of three years, during which time he had been recovering from a series of heart attacks.  This was to be his last directed picture.  In this later example of Lubitsch’s famous “comedies of manners” he attempted to evoke the wit and charm of his earlier sparkling films and, although the atmosphere of the times compelled a more serious approach, the general result delivered an enjoyable, irreverent satire of the British class system.

The success of The Shop Around the Corner (1940) and Heaven Can Wait (1943) marked a new phase in the Lubitsch style, adding a reflective tone tot he witty ironies of his previous sophisticated comedies.  The novel by Margery Sharp, Cluny Brown, was an international bestseller in 1944, and Lubitsch’s treatment, complete with the renowned visual “touches”, was expected to make for terrific box-office results.  But the relative failure oft he film was attributed to various problems: the satire of the British blindness towards the German threat may have been hostilely received; the strained playing of Jennifer Jones and Charles Boyer in a comedy unsuited to their talents; the unfortunate choice of Jones as the fey, slightly wacky heroine (“Never had he been strapped with an actress so utterly humourless”, Louis Giannetti, Master of the American Cinema); and generally speaking the post-war tastes were shifting away from this type of screen comedy.  Despite all these observations, however, Cluny Brown is seen today as one of Lubitsch’s more successful tongue-in-cheek tales.  Perhaps, as Lubitsch himself felt, the film was too sophisticated and too rich in satire for the audience of its time.

Jennifer Jones, as the renegade Cluny, in fact combine the right amount of whimsy and innocence in a role which was atypical of her more serious endeavours.  Generally regarded as never having equalled the Academy-award winning performance of The Song of Bernadette (1943), Jones is often maligned for her neurotic style of acting, but it must say something for her range to see her go from the brazen half-breed Pearl Chavez in Duel in the Sun (completed in the same year as Cluny Brown, although released later), smashing food into Gregory Peck’s face, to the light-hearted, dreamy Cluny, attacking a plugged drain with glee in Cluny Brown.  Charles Boyer was similarly dismissed in this film, for the same reason–this was his first attempt at a comic role and, although he still plays the traditional foreign lover, he tackles the Lubitsch style of farce and sophisticated comedy in a performance which was seen as a transformation solely achieved by the director.  Although both Jones and Boyer were complimented for their portrayals, it was Richard Haydn who received the rave reviews.  As the stuffy, complacent chemist who intrigues Cluny, Haydn manages to steal scenes throughout the film, with his nasal twang and his hilariously pompous attitudes.  The supporting cast, carefully chosen from Hollywood’s “British colony”, were all particularly adept at playing the different levels of the English class society.  Reginald Owen, as Sir Henry, is humourously befuddled and vague, while Margaret Bannerman represents the indomitable upper-class matriarch whose sense of order never deserts her.  It is Lady Alice who provides the ironic counterbalance to the forceful commentary of Adam, the outsider in whose view the satire is achieved.  Peter Lawford and Helen Walker, as the young romantic couple, are both effectively humourous.

Many of the Lubitsch touches are still in view in Cluny Brown–the double entendres, the closed door, the close-up reaction shots, etc.–but it is perhaps the simplicity and quietness of Lubitsch’s direction in this film which dominates.  For the first time, he develops the entire group of secondary characters more than before and allows them all the chance to reveal their views.  Also, there is less of the commenting camera in evidence and longer takes in certain scenes.  The epilogue, which reveals to what extent the major characters have succeeded in taking their place in society, is shot entirely in pantomime and retains all of the Lubitsch charm and raffishness.  By maintaing a balance between the tragic and comic elements, and the positive and negative characters, Lubitsch succeeded in creating “a radical and unconventional reworking of the comic traditions behind his earlier films” (William Paul, Ernst Lubitsch’s American Comedy).