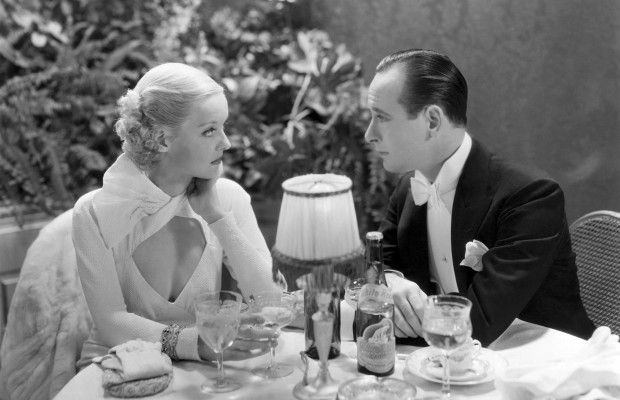 Toronto Film Society presented Ex-Lady on Sunday, May 12, 2013 as part of Season 66 May Festival: The Pre-Code Weekend.

Ex-Lady received pretty unflattering reviews and Bette Davis claims she found the film rather distasteful.  Eighty years later, I think it’s quite a film.  It’s a remake of Illicit, the 1931 film starring Barbara Stanwyck and those two years made a difference in how the film flowed.  This is one of those stories where the woman is the one who feels marriage would change the relationship for the worse as well as worries her career will suffer.  Basically, she feels she will be the loser if things change or go awry with the marriage.  Interestingly, one element that is scarcely touched upon in most films are parents but here we get to meet Helen’s parents and see their reaction when they find out that she is in a sexual relationship without being married.  It’s an uncomfortable scene that reflects and contrasts the differences between older European parents and modern youth.  I think you have to admire Helen’s resolve to stay strong in her conviction to live her life on her own terms.  Watch for the nightclub scene.  It has to be one of the sexiest scenes—all action, no words.

‘Ex-Lady’ is a weak sister.  Probably the best campaign angle is the trite sensationalism which the Strand is currently ballying.  It’s one of those pseudo ultra-modern things which only draws laughs in the wrong places.

Bette Davis is the talented commercial artist who is content to continue, without benefit of clergy, with Gene Raymond, advertising man.  Latter finally forces the legal banns, from which point a breach ensues, bringing in Monroe Owsley as the light villain who is frankly on the make.

Everything about ‘Ex-Lady’ is stupidly frank, dating from the initial premise of the meretricious relationship, so that there’s no suspense for the fan who, if he or she has ever before paid an admission fee at a wicket, must sense just how it will all iris-out.

In between there are any number of banalities, from casting to dialog.  An example is the situation where our hero and the villain are playing around; hubby wants to know, ‘You didn’t!’ as a checker-upper on her virtue.  That’s almost on a par with the burlesk mellerdrammer which had previously been screened in Ruth Etting’s short on this same bill.

Miss Davis’ costume choices seem all awry for her personality, including one high-necked affair that’s dangerously reminiscent of the giraffe women in the Ringling-B&B circus.  As for Kay Strozzi as a vamp, a couple of those camera shots almost couldn’t be on the level.  Seemingly this was recognized, as evidenced by the choppy film editing, but 56 minutes is short enough, so there’s no latitude for much further shearing.  This ‘un will set back Miss Davis.  And just as she was coming along.

Bette Davis, a young actress who has shown intelligence in the rôles assumed to her in the films, has had the misfortune to be cast in the principal rôle of “Ex-Lady,” now on view at the Strand. What that somewhat sinister event meant to her employers was that Miss Davis, having shown herself to be possessed of the proper talent and pictorial allure, now became a star in her own right. What it meant to her embarrassed admirers at the Strand on Thursday night was that Miss Davis had to spend an uncomfortable amount of her time en deshabille in boudoir scenes engaged in repartee and in behavior which were sometimes timidly suggestive, then depressingly näive and mostly downright foolish.

For “Ex-Lady,” in intent if not quite in execution, is an effort to dramatize the relative advantages of free love and marriage as directly and unsubtly as possible.  It offers, in several of its scenes between Miss Davis and Gene Raymond, an honestly written and truthfully enacted picture of the domestic problems which harass two persons in love with one another.

The story presents Miss Davis as a brilliant young artist who desires to retain her independence by arranging her amours as informally as possible.  Her lover, a young advertising writer, wants her to marry him.  He persuades her to marry him, and immediately the jealousies and petty quarrels she had predicted begin cropping up.  They separate, take different apartments and resume their old informal alliance.  After each has detected the other in an infidelity and been hurt by it, they agree that marriage is the best arrangement after all.