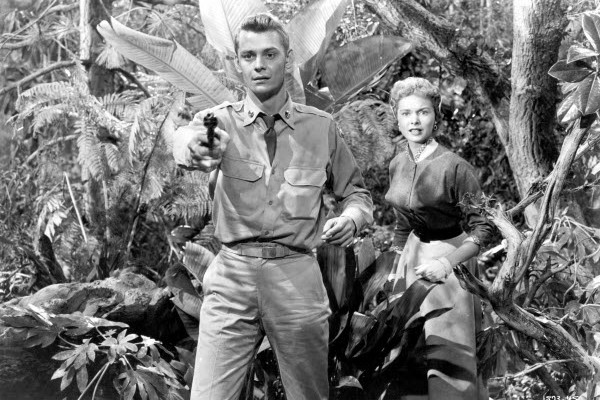 MG.M.’s Fearless Fagan sought the distinction of being a comedy based (albeit loosely) on a real-life situation.  Writer Eldon Griffith’s article about Private Floyd C. Humeston, the reluctant soldier who brought his pet lion (Fagan) along when he was inducted into the United States Army, had appeared in LIFE magazine in 1951.  Subsequently, M.G.M. retained Griffiths to co-write a story suitable for adaptation, and their publicity department crowed, “LIFE inspires a movie”.  Producer Edwin H. Knopf must have seen in the article a premise which would readily yield dozens of comic scenarios; the film was produced and exhibited within a year of the LIFE piece.

Today’s more cynical viewpoint–that it is movies which have inspired life–certainly has a case with Fearless Fagan.  Greatly expanding on Humeston’s escapade of hiding his circus wrestling partner on an army base, the film turned screenwriting fancy into fact by penning in a Hollywood triumph for its fictional ‘Pvt. Floyd Hilston of Company J’.  Humeston, still in the service, was given leave to accompany his pet to Hollywood, and feline Fagan’s biographical details became part of an M.G.M. publicity sheet.  Mention was made of Fagan’s taste for Strauss waltzes and the somewhat salacious sounding tidbit that Janet Leigh had received “the biggest kiss in screen history” (Fagan’s tongue is 14 inches long).  Later, one reviewer went so far as to laud the lion as “a remarkable actor…a range of expression considerably superior to that of, say Rita Hayworth.”

Director Stanley Donen was squeezing Fearless Fagan into the busiest period of his still-young career.  This was the year of Singin’ in the Rain which Donen co-directed with Gene Kelly, considered then and now as one of the best musicals Hollywood ever made.  A dancer from childhood, Donen made his Broadway debut in 1940 at the age of 16 in ‘Pal Joey’–Kelly was the star and Donen was a chorus boy.  Assisting Kelly with the choreography for subsequent shows, Donen’s co-directorial start came with 1949’s On the Town; again, at Kelly’s invitation.  He followe this with Royal Wedding, an Astaire musical; Singin’ in the Rain; Love is Better Than Ever, a tepid Elizabeth Taylor vehicle, and Fearless Fagan.  He went on to make, notably, Seven Brides for Seven Brothers (1954), Funny Face (1957), Charade (1963), Two For the Road (1967), and, most recently, Movie, Movie (1978).  If anyone has brought skill and permanence to Hollywood’s longrunning taste for lightheartedness, it is Donen.  The studio men at M.G.M. must have known that in Fearless Fagan they had as lighthearted a project as any, and that a man who has staged Broadway musicals has already had to deal with talents even more unwieldy than their 400 pound jungle star.

It was along these lines that Carleton Carpenter, another long-time song and dance man, was chosen for the lead.  Carpenter had made fresh-faced supporting appearances in Two Weeks With Love (opposite up-and-coming Debbie Reynolds), Father of the Bride (with Spencer Tracy at the head of the cast) and Summer Stock (Gene Kelly and Judy Garland), among other films, in the two years prior to Fearless Fagan.  Described as a songwriter, piano player and soft-shoe virtuoso, Carpenter was heralded only with M.G.M.’s slightly neutral sounding announcement, “Versatility marks new M.G.M. star.”  Soon after making Fearless Fagan his film appearances became sporadic, and Carpenter began to return to the stage and nightclub appearances which were his show business origins.  His star faded but his versatility remained intact–later he wrote mystery novels.

Janet Leigh, said to be Norma Shearer’s personal discovery in 1947, was one of M.G.M.’s hardiest contract employees, a veritable workhorse of the wholesome, ingénue role.  She had made 15 films in the five years prior to Fearless Fagan, having started as a music student with no acting experience.  Her pace barely slackened until the mid-Sixties, throughout which time she had been a leading star. Besides the inevitable better-forgotten projects I the list of her films, there is Orson Welles’ Touch of Evil and Hitchcock’s Psycho where she shone dramatically; on the whole, however, she is still considered “at her best with fluffy comedy.”  In Fearless Fagan it seems that she was unable to surpass the fluffiness of her co-star–Leigh confessed during the shooting that lions were even more treacherous scene stealers than babies.