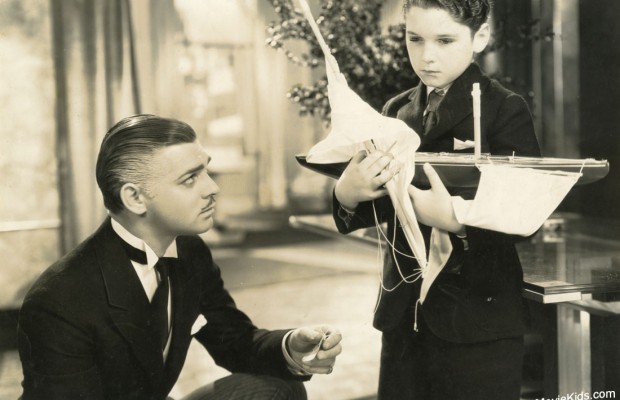 Toronto Film Society presented One Strange Interlude (1932) on Sunday, May 24, 1981 in a double bill with Fearless Fagan as part of the Season 33 Sunday Afternoon Film Buff Series, Programme 10.

From the filmgoer’s point of view, the outstanding thing is the acting of Norma Shearer, Clark Gable and May Robson….Clark Gable’s powerful personality shines steadfastly through the misty atmosphere of mixed psychology…Norma Shearer’s response to the demands of an extraordinarily exacting part shows that she has a far greater range as an actress than one would have suspected, even after her fine work in many intelligent talkies.  Strange Interlude is a film that will be widely discussed.  It must be set down as a cinematic novelty to be seen by discerning audiences.

Those elements of the play which are so poignantly O’Neill have for the screen, somewhat in the movie fashion, been subdued, sandpapered and varnished toward euphemism.  There was in the making of Strange Interlude an evident awareness that it was strong meat.  A borrowing from the stage through it is, it is a stepping out for the motion picture.

I believe that motion pictures offer great possibilities as a medium of art. The pictorial effects on the screen are real, while those on the stage, especially outdoor scenery, are artificial.  The camera can interpret as well as create by moving rapidly to any idea or any place in the world….Yet does Hollywood make anything at all of art in motion pictures?  Is Hollywood’s attitude sympathetic and creative or base and destructive?  Nearly a year ago, when I was in California, I talked with executives of Paramount, Universal, Warner Brothers, and Metro-Goldwyn-Mayer.  I found them all to be business men; none was in any sense imaginative, creative, or colorful.  Mr. Zukor, Mr. Lasky, Mr. Thalberg, and others are not artists but business executives.  Of course, there would be less cause for complaint on this score if these business men allowed the writers, directors, and players whom they employ and control to exercise freely their artistic perceptions and capabilities.  But that is something they certainly do not allow.  I talked seriously on this problem with these gentlemen and may others, and here is the gist of our conversations.

These movie representatives admitted that they would prefer, for example, to buy the title only of, let us say, Eugene O’Neill’s Strange Interlude, their reson being that the play itself was far above the head of the average individual with whom the moving-picture theaters have to deal.  But with the title in their possession as property, their writers could make a movie script of parts which at least would bear some resemblance to Mr. O’Neill’s story.  Then they said this was necessary because really all that the great American public knew about this drama was that Eugene O’Neill had had a big success in New York City called Strange Interlude.  Sock one for America!

The Real Sins of Hollywood by Theodore Dreiser, in Liberty, June 11, 1932