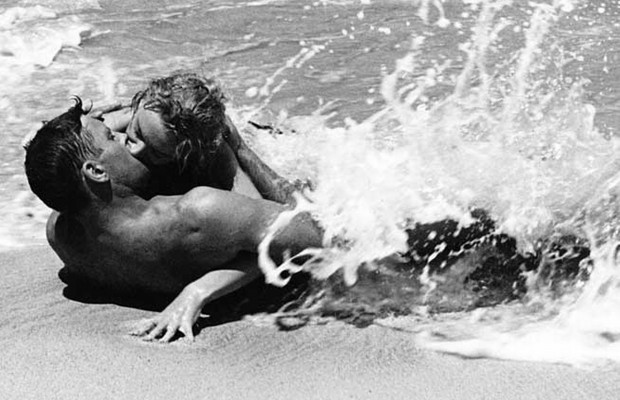 Toronto Film Society presented From Here to Eternity (1953) on Monday, September 17, 1979 in a double bill with Father’s Little Dividend as part of the Season 32 Monday Evening Film Buff Series, Programme 1.

Hollywood insiders shook their heads in 1952 when Harry Cohn, the notoriously tough president of Columbia Pictures bought James Jones’ sprawling novel From Here to Eternity for his studio.  This story of Army life at Pearl Harbour during the final months up to the Japanese attack was widely believed to be unsuitable for film because it had so many four-letter words, explicit sex and a cynical view of the corruption and brutality of army life.

However, after several writers had attempted a film script, Daniel Taradash, the co-author of 1939’s Golden Boy, came up with a script which satisfied both the censors and the U.S. Army whose cooperation was needed.  The Pentagon permitted the film company to shoot at Schofield Barracks in Honolulu, and provided personnel and equipment.

The film tells the interrelated stories of five people: Sgt. Milt Warden, the tough, realistic Army career man with his personal code of ethics, Karen Holmes, the frustrated, unhappy wife of a boring, insecure captain, Private Robert Prewitt, the sensitive bugler who is brutalized by Captain Holmes when he refuses to box for the company because he once blinded an opponent, and Lorene, the haughty B-girl who befriends Prewitt, and Private Angelo Maggio, the friendly scrappy guy who becomes Prewitt’s buddy.

The story behind the casting is fascinating.  Lancaster was signed after a complicated deal.  Columbia had tentatively picked Edmund O’Brien for the sergeant’s role.  Deborah Kerr, who had played proper British ladies, was cast against type as the adulterous wife.  Joan Crawford had withdrawn from the part.  Director Zinneman persuaded Cohn to take the slight, brooding Clift over John Derek or Aldo Ray.  Donna Reed was Cohn’s choice for the promiscuous Lorene.  Miss Reed was better known for clean-cut “girl next door” and respectable wife parts.  Finally there was Frank Sinatra, his career at low ebb, begging Cohn for a chance to play the wisecracking Italian private, Maggio, at a fraction of his former salary, winning the part over Eli Wallach.

From Here to Eternity proved to be one of those rare films where everything comes together.  Lancast, with his assertive, self-confident manner and superb physique was perfect as the tough sergeant.  The intense volatile Monty Clift threw himself into the part of Prewitt, taking boxing and bugling lessons for the role.  One of the films most poignant scenes is of Prewitt playing “taps” for his friend Maggio.

The proudest man at Academy Awards night, though, was Harry Cohn, as he saw his production receive the Best Picture Oscar.  In a year when the studios were tinkering with wide screens, Cohn proved that a good story filmed in black and white in the old familiar screen ratio could still be a winner.