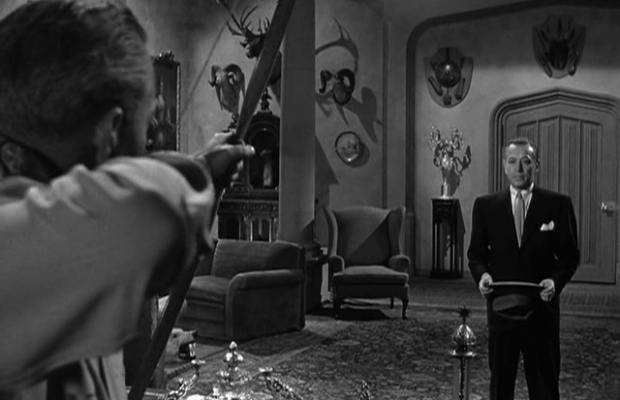 Toronto Film Society presented Johnny Allegro (1949) on Monday, October 24, 2016 in a double bill with Run for the Sun as part of the Season 69 Monday Evening Film Buff Series, Programme 2.

It’s always interesting to note the title changes for a film.  Originally, tonight’s film titles were first The Big Jump and secondly Hounded, which was actually the title used in its UK release.

Summarized by Gene Blottner in his 2015 book Columbia Noir: A Complete Filmography, 1940-1962, he writes this about tonight’s film:  Johnny Allegro is an entertaining minor crime noir.  The story, which borrows from The Most Dangerous Game is briskly directed by Ted Tetzlaff with nice photography by Joseph Biroc.  The acting meets the demands of the story.  George Macready again is the consummate villain, a classical music devotee, suave and cultured.  Nina Foch is properly alluring.  Raft’s understated acting fits the mood of the script perfectly.

Tom Howard remarked: I was surprised to find this film’s lovely high contrast photography credited to Joseph Biroc, as it is most uncharacteristic of his work which is generally couched in grey intermediate tones.  Doubtless the fine silhouette work, the deep focus and very high contrast were the inspiration mainly of director Ted Tetzlaff, himself a former fine cameraman.

Nina Foch is not always photographed from the most flattering angle, but she gives a winning performance, ably abetted by the other members of the cast, especially Macready, Raft and Geer.

The art direction by Perry Smith is another outstanding plus in the picture’s favor, whilst the screenplay is sufficiently intriguing and has more than enough action to satisfy the most ardent thriller fan.

In this film-noir, George Raft is Johnny Allegro, a former mobster who has started a new life as owner of a flower shop. He meets femme fatale Nina Foch and is soon involved in a socialist-led plot to flood the west coast with counterfeit money. He might have lived outside of the law, but is still a loyal American. He is contacted by Treasury Agent Will Geer, who knows Raft had escaped from Sing Sing but had served with distinction in the O.S.S., under an alias, during the war. Soon Raft is working for the government with Geer as his contact.

Will Geer (March 9, 1902 – April 22, 1978) is known to most people as the grandfather on television’s The Waltons. He was born in Frankfort, Indiana, the son of a teacher and a postal worker. His father left the family when Will was 11 years old. He admired and was greatly influenced by his grandfather, who was a self-taught botanist. It is said he knew the Latin name for all the plants and trees he came across. He had made a small fortune during the California Gold Rush, come back to Frankfort, and built the town’s first opera house. Will set out to be a botanist and obtained a master’s degree. He found he liked performing much better, and joined travelling tent shows and river boats.

Geer’s political views were definitely left of centre, and he became a member of the Communist Party of the United States in 1934. In the 1930s, he toured work camps, performing songs with Woody Guthrie and Burl Ives. He worked on several leftist documentaries, including the well-received Men and Dust (1940), written and produced by photographer and filmmaker Sheldon Dick. While working at the Tony Pastor Theater in New York, he met gay activist Harry Hay and they became lovers while Geer was married to actress Herta Ware (1917-2005). Geer was married to Ware from 1934 to 1950 and they had three children: Kate Geer, Thad Geer, and actress Ellen Geer. Although they had divorced, they remained close until his death.

Geer’s involvement in communist and socialist organizations and activities got him blacklisted in the early 1950s. As a result, he appeared in very few films during that time. He did appear in Salt of the Earth (1954), written, produced, directed, and starring blacklisted Hollywood people. The film was a story about a miners’ strike in New Mexico told from a pro-union standpoint. The film was declared subversive, which resulted in difficulties in production and distribution. He founded the Theatricum Botanicum in Topanga, California in 1951. He incorporated his love of botany with theatre by making sure every plant mentioned in Shakespeare’s plays was grown there. He worked on Broadway and, for several seasons, at the American Shakespeare Festival in Stratford, Connecticut. In 1964, he was nominated for a Tony Award for his role 110 in the Shade.

He had roles in a number of popular films, over the years, and worked with many well-known actors: Broken Arrow (1950) and Winchester 73 (1950) with James Stewart; Advise and Consent (1962) with Henry Fonda and Charles Laughton; Jeremiah Johnson (1972) with Robert Redford; and the Canadian film The Rowdyman (1972) with Gordon Pinsent.

His television appearances from the 1960s to the 1970s were numerous. His credits include: the westerns Gunsmoke, Bonanza, Alias Smith and Jones, and Cade’s County; espionage shows Mission Impossible and I Spy; and many other popular TV shows. However, he is most remembered for his role as Grandpa Walton, co-starring with longtime friend Ellen Corby as Grandma Walton. He was nominated for two Golden Globe awards and won a Prime Time Emmy for his role on The Waltons.

Will Geer died of respiratory failure on April 22, 1978. His family and friends had gathered at his side and sung “This Land is Your Land” and recited Robert Frost poems. His body was cremated and his ashes interred on the grounds of his Theatricum Botanicum in Topanga, California.