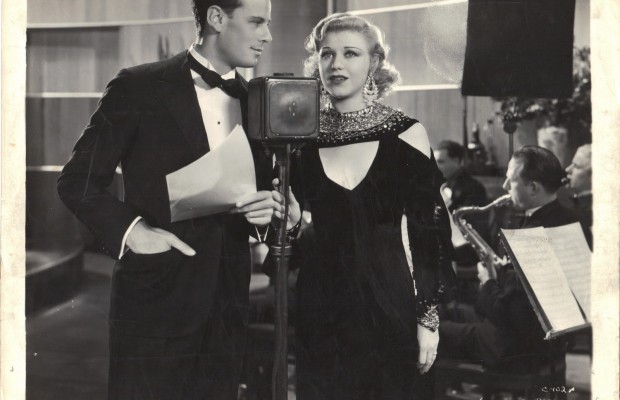 Toronto Film Society presented Professional Sweetheart (1933) on Monday, May 2, 1977 in a double bill with The Member of the Wedding as part of the Season 29 Monday Evening Film Buff Series, Programme 9.  (This Land Is Mine (1943) was substituted for the evening’s screening on short notice)

Radio’s sacred cows, the sponsors of commercial broadcasts and the entertainers featured therein, are taken for a midsummer’s sleigh ride in Professional Sweetheart, which opened yesterday at the Radio City Music Hall.  A competent cast, headed by Ginger Rogers and Norman Foster, has found much that is amusing in the industry to which Radio City was dedicated.

Glory Eden, the Purity Girl of the Ippsie-Wipsie Radio-Hour sponsored by Ipswich, the wash-cloth king, seethes inwardly and outwardly at having to be the nation’s radio sweetheart twenty-four hours a day.  She wants to smoke, drink and sow a few wild oats in Harlem.  Instead, shemust be sweetness personified, drink certified milk and forswear all knowledge of the facts of life.

Ipswich, who is always “thinking of t he product”, takes his yes-men into council and decides finally to let Glory have a romance. Jim Davey–one of the Kentucky hills Daveys–is selected from among the writers of Glory’s fan mail as the sweetheart-to-be.  Their romance is plotted by publicity men and their wedding ceremony is broadcast….

Miss Rogers has rarely been more entertaining, and Norman Foster is a properly open-minded, radio-struck mountaineer.  Gregory Ratoff as Ipswich; Frank McHugh and Franklin Pangborn as his assistants; ZaSu Pitts as a sob-sister; Edgar Kennedy as Kelcey, and Allen Jenkins and Lucien Littlefield complete a cast which brought grins and chuckles from an amused audience yesterday.

RKO Radio, which sponsored the picture, merits a vote of thanks for an entertaining comedy.

NOTE:  This film marked the only time that Ginger Rogers’ singing voice was dubbed on screen.  It was dubbed by Etta Moten.