Quackser Fortune Has A Cousin In The Bronx (1970)

The Toronto Film Society presented Quackser Fortune Has A Cousin In The Bronx (1970) on Sunday, March 13, 2011 in a double bill with St. Martin’s Lane, as part of the Season 64 Sunday Afternoon Film Buffs Series, Programme 6.

This film, about an unconventional young working class man in Dublin, was filmed entirely on location. Its hero is a nonconformist who cannot read or write. He has created a job for himself as a fertilizer-seller, but finds his work threatened when the city of Dublin bans horse-drawn wagons. As he struggles to cope with this new reality, his life is complicated by a surprising relationship with a beautiful American university student. The film was nominated for Best Comedy Written Directly for the Screen at the Writers Guild of America, USA in 1971.

GENE WILDER is not even remotely Irish, yet he makes a very believable Quackser. He was born Jerome Silberman in 1933, in Milwaukee, Wisconsin. He says he picked the name “Gene Wilder” because he couldn’t see a “Jerry Silberman” playing Hamlet. He now admits that he can’t see Gene Wilder playing Hamlet, either. But in the early days, before he worked with Mel Brooks, he was regarded as a dramatic actor rather than a comic one.

Gene Wilder Wilder served with the U.S. Army as a medic in the 1950s. He was assigned to the Department of Psychiatry and Neurology and worked extensively with psychiatric patients. He used that firsthand knowledge in 1963, when he performed on Broadway with Kirk Douglas in One Flew Over the Cuckoo’s Nest, playing a psychiatric patient himself. A production of Mother Courage and Her Children the same year altered the course of his life and career. Anne Bancroft was also in the cast, and through her he met Mel Brooks, which eventually led to Wilder’s becoming part of Brooks’ comic stock company.

His film debut came with Bonnie and Clyde (1967). Wilder won great reviews playing a terrified young undertaker abducted by the bank robbers. His performance as frantic Leo Bloom in The Producers (1968) started the celebrated collaboration with Mel Brooks. It also brought Wilder an Academy Award nomination as Best Supporting Actor. Apart from Brooks, Wilder played a comic swashbuckler in Start the Revolution Without Me (1970), a mysterious candy impresario in Willy Wonka and the Chocolate Factory (1971) and a sheep-smitten doctor in Woody Allen’s Everything You Always Wanted to Know about Sex* but Were Afraid to Ask (1972). (“That’s not an easy task, being in bed with a sheep, especially if you make the sheep nervous,” he remarked at the time). He reunited with Mel Brooks in 1974, starring in the broad comedy Blazing Saddles. The two found they shared the same comic sensibility: “We are not interested in polite titters, we want the audience rolling on the floor and falling about.” The same year they co-wrote and Wilder starred in Young Frankenstein, an exquisitely realized parody/homage. It won him a second Oscar nomination, this time for Best Adapted Screenplay.

Wilder co-starred Richard Pryor in four films, the very successful Silver Streak (1977), Stir Crazy (1980), See No Evil, Hear No Evil (1989) and Another You (1991). The last film was a big flop, with Pryor’s deterioration from multiple sclerosis clearly noticeable. Wilder has not made any more feature films since.

He married comedienne Gilda Radner in 1984, a happy union curtailed by her early death from cancer in 1989. Following her death, Wilder co-founded Gilda’s Club, a support group to raise awareness of cancer. He remarried in 1991. Wilder published a memoir in 2005, and has since published two novels and a collection of stories. His military experiences with war’s tragic aftermath made him a committed pacifist. He was staunchly against the Vietnam War, and he currently opposes the war in Iraq. In an interview aired on Turner Classic Movie in 2008, Wilder said he has retired from acting for good. “I don’t like show business, I realized. I like show, but I don’t like the business.” 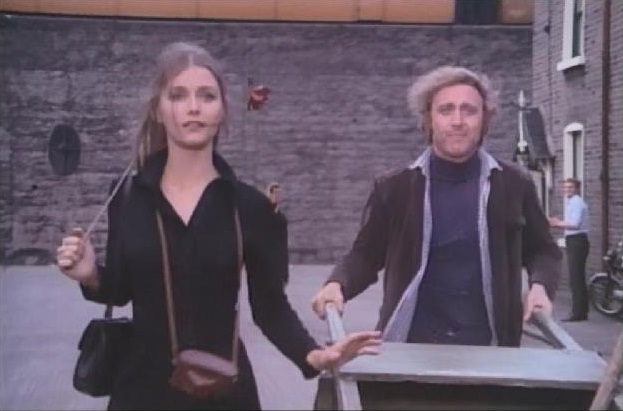 Margot Kidder In 1996, tabloid headlines broke dramatic news: Superman’s Lois Lane, MARGOT KIDDER, was found by police in a distressed state, hiding in a stranger’s garden. Terrified, she claimed she’d been stalked and attacked. She was barely recognizable, having cut her hair off with a razor blade and removed her dental work. Kidder was placed in psychiatric care while the authorities tried to sort it all out.

Margot’s troubles were not new; she was born with them. Originally named Margaret Ruth Kidder, she was born in Yellowknife in 1948, the daughter of a mining engineer. Her family moved frequently – she attended 11 schools in 12 years – but even their unsettled lifestyle could not account for Margot’s erratic emotional state. She had severe, inexplicable mood swings. Occasionally she tried to kill herself – the first time at age 14 – but the next day she would feel fine. In an attempt to help Margot with her troubles, her parents sent her to a boarding school. She caught the acting bug while there, playing the lead in “Romeo and Juliet.”

After graduation Margot moved to Los Angeles in hope of a film career. First came Norman Jewison’s Gaily, Gaily (1969), which led to her starring role in Quackser Fortune (1970). After some harsh words from the film’s director, Margot left films to study acting in New York. Following her return to Los Angeles, she made a string of successful pictures, beginning with Brian de Palma’s Sisters (1973) and culminating in the huge hit Superman (1978) and its sequels. Despite her success, extreme mood swings continued to plague her. By then the problem had been identified – she suffered from manic depression, or “bipolar disorder.” (Kidder refers to her condition as “my monsters.”)

She married and divorced three times, and has a daughter. In 1990 a serious car accident led to bankruptcy. While delving into her past, preparing to write her autobiography, in 1996, her “monsters” returned and she became increasingly paranoid. This led to the infamous episode in the garden, covered in excruciating detail by the press and visually documented by the paparazzi – what she now refers to as “the biggest nervous breakdown in history, bar possibly Vivien Leigh’s.”

She got back on her feet and began a mental wellness campaign. “I’ll tell you, being pretty crazy while being chased by the National Enquirer is not good,” she later said. “The British tabloids were the worst. But you take the cards you’re dealt, and I got better. I’m now ferociously healthy in body and mind. You couldn’t pay me to go near a psychiatrist again. Stopping seeing them was my first step to getting well.” Kidder has resumed her career in film, television, and theatre, though she comments that “Acting’s fun, but life’s more important.” In 2007, Kidder said she had not had a manic episode in 11 years. “I guess I came to terms with my demons. Or else I’d be in big trouble, wouldn’t I? Horrifying as it was to crack up in the public eye, it made me look at myself and fix it.” All in all, though, she advises “If you’re gonna fall apart, do it in your own bedroom.”

For someone who has been plagued by so much instability, Kidder now sounds very level-headed about being a modern-day celebrity: “Suppose that you want to be famous and suddenly it happens and you don’t like it – it’s nobody’s fault but your own.” Once resentful of being typecast as Lois Lane, she now finds that playing Superman’s friend has its perks: “My grandson sees me as Lois on TV every Christmas, and that scores me points.”