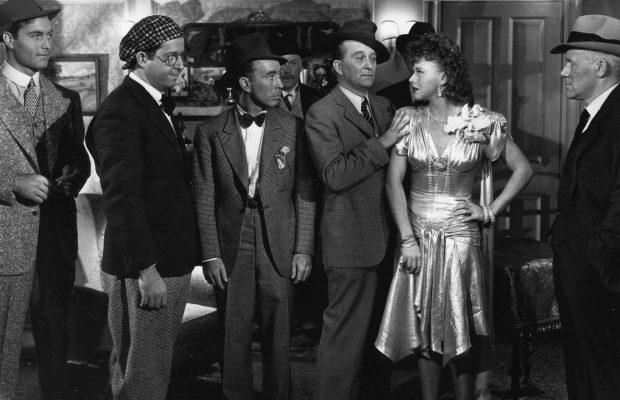 Toronto Film Society presented Roxie Hart (1942) on Monday, February 21, 2012 in a double bill with The Adventuress as part of the Season 64 Monday Evening Film Buffs, Programme 5.

The low-down story of a high-class gal! – original advertising tagline

Throughout the Jazz Age, the tabloid press thrived, its “yellow journalism” aided by advances in photographic reproduction. Lurid coverage of prominent trials – complete with grainy, provocative photos of those involved – sold like hotcakes. This gave rise to a phenomenon that appeals strongly to some people and has only increased with time: Fame Through Notoriety. The origins of this film are two sensational trials from 1924. Roxie Hart and Velma Wall are based on Beulah Annan and Belva Gaertner, two Chicago women who each murdered their lovers. Both women stood trial, in separate cases, and both were acquitted. The real-life Billy Flynn was prominent Chicago shyster lawyer, W.W. O’Brien. Playwright Maurine Dallas Watkins covered both trials as a reporter for the Chicago Tribune, then adapted them into the play Chicago. The play opened on Broadway in 1926, directed by George Abbott. A silent film version of Chicago was made in 1927, with Eugene Pallette as the victim. Revived as Roxie Hart for the 1940s, the story had to be changed somewhat to placate the then-all-powerful strictures of the Hays Code. For a more faithful version of the original plot, see either the silent version from 1927 or 2002’s Oscar-winning musical version, Chicago. 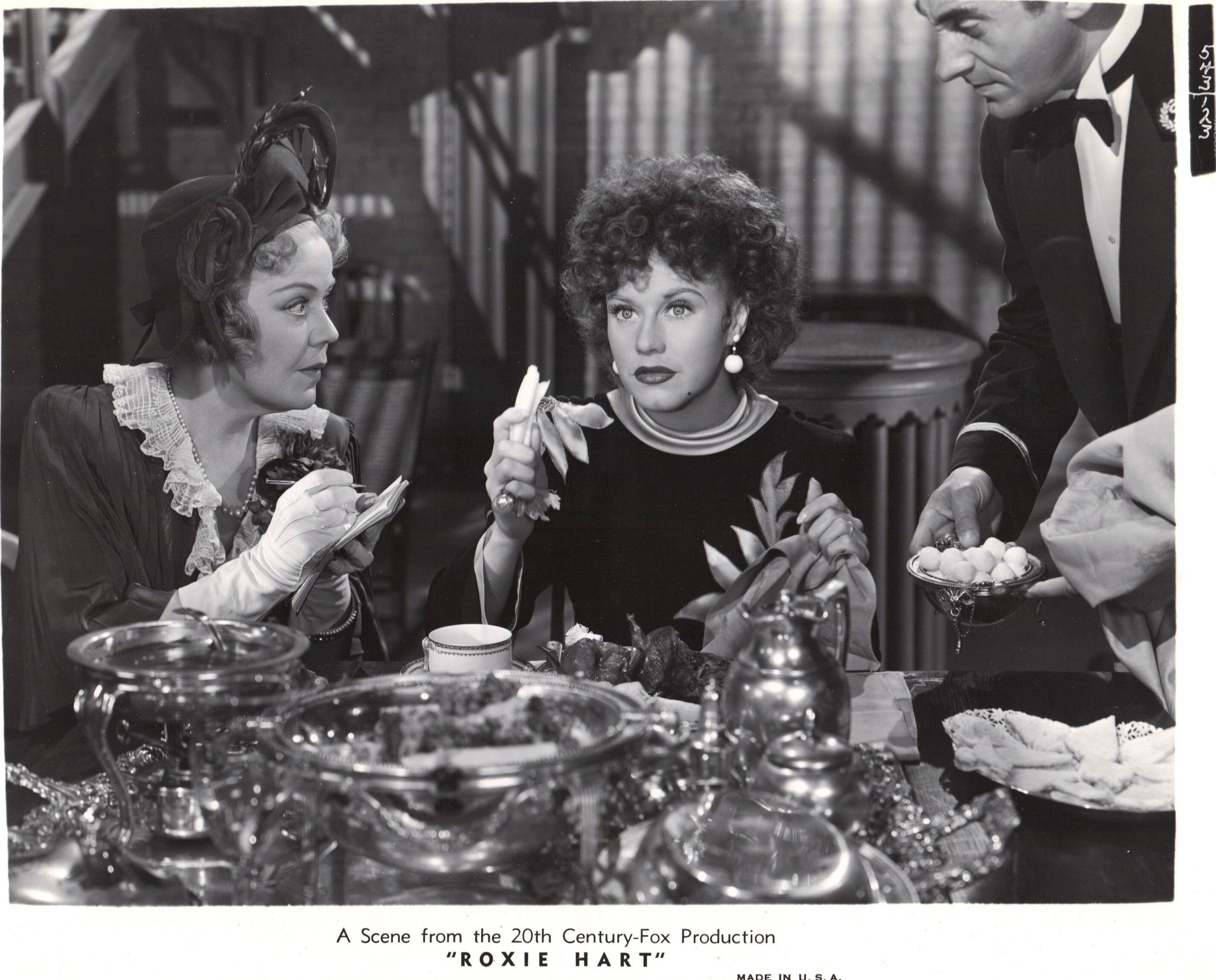 Ace director WILLIAM WELLMAN was called “Wild Bill,” a nickname that was no exaggeration. Throughout his entire life, Wellman had great difficulty behaving himself. This made him very few friends among the Hollywood establishment, and may have been why he never won an Oscar as Best Director. Though powerful Hollywood elites respected him as a director, they had very little regard for him as an individual. Louis B. Mayer’s daughter Irene Mayer Selznick, the first wife of David O. Selznick, summed Wellman up as “a terror, a shoot-up-the-town fellow, trying to be a great big masculine I-don’t-know-what.”

He was a leap year’s baby, born February 29, 1896 into an old Massachusetts family. His Irish-born mother, Cecilia McCarthy Wellman, “was such a successful probation officer that she was asked to speak to Congress about juvenile delinquency,” he recalled years later. “She told them that of all the thousands of boys she’d worked with, the only one she couldn’t control was her own son!” Bill excelled as an athlete, and particularly enjoyed ice hockey, but he also enjoyed joy-riding in stolen cars at night (“We always brought them back.”). After many infractions, Wellman was finally expelled from high school for dropping a stink bomb on the principal’s head. “When I got kicked out of high school, I had to report to the probation officer of the city of Newton for six months – who was my own mother.”

Restless Bill wanted to be an aviator, and World War I offered him the opportunity. After joining the air wing of the French Foreign Legion, he became a fighter pilot. Flying with the Lafayette Flying Corps, the nickname “Wild Bill” summed up his reckless but effective style. After being shot down, he received a medical discharge and returned to the United States. Wellman had a pronounced limp for the rest of his life and often used it to his advantage, exaggerating it when he met a pretty girl. In 1918 he published a book about his exploits at the front called “Go Get ‘Em!” Then he joined the United States Army Air Service and taught combat tactics to new pilots in San Diego.

While there, Wellman often flew up to Hollywood for the weekends, using his friend Douglas Fairbanks’ polo field in Bel Air as a landing strip. Fairbanks was fascinated with Bill’s true-life adventures and thought his handsome, athletic friend should be in the movies. At Fairbanks’ insistence, Wellman became an actor, playing the juvenile lead in The Knickerbocker Buckaroo (1919). His acting career was brief, due – true to form – to misbehaviour. Director Raoul Walsh fired Wellman from the film Evangeline (1919) after he slapped the leading lady, Miriam Cooper – not knowing this actress was also the wife of Raoul Walsh.

Wellman decided he hated actors and detested acting, and that he wanted to be a director instead. Again, loyal pal Fairbanks helped him out. Bill was soon learning the ropes, first directing low-budget silent westerns. He won a prized assignment, directing the WWI flying epic Wings (1927), because of his fighter pilot background. The massive production went well over budget and over schedule, and Wellman was nearly fired more than once. When released, it became one of the most successful silent pictures ever. It also provided Paramount Studios with a major player who would serve them well for decades. Wellman cast bit player Gary Cooper in a small but riveting role and the tiny part made him a star. Though Wings became the first Academy Award-winning Best Picture, Paramount did not keep troublesome Bill under contract.

He moved on to Warner Brothers, and some of his best work is evident in the string of hard-hitting, cheaply-made pictures he made there in the early 1930s. His rapid shooting style was an asset: “I’m the best goddamn two-take director in the business. One for the take I wanted, one in case something went wrong in the lab. Overshooting is asking for trouble.” These tough, lurid, surprisingly violent films include Other Men’s Women and Night Nurse (1931), Frisco Jenny (1932) Midnight Mary and Heroes for Sale (1933). One of them, The Public Enemy (1931) created a sensation. It made James Cagney a star and set a new, more modern tone in movies. “When I made The Public Enemy, I was way ahead in thinking,” he later recalled. “No love story, but loaded with sex and violence.”

While working on these films at Warner Brothers, he met his fourth (and final) wife, Dorothy Coonan. She was a dancer and actress who had worked unbilled in several films, including The Broadway Melody (1929) and Palmy Days (1931). After working as one of the Goldwyn Girls, she signed on with Busby Berkeley, becoming one of his core group of closely-choreographed chorines. Though unbilled, Dorothy was prominently featured in glamorous close- ups in 42nd Street (1933) and Gold Diggers of 1933. Wellman was instantly attracted when he met her on the lot, but Dorothy refused to date him because he was a married man. When he told her he was just waiting out the year until his divorce decree was final, she replied, “Come back then.” He did so, and – despite his dreadful marital track record – they were soon Mr. and Mrs. Wellman.

Wellman was interested in Dorothy for more than just marriage. Glamour girls were a dime a dozen in Hollywood, but Dorothy had something special: she was very beautiful with makeup, but without any makeup at all she was even more appealing – freckle-faced, very young and quite adorable. He cast her in a lead role as Sally, the spunky, sweet tomboy teenager riding the rails in his landmark Depression film, Wild Boys of the Road (1933). This was her only credited role, and the first time a character she played had a name. She then retired to raise their large family (the Wellmans had seven children). Years later, Bill gave her an uncredited role in The Story of G.I. Joe (1945), playing army nurse “Red” Murphy. Dorothy was tough enough to stand up to him, and their marriage worked. He credited his “Dottie” with saving him from “a life of self-destruction” and from becoming a caricature of himself.

Wellman was a versatile director, who made a wide variety of films, from macho war movies to “women’s pictures” to sharply-observed comedies. He was very good at examining the various aspects of fame, and his comedies on the subject were dark ones. A Star Is Born (1937) and the biting satire Nothing Sacred (1937) were vivid dissections of the subject, as was Roxie Hart (which reclusive director Stanley Kubrick once named as one of his 10 favourite films). Wellman’s 83 films included several now considered classics, including the first version of A Star Is Born (1937) – for which he won his only Oscar, for Best Original Story – Beau Geste (1939), The Ox-Bow Incident (1943), Lady of Burlesque (1943) and Battleground (1949). He retired after making Lafayette Escadrille in 1958. The film meant a great deal to him – he produced, directed, wrote the story and narrated it – and he was so infuriated by the studio’s post-production tampering with it that he quit for good.

He was nominated as Best Director three times, for A Star Is Born, Battleground and The High and the Mighty (1954), but never won. If he cared, he never said so. He was critical of his career: “Frankly, if you examine my whole background, it’s not very good. I can tell you that for every good picture, I made at least five or six stinkers.” The Directors Guild of America disagreed, and they presented him with a Lifetime Achievement Award in 1973. The Film Academy has not done so, likely because Wellman was truly unpopular in Hollywood. Actors he worked with hated him for his bullying. For the most part, he hated them right back, considering acting a sissy profession. “I couldn’t stand being an actor,” he said. “I haven’t liked many actors anyway, and I’ve directed most of them. One of my sons is an actor and it breaks my heart, but there’s nothing I can do about it.” One notable exception was Robert Taylor, who worked with Wellman on Small Town Girl (1936) and Westward the Women (1951). “I have never gotten along with actors but I was crazy about Bob Taylor. I think he’s one of the finest men I’ve ever known… I had no trouble with him at all. He was wonderful.” He also admired Ray Milland, despite Milland being British: “Milland is one of the toughest guys I’ve ever known in my life, believe it or not. He is an Englishman, you know, but he is a rugged guy. If I got into any trouble, I’d be glad to have Milland with me.”

In 1974, he told an interviewer “I’m very happy. I’m seventy-eight years old, I’ve got a lovely wife – we’ve been married for forty years. She was only nineteen, and for a while I thought they were going to put me away for kidnapping! We’ve got twelve grandchildren and she, personally, was a magician. She gave me a girl, boy, girl, boy, girl, boy, girl. Now, that’s calling your shots! And on top of all that, she house-broke me. The only disappointing thing about her to me is how the hell she could stand me for forty years; it hasn’t been easy.” Dorothy and Bill were married for 42 years, until his death from leukemia in 1975. As he wished, Wellman’s ashes were scattered from an airplane into the clouds and sky he loved.

Dorothy Coonan Wellman, the last of the Busby Berkeley dancers, died at 95 in 2009. Brief clips from her film appearances and home movies of the Wellmans can be viewed in the online memorial her family members created, at http://vimeo.com/6660885