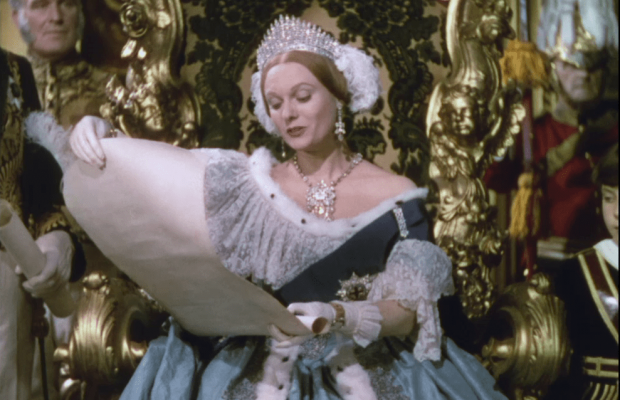 Toronto Film Society presented Sixty Glorious Years (1938) on Monday, July 9, 2020 in a double bill with Folly to Be Wise as part of the Season 65 Summer Series, Programme 1.

It seems slightly absurd now, but prior to 1937 any depictions of Queen Victoria on the British stage or screen were strictly and absolutely forbidden. The monarchy was then a much more aloof and secretive entity – still clinging to many of the values Victoria herself had instilled during her long reign – and press and public respectfully kept their distance. But all that changed suddenly in December, 1936. The royal family was deeply shaken by the abdication of the new king, Edward VIII. Aware that they needed to move swiftly to overcome bad publicity and offset the scandal, the royals made concerted efforts to connect with the people. Among their efforts was dropping the ban on depictions of Queen Victoria. This allowed the making of a very laudatory film, Victoria the Great (1937) which starred Anna Neagle and Anton Walbrook as Victoria and Albert. The movie was an enormous success – so much so that its producer/director, Herbert Wilcox, immediately remade it with the same cast, in Technicolor (very expensive in those days), featuring different incidents, as Sixty Glorious Years (1938). For this colour remake, the royal family granted the film-makers unprecedented access to their very private homes. They allowed exteriors to be shot on the actual locations at Balmoral, Windsor Castle, Osborne House and Buckingham Palace, making this film a unique sort of travelogue, as well as historical drama.

ANNA NEAGLE led a life that sounds like a rags-to-riches movie plot. She was born Florence Marjorie Robertson in a working-class district of London, became a phenomenally popular movie star and wound up a highly respected Dame Commander of the British Empire. In the years following WWII, she was named England’s favourite actress for seven straight years (a record – no one else has ever come close). She excelled at portraying tasteful, ladylike heroines and her films ranged from musical comedies to historical costume dramas. Though Neagle was never a critical favourite, she was very appealing, and the British public adored her. The romance of her private life was appealing, too. Producer/director Herbert Wilcox met her by chance in 1931, fell in love with her and subsequently made almost all her movies. Theirs was one of the most successful partnerships ever in British cinema. After working together for 12 years, they finally married in 1943 and remained together until his death in 1977.

Neagle and Wilcox scored their first big hit with Nell Gwynne (1934), the sort of romantic historical costume drama that became their specialty. 1937 and 1938 saw the back-to-back releases of Victoria the Great and Sixty Glorious Years, and Neagle became firmly associated with Queen Victoria. This intensified during the war years; in the interest of drumming up patriotism for the war effort, half of the first film and half of the second one were spliced together and reissued under the title Queen Victoria. Again, Neagle’s depiction of Victoria was a runaway hit. In 1939, as World War II heated up, Wilcox and Neagle followed her portrayals of Victoria with the true story of a famous British World War I heroine Nurse Edith Cavell (infamously executed by a German firing squad as an enemy agent in 1915). She and Wilcox visited the United States in 1940. They made three Hollywood musicals, including Irene (1940) with Ray Milland, before returning to Britain. Though she made many romances and musicals, biographies of inspiring true-life heroines remained Neagle’s forte. She portrayed famed 1930s British aviatrix Amy Johnson in They Flew Alone (1942), brave WWII heroine Odette (1950) and nursing legend Florence Nightingale in The Lady with the Lamp (1951). Tastes changed as the 1950s wore on, and there were fewer parts for genteel, gracious ladies onscreen. Undeterred, Neagle retired from films to concentrate on stage. She worked steadily until the onset of Parkinson’s disease finally slowed her down in the 1980s. Our own TFS member emeritus Ed Jull has fond memories of Anna Neagle’s visit to his basement here in Toronto for one of his informal 16-mm movie nights. He met her by chance at an event when she was here in town, invited her to join the group for movie night in Rosedale and was very pleased when she attended. Dame Anna Neagle died in 1986, aged 81. 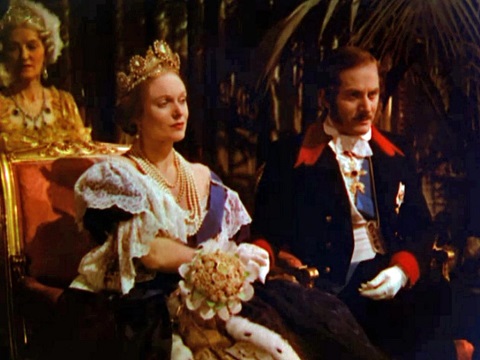 Handsome, intense leading man ANTON WALBROOK was born Adolf Anton Wilhelm Wohlbrück in Vienna, into a family of circus clowns. Though he enjoyed performing, Anton had no interest in joining the circus. Instead, he went to Germany and trained to be an actor with legendary director Max Reinhardt. He made several films in Germany, including Viktor und Viktoria (1933) – remade in England as the Jessie Matthews film First a Girl (1935) and then as the Julie Andrews musical Victor/Victoria (1982). (In the German original, Walbrook played the James Garner/leading man part.) Though he was a successful young actor, trouble loomed. Under the Nazi-era Nuremberg laws, Walbrook was classified as half-Jewish. To avoid persecution, he moved to England and successfully switched to acting in English language films.

He was an ideal choice to play Prince Albert in Victoria the Great (1937) and its various re-workings. He went on to star in the original British version of Gaslight (1940), playing the Charles Boyer/nasty husband role. For the Powell and Pressburger team he played a pacifist Hutterite leader in 49th Parallel (1941) and the dashing “good German” in The Life and Death of Colonel Blimp (1943). His best-known role was as tyrannical impresario Lermontov in The Red Shoes (1948). Red Shoes co-star Moira Shearer recalled Walbrook as a loner on the set, who wore dark glasses and always ate alone. Walbrook retired from films at the end of the 1950s, but continued to act on the European stage and on television. He never married. After his death in Germany in 1967, Walbrook’s ashes were taken back to England and buried in a London churchyard.