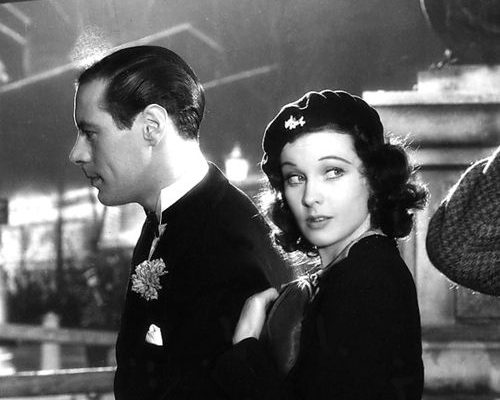 The Toronto Film Society presented St. Martin’s Lane (1938) on Sunday, March 13, 2011 in a double bill with Quackser Fortune Has A Cousin In The Bronx, as part of the Season 64 Sunday Afternoon Film Buffs Series, Programme 6.

The name of this film was changed to Sidewalks of London for audiences in the United States, because few of them would know London’s St. Martin’s Lane and what it signified. The actual St. Martin’s Lane is a narrow street on the edge of Covent Garden in central London, home to the English National Opera, the Coliseum Theatre and other smaller theatres. Historically, this has been a street where enterprising buskers put on street performances for opera and theatre-goers.

Sidewalks of London inspired an American musical, Busker Alley with a score by the Sherman Brothers (who wrote the music for Mary Poppins and The Jungle Book, among other films). Since the 1960s, several attempts have been made to take Busker Alley to Broadway, but due to many misadventures and misfortunes it has never gotten further than a pre-Broadway national tour starring dancer Tommy Tune in 1995.

Larry Adler This is one of harmonica virtuoso LARRY ADLER’s rare movies. Though an American, he always felt a greater kinship with the British. He first performed in the UK in 1934, to great acclaim. Larry Adler fan clubs formed around the UK and harmonica sales shot up. Eventually blacklisted in the United States for his left-wing views, he moved to London in 1949, remarking that “England has a sense of justice and fair play that I hope will one day become prevalent in America, as well.” He remained in England for the rest of his life.

Tyrone Guthrie as a young man. William TYRONE GUTHRIE is renowned in the theatre, but this is one of only two movies he ever appeared in (the other is Charles Laughton’s The Beachcomber, made the same year). He came from a theatrical family, and “Tyrone” was very much a family name. His great-grandfather was the Irish actor and author Tyrone Power I, he was the nephew of Broadway actor Tyrone Power (II) and a first cousin of Hollywood star Tyrone Power. In addition to his extensive work in the theatre, Guthrie was one of British television’s pioneers, directing two TV plays in 1938.

In 1953, Guthrie was invited to help launch the Stratford Festival of Canada. He enlisted Tanya Moiseiwitsch to design the thrust stage, and actors Alec Guinness and Irene Worth to star in the festival’s inaugural production of Richard III. He remained as Artistic Director for three seasons, and his work at Stratford had a strong influence in the development of Canadian theatre. He was knighted in 1961 for his services to drama. In 1963, he founded the Guthrie Theater in Minneapolis, Minnesota.

Tyrone Guthrie Guthrie stood 6’4” tall, and was often irked by the attention it brought: “Women to whom one has just been introduced think that it breaks the ice if they scream, ‘Goodness, you’re tall!’ How would they like it if I broke the ice first, by screaming ‘Goodness, what thick ankles!’ or ‘Goodness, what a bust!’

One of the most celebrated and prolific actors of his era, CHARLES LAUGHTON was well aware of his shortcomings – “I have a face like the behind of an elephant.” Though he could never be a handsome leading man, he became a formidable character actor, screenwriter, producer and director. Laughton also loved teaching drama, whether in formal classroom settings with promising newcomers, or in more impromptu places with actors no one really expected much of. As Ava Gardner recalled, “He was the only one in all my film years who took the time and went out of his way to try and make an actress out of me,” coaching her during breaks in filming 1949’s The Bribe. He saw great potential in Shelley Winters – then considered merely another blonde sexpot – and cast her against type as a naive, doomed young mother in the only film he ever directed, 1955’s Night of the Hunter. Though she later became a devout Method actress, Winters regarded him as her greatest teacher (and his confidence in her was not misplaced; she went on to win two Oscars). Her Night of the Hunter co-star, Robert Mitchum, stated that Laughton was the best director he ever worked for. Mitchum helped him overcome a significant problem while filming Hunter: since Laughton was uncomfortable with children, most of the film’s major scenes involving the children were actually handled by Mitchum, who had three kids of his own at home. Laughton was an astute judge of actors, greatly impressed by Gary Cooper – “In truth, that boy hasn’t the least idea how well he acts.” Like most British actors, Laughton was not a fan of the Stanislavsky Method: “Method actors give you a photograph. Real actors give you an oil painting.

Vivien Leigh This was the last picture VIVIEN LEIGH made before she was cast as Scarlett O’Hara, and some refer to it as her screen test for Gone With the Wind. Indeed, Liberty’s selfish, ruthless character is much like Scarlett’s. Despite her exquisite prettiness, Leigh was able to be much more than a pretty face, exposing a hard side and a determination most ingénues lack. She was more than beautiful – she was intriguing, intelligent and talented. Her skills won her plaudits, admirers and two Academy Awards, but her triumphs could not overcome the personal problems which finally overwhelmed her.

Leigh’s problems were not her fault, though they led to excessive misbehaviour. They were not acquired, like alcoholism or drug addiction, and they did not stem from her lifestyle. Leigh was manic depressive, plagued by an inner volatility that she could not control or fully understand. “I swing between happiness and misery and I cry easily,” she admitted. “I am part prude and part non-conformist.” She suffered greatly from it, and even more from the misdiagnoses and mistreatment meted out by doctors who sought to cure her. Sheer willpower kept her going; when Vivien was given shock therapy, she would sometimes go on stage just hours after the excruciating treatments, not missing a beat in her performance but wearing herself out in the process. In addition to her mental illness, she contracted tuberculosis in 1945, from which she never fully recovered.

Her second husband, Laurence Olivier, struggled for many years to take care of her. When she made A Streetcar Named Desire (1951), he had to accompany her to Hollywood, to ensure that her manic-depression did not get out of hand and disrupt the production. She finally reached a crisis point during the filming of Elephant Walk (1954), suffering a massive breakdown after a volatile affair with co-star Peter Finch. The press made much of it when she was replaced by Elizabeth Taylor. Olivier was finally exhausted by the hellish marriage; they divorced in 1960 and he married actress Joan Plowright.

Vivien Leigh made 19 films in all – not many for a major star of the era, but impressive when you consider the difficulties she was dealing with. Her final film was Ship of Fools (1965), playing a small part. She died at 53, after collapsing from an attack of tuberculosis on July 7, 1967. The lights of the West End theatre marquees were darkened for an hour that night in her honour.