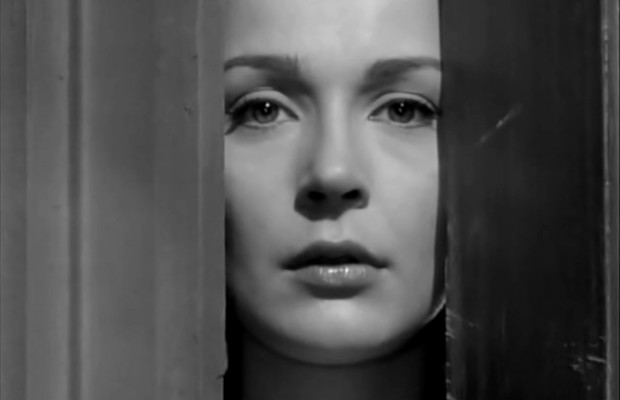 Any discussion of Underworld, U.S.A. invariably centres around its director, Samuel Fuller, unquestionably on of the most original, forceful personalities in American film history.  Born August 12, 1911, in Worcester, Massachusetts, he was a copy boy on the New York Journal at thirteen, at seventeen was the youngest crime reporter in New York.  A stint in the infantry during WWII interrupted his career of novel and movie script writing.  Fuller directed his first movie, the still memorable I Shot Jesse James, in 1948-49, and has made eighteen more features in the ensuing twenty-five years.  Underworld, U.S.A. is undoubtedly one of his finest, along with Park Row, Pickup On South Street, Merrill’s Marauders and Shock Corridor; but Forty Guns is Fuller’s enduring masterpiece, one of the most brilliant films ever made.

All of Fuller’s films are very sophisticated technically, despite their quick shooting schedules and cheap budgets. Long takes, inventive tracking shots, striking camera angles, massive close-ups, and dynamic, classical editing about in his films.  And Fuller extracted the remarkable spontaneity of performances in his movies through tricks–by changing props in the time between rehearsals and filming; by having actors not in the script walk off stage during shooting; by firing a gun–anything to elicit surprise from the actors and remove slickness.  Above all, Fuller’s films are vibrant and refreshing, certainly not graceful, but overflowing in raw, driving energy–as brutal and harsh to look at as the world they portray.

Fuller has said that what he looks for as a principle on which to organize a script is one character going from right to left and another going from left to right–‘I love conflict.’  In Underworld, U.S.A. (Fuller’s version of Dumas’ Monte Cristo), organized crime and big business are equated with the Crine Commission, with Tolly Devlin as the mid-point between the two.  Crime, in Underworld, U.S.A., is defined as lack of emotion (best represented by the cold killer, Gus, who only does his job–there is no emtion is the man at all) and a fascade of good citizenship (note Boss Connors saying, “We’ll always win.  All we have to do is pay a little taxes, go to church, send a couple of kids through school, set up a few charities on the side.  We’ll win.  We always have.  We always will.”)  And compare the Syndicate and the F.B.I. as military organizations–Phil Hardy noted that, “the two organizations are alike in every respect: each is housed in its own skyscraper above the battlefield of America.  The battle is for control of America, and more particularly for control of America’s youth.”  David Morse has written: “In Underworld, U.S.A. Fuller…retains the authenticity of individual experience, without falsifying it, while simultaneously providing an audience with a way of situating it and clarifying it.  We sympathise intensely with Tolly, yet this does not prevent us from seeing his limitations, nor does this contaminate our admiration for what he does.  In a double perspective we become implicated in the action through our identification with Tolly Devlin but are distanced from it.”

Whether by coincidence or not, Underworld, U.S.A. contains the most memorable performances of several members of the cast.  Dolores Dorn’s forlorn and downtrodden prostitute, Beatrice Kay’s surrogate mother, Richard Rust’s chilling executioner, and Robert Emhardt’s modern syndicate boss remain in memory long after the film has physically ended.