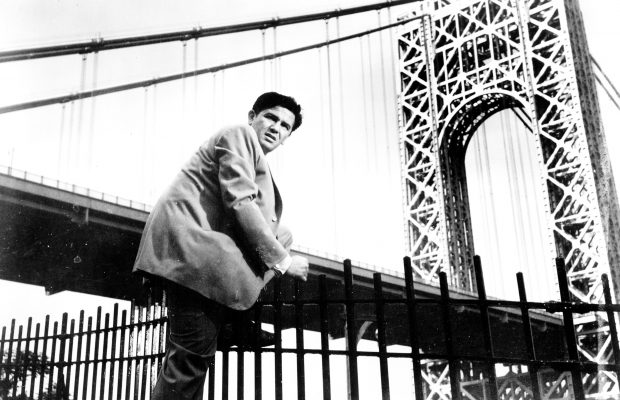 Toronto Film Society presented Force of Evil (1948) on Monday, July 29, 2019 in a double bill with Fallen Angel as part of the Season 72 Summer Series, Programme 4.

Toronto Film Society presented Force of Evil (1948) on Monday, February 25, 1974 in a double bill with The Breaking Point as part of the Season 26 Monday Buffs Series, Programme 4. 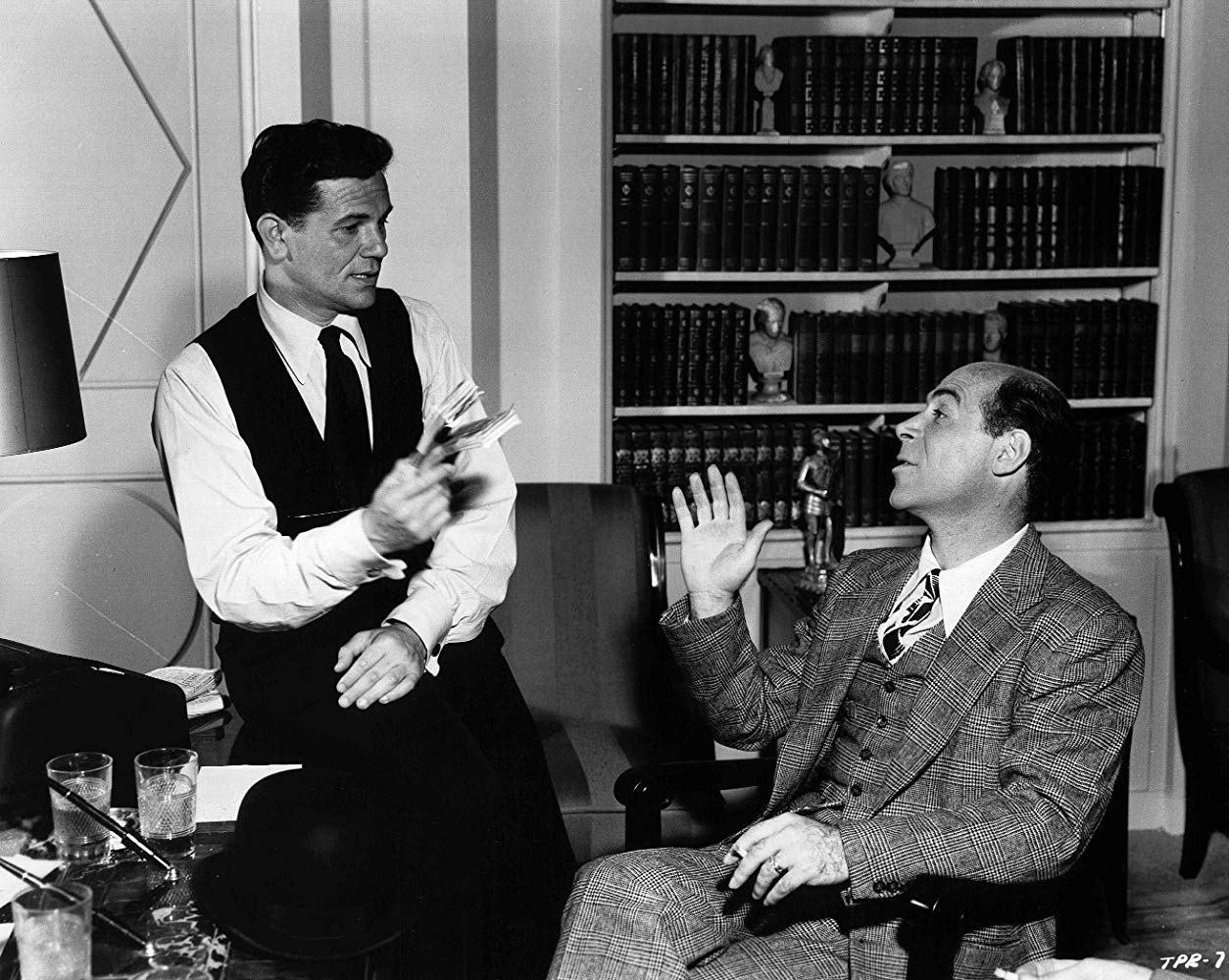 Force of Evil is considered an unusual film by 1948 standards, and it has since been canonized as a classic of film noir.  It’s a story basically concerning the world of corruption.

Director Martin Scorsese loved this film and said it influenced his own work.  Pared down to 82 minutes—or 78 by our records—it was originally closer to 90 minutes long.  Scenes involving Marie Windsor’s son, played by an eight-year-old Beau Bridges, were cut, as were those with Sheldon Leonard as a rival numbers operator, along with a framing sequence with John Garfield in the witness stand.  Why and how this footage was cut is a confusing tale; the censor board may have insisted that the scenes had to go, or the director Abraham Polonsky may have cut them of his own accord, or it may have been due to the conservativeness of those in charge at MGM who had ordered the scenes to be edited out.  Although this film was an Enterprise production, MGM was the releasing studio.

Enterprise was an independent production company co-founded in 1946 by John Garfield and producers David L. Loew and Charles Einfeld. Garfield’s contract with Warner Bros. had expired and having recently turned freelance, he wanted to continue having creative control over his own projects, as well as offering an outlet to fellow filmmakers to pursue their own humanistic advocacies through their work.  During its existence, Enterprise distributed its films through United Artists, with its last three, No Minor Vice, Force of Evil and Max Ophuls’s Caught, distributed through MGM.  After a loss of nearly two million dollars on its first five pictures—one of them being the disastrous Arch of Triumph directed by Lewis Milestone and starring Ingrid Bergman, Charles Boyer and Charles Laughton—and the studio’s original revolving credit of ten million dollars expiring in June 1948, Enterprise folded in 1949.  MGM picked up Force of Evil and released it at Christmas, a most inopportune time for this type of story.

The careers of Polonsky, Garfield and Robert Rossen, the director of Garfield’s Body and Soul, also released by Enterprise, were all seriously affected by the House Un-American Activities Committee.

Sourced from He Ran All the Way: The Life of John Garfield by Robert Nott (2003) and Wikipedia 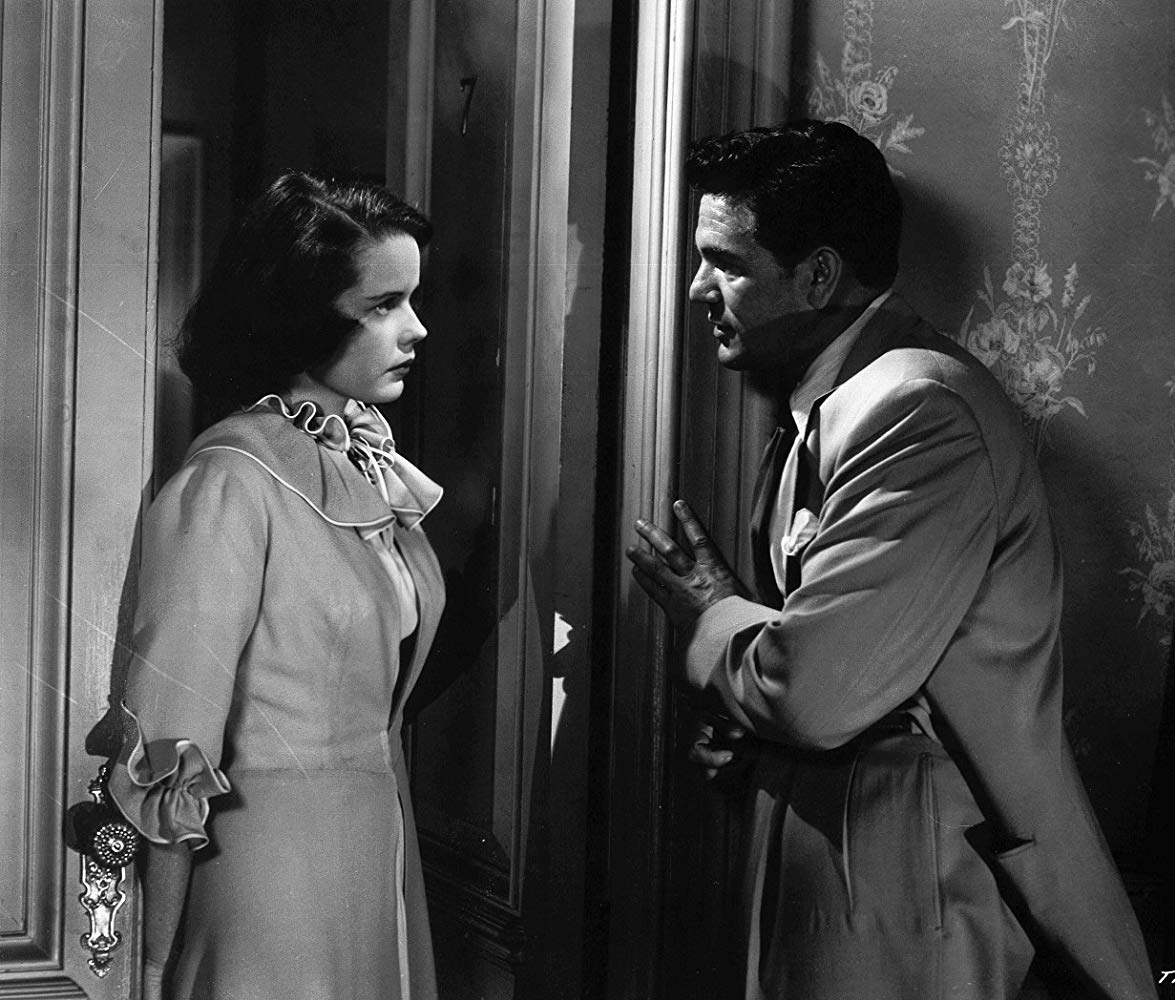 Abraham Polonsky’s Force of Evil was one of the very best of a remarkable series of outstanding first feature films by American directors in the 1940s; among them: Preston Sturges’ The Great McGinty; Orson Welles’ Citizen Kane; John Huston’s The Maltese Falcon; Nicholas Ray’s They Live by Night; Sam Fuller’s I Shot Jesse James; Billy Wilder’s The Major and the Minor; and Joseph Losey’s The Boy with Green Hair. Whereas the other directors went on to either fame or fortune, Polonsky disappeared under the blacklist inspired by his appearance before the House Un-American Activities Committee. Primarily a writer, only a couple of scripts (including one for Body and Soul) preceded Polonsky’s work on Force of Evil (a commercial failure), and only two other screenplays followed in the ensuing twenty years before he was given a chance to write and direct—Tell Them Willie Boy is Here (1969)—and then direct: Romance of a Horse Thief (1971) (a commercial disaster). With future projects dim, and his age (born 1910) against him, Polonsky’s fated career is certainly one of the most shocking examples of waste in recent film history. Some remarks by Polonsky on Force of Evil and filmmaking: “I knew the novel ‘Tucker’s People’ by Ira Wolfert and was fascinated by it. The book had a clear parallel to fascism. I mean, that’s an ordinary metaphor you find in all economic writing and in the poetry of left-wing journalism: gangsterism is like capitalism, or the other way ’round…. The great thing about success in Hollywood is that everything you say is considered potentially profitable. So, even though this was a particularly arty subject—arty for a studio film—I proposed it and they accepted it. …The technique of the whole film: unfinished polar relationships. I used the rhythmic line of the dialogue sometimes with the images, and sometimes against the images. In that Tucker scene when they are walking down the stairway, the voices are right on mike but the people are a mile away. I did that all the time. It was the style of the film. To create a sense of general anxiety. When you do a thing like that, what you do is utilize the familiar as a way of calling attention to the fact that it’s not so familiar after all.”

Even though contemporary reviews were mixed, all critics, past and present, have commented on Polonsky’s astonishing use of language. William Pechter has written: “To observe that the language of Force of Evil is beautiful in itself may not be quite to the point. The impression of that language is of—for the first time—really hearing, on the screen, the sounds of city speech, with its special repetitions and elisions, cadence and inflection, inarticulateness and crypto-poetry; much as Odets had brought it to the stage. …The image works with word. Nothing is duplicated, or supererogatory. The soundtrack is the image slantwise; refracted through an individual consciousness and, to that extent, interpreted. Throughout the film, Joe is constantly commenting upon the action, telling us not only what he and the others think, but even describing his own, overt actions as we see him engaging in them. It is this kind of awareness and volition which is alien to the conventional melodramatic hero; and it is interesting to note that it is a departure from the novel which is related in flatly omniscient third person. The effect of all this off-repetition, with its language overlapping image and language overlapping language, is finally quite different from that of the very similar devices of Hiroshima, Mon Amour. In that film, the final effect is merely rhetorical and consequently artistic; in Force of Evil, the language takes on the quality of incantation, and imparts an almost choric resonance to the Cain and Abel myth which lies at the film’s center. The more one sees Force of Evil, the closer one gets to the film’s center, the more one becomes aware of that central myth, and the formal means by which it is exposed. The language becomes a kind of insistent music, and the images move congruently with an extraordinary purity and freedom. A brief conversation is composed from a remote angle above a gracefully curving stairway; the moment exists both in and independent of the plot; and, independently, it is startlingly beautiful. Such imagery proliferates throughout the film, from the simplest of conversational exchanges to the complexly moving vision of Joe running senselessly down a deserted Wall Street at night knowing that never again will he be able to return to his ‘fine office up in the clouds.’ Force of Evil is, actually, a very impure film; it is literary and dramatic, but only insofar as the film is a literary and dramatic medium, and no further. Beneath and beyond that, there is the autonomous beauty of poetic diction; the aesthetic paradox that what is harrowing in life may be that and be also beautiful in art.”