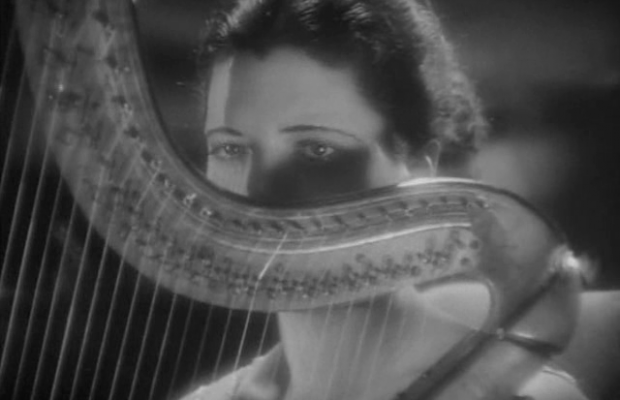 The Toronto Film Society presented Guilty Hands on Monday, September 30, 2013 in a double bill with In This Our Life, as part of the Season 66 Monday Night Film Buffs Series, Programme 1.

Paramount kept Kay Francis on loan-out while lining up new scripts for her.  She returned to the MGM lot to be second-billed to the formidable talents of Lionel Barrymore.  The picture was titled Guilty Hands and Kay held her own with the stage and screen veteran.  Woody Van Dyke directed this unusual whodunit, and Broadway playwright Bayard Veiller wrote the screenplay.

Kay’s performance in the last 30 seconds of the film is remarkable.  From the time the inspector questions her until the fade out, Kay does a fine job of registering a complexity of emotion that influences the audiences’ own feelings and conclusions about what has occurred on screen.  The LA Examiner praised her performance.  “Kay Francis is splendid as the friend of the murdered man.  It is not an easy role, but Miss Francis is always believable in the emotional fireworks.”  The New York Times was also impressed with Guilty Hands saying, “Bayard Veiller has shuffled the ingredients of the murder mystery into a fresh and arresting story…not a word is wasted.  There is an excellent scene between the murderer and the woman who has ‘discovered’ him, in which he proves to her that there is sufficient evidence to convict her of the crime…Kay Francis in this latter role plays well…W.S. Van Dyke also deserves a word for his direction…”

Kay was impressed with Van Dyke as a director and as an individual.  She wrote about him, “W.S. Van Dyke…a hard-boiled hombre…A leader of men, a soldier of fortune, he is truly adventurous in this modern, tame world.  His kindness is unexpected and so all the more potent.  Virile, dominating, he has tramped the by-paths of the world and, somehow, this seeps through.”  Kay was well aware of Van Dyke’s work for on-location filming in Tahiti (White Shadows in the South Seas) and Africa (Trader Horn).  Kay had an opportunity to work with him again at MGM in 1941.

After initially mismanaging Kay and subsequently realizing how much other studios valued her talents, Paramount finally found four films worthy of her.  These films provided an impressive exit for Kay’s departure from the studio.  In the aftermath of Warners’ raid on Paramount, little did anyone know that the BFI was keeping records on Paramount’s “Passion Flower,” Kay Francis.  Evidentially, J. Edgar Hoover had an interest in her off-screen performances and private life.

Kay Francis:  I Can’t Wait to Be Forgotten by Scott O’Brien

Although Forrester Harvey is credited onscreen as Spencer Wilson, it is Charles Crockett‘s character who is referred to as “Mr. Wilson” at one point. Harvey’s character name is never spoken in the movie.

MGM next borrowed Kay for Guilty Hands, a cleverly directed mystery by Woody Van Dyke.  It was another seductress role.  “I don’t want to be a bad woman in too many pictures in succession,” Kay complained.  “Too much glamour, too much sin, repeated often, becomes monotonously dull.  I’m speaking now about the screen, of course!”  Reviewers enjoyed the film and Kay’s performance.

Kay Francis: A Passionate Life and Career by Lynn Kear and John Rossman

Woodbridge Strong Van Dyke II was born March 21, 1889 in San Diego, California.  He was a child actor on the vaudeville circuit. His early adult years were unsettled, and he moved from career to career until arriving in Hollywood. His first movie assignment was as an assistant director on the D. W. Griffith feature motion picture Intolerance (1916). That same year he was cast as Charles Dickens in the now lost 1916 film Oliver Twist. He also was one of the assistant directors on the film. During the silent era he learned his craft and by the advent of the talkies was one of MGM‘s most reliable directors.

He came to be known as “One-Take Woody” or “One-Take Van Dyke”, for the speed with which he would complete his assignments, and although not regarded as one of the screen’s most talented directors, MGM regarded him as one of the most versatile, equally at home directing costume dramas, westerns, comedies, crime melodramas and musicals. Many of his films were huge hits and top box office in any given year. He received Academy Award for Best Director nominations for The Thin Man (1934) and San Francisco (1936). He also directed the Oscar winning classic “Eskimo/Mala the Magnificent”, in which he also has a featured acting role.

The earthquake sequence in San Francisco is considered one of the best special-effects sequences ever filmed. To help direct, Van Dyke called upon his early mentor, D.W. Griffith, who had fallen on hard times. Van Dyke was also known to hire old-time, out-of-work actors as extras; because of his loyalty he was much beloved and admired in the industry.

Van Dyke was known for allowing ad-libbing (that remained in the film) and for coaxing natural performances from his actors. He made stars of Nelson Eddy, James Stewart, Myrna Loy, Johnny Weissmuller, Maureen O’Sullivan, Eleanor Powell, Ilona Massey and Margaret O’Brien. He was often called in to work a few days (or more), uncredited, on a film that was in trouble or had gone over production schedule.

Promoted to Major prior to World War II, the patriotic Van Dyke set up a Marine Corps recruiting center in his MGM office. He was one of the first Hollywood bigwigs to advocate early U.S. involvement, and he convinced stars like Clark Gable, James Stewart, Robert Taylor and Nelson Eddy to become involved in the war effort.

Ill with cancer and a bad heart, he directed one last film: Journey for Margaret, it was a heart-rending movie that made five-year old Margaret O’Brien an overnight star.

A devout Christian Scientist, Van Dyke refused most medical care during his last years. After finishing his last film he said his goodbyes to his wife, children and studio boss Louis B. Mayer, and committed suicide on February 5, 1943 in Brentwood, Los Angeles, California. At his request, Jeanette MacDonald and Nelson Eddy both sang and officiated at his funeral.