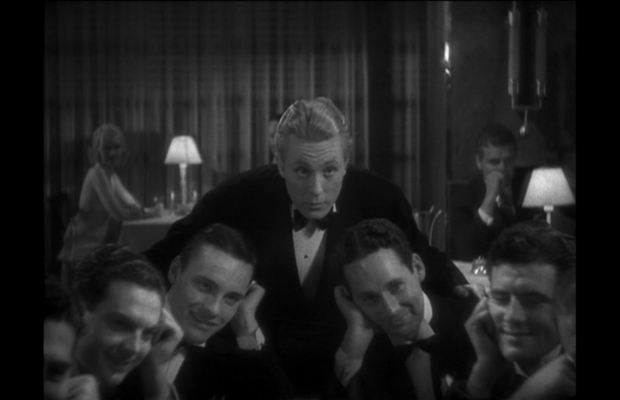 Toronto Film Society presented Hooray for Love on Sunday, December 8, 2013 in a double bill with Lady Be Good, as part of the Season 66 Sunday Afternoon Film Buff Series, Programme 3.

Robinson, partnered here with lesser-known stage dancer Jeni LeGon, and the exuberant Fats Waller.  In this film, Jeni LeGon became the only adult dancer ever to team on film with tap soloist Bill Robinson.  He danced that same year with his only other screen dance partner, Shirley Temple.  In The Little Colonel, Robinson and Shirley broke a major colour barrier when they became the first integrated screen dance team, “acceptable” only because she was a small child and he played a servant.  (For the record, multiracial adult dancing didn’t occur in Hollywood films until 1948, when Gene Kelly danced with the Nicholas Brothers in Vincent Minnelli’s The Pirate).

Young JENI LeGON was just starting out as a dancer when she made this film.  She was intimidated to be working with the great Bill Robinson, but soon found him to be an excellent, patient teacher.  She and Fats Waller met on the set and became very good friends, working together in

four more shows.  In the 1990 book Tap, LeGon recalled making Hooray for Love with him:  “Fats, he’s my dreamboat.  He’s my love.  He was very, very supportive.  He was just wonderful, and we were friends until he died.”  She also recalled that after the film was done, “I had never been to a preview before, and I didn’t know what to expect.  After Hooray for Love was shown we went out in the lobby, and the people just desceneded on me like it was no tomorrow!–asking for my autograph and congratulating me, and all that sort of business.  As I’ve said before, at that time we lived in this ‘black-and-white’ world, definitely.  But here were alal these people of the opposite race hugging and kissing me, and man, I thought they had lost their minds!  It was just glorious that all those people would stop me and talk to me that way.  It was just heavenly.”

Many Hollywood marriages blew up under the pressures of celebrity, but some flourished and endured.  One of the film colony’s most devoted couples was GENE RAYMOND and Jeanette MacDonald.  They wed with great hoopla in 1937; she was then one of MGM’s biggest stars, and theirs was the most-attended Hollywood wedding of the ’30s.  Despite the studio-orchestrated wedding’s fluff and frivolity, MacDonald and Raymond took their marriage vows very seriously.  She famously never removed her wedding ring; every day’s makeup session at the studio included putting tape and makeup over the ring to conceal it.  Though the fans may have wanted Jeanette to marry her frequent co-star Nelson Eddy, she was very much Mrs. Gene Raymond.  In 1941, Gene and Jeanette were cast opposite one another in Smilin’ Through–their only picture together, and an experience they both treasured.  (Screened by TFS at its annual GEH visit in August 2012.)

At her peak, Jeanette was a major musical star while Raymond–a fine performer, but not the most compelling or intense screen actor–remained a reliable secondary star.  MacDonald and Raymond had a great deal in common; both were successful child performers who made successful transitions into adult roles.  Gene (under his original name, Raymond Guion) was a child actor, and a Broadway veteran by 12.  At that age, lovely Jeannette was touring and competing as a singer.  Her lyric soprano voice and charming personality won contests throughout the eastern United States, which led to her first film roles at Paramount.  The couple met while both were under  contract to MGM.  In 1949, as her star status at MGM waned, he and Jeanette decided to slow their careers down.  She had a weak heart, and they opted to spend quality time together.  Jeanette left movies altogether, while Raymond became very selective about the ones he accepted.  In addition to occasional TV appearances together, the couple spent the next 14 years traveling and remained active in Hollywood society.

Jeanette’s health deteriorated, and she had an arterial transplant in 1963.  In 1965, at 61, she suffered a final heart attack and died with Gene by her side.  This brought an end to their 28-year marriage, but not to his love for her.  Every year after her death, Gene attended the Jeanette MacDonald International Fan Club convention in Los Angeles.  There he shared stories with her fans and friends–something he said he would do “till Jeanette and I are together again.”  In 1972, he recalled, “We had 28 glorious years.  Jeanette and I respected and loved each other, very deeply.  We put one another before anyone, or anything.  I am blessed to have known her, loved her and been loved by her.  Absolutely, an incredible lady!”  He married again, a union that lasted 21 years, until his wife’s death.  Raymond died at 89 in 1998.

Gene Raymond never sought major stardom and he was always very realistic about being a film star: “It isn’t really me that they admire, it’s the men I portray.  I could be the same person and drive a truck for a living and I’d go unnoticed.”