Toronto Film Society presented Madame Butterfly (1932) on Monday, March 12, 1984 in a double bill with The Women as part of the Season 36 Monday Evening  Film Buffs Series “B”, Programme 8. 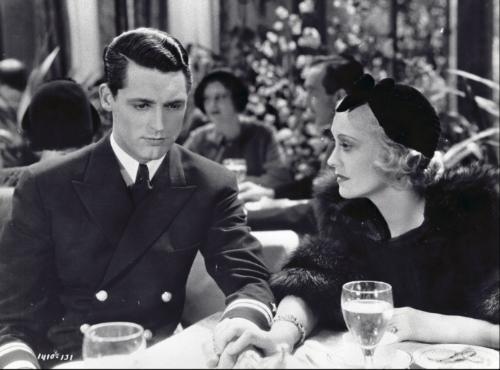 The transformation of the Puccini opera (minus lyrics) to the screen in the still quite young “talking picture” era was somewhat less than successful, both critically and from a box-office point of view.

However, viewed today, it is an interesting piece of film history, and at times a breath-taking piece of film-making.  Cinematographer David Abel gets full marks for his fine black and white photography, which is still very evident, even in the 16mm print which we present tonight.

The story is tat of Lieutenant B.F. Pinkerton of the U.S. Navy, on shore leave in Japan, meeting Cho-Cho San (Sidney) who is about to become a Geisha.  Despite a fiancee at home, Pinkerton marries Cho-Cho San, and very much Americanizes her.  Hearing what amounts to a “love ’em and leave ’em” philosophy from his friend Lieutenant Barton (Ruggles), Pinkerton leaves with the fleet, and marries “the girl back home.”

But, for three years, Cho-Cho San keeps the home as if her husband is simply away for a weekend…and in the interim bears his child.  He finally returns, with new wife in tow, is not told about the child, and fades away.  Cho-Cho San then sends her child away to her family and puts an end to her life.

Sylvia Sidney is the star of the film winning praise from reviewers in America, England and Japan itself.

Grant, in only his seventh film, and his most important role to date, comes across as a sometime caring, but still very cold individual, in a character which has been somewhat shallowly written.  He had appeared with Sidney on one other occasion, in a minor role in the 1932 production of Merrily We Go To Hell.

Reviewer Yasushi Ogino in Japan says, “As far as the workmanship is concerned, Madame Butterfly is above the common level, and all the players, particularly Sylvia Sidney, give good performances.  Settings and decors are extravagant, the famous music by Puccini is fascinating.

But, he notes, “The film was a box-office flop because the psychological developments expressed by Cho-Cho San were not accepted by the general Japanese audience.”

“After Cho-Cho recognizes the wife waiting outside, she goes inside, without any words intended to blame Pinkerton for his insincerity and treachery, and at last she commits a suicide-sequence of the weakest and silliest of the whole picture.  The Japanese women of this date (1932) regard Cho-Cho San with not so much sympathy as contempt.”

The London Times noted, “Miss Sylvia Sidney…acts with a grace and delicacy which are a great relief from this prolonged assault on our emotions.  She fits so well into the setting that all the purely Japanese parts of the film have a certain style and consistency.  But the intrusion of the American lieutenant has as disturbing an effect on the film as he had on the unfortunate Madame Butterfly.”

The New York Times also has praise for Miss Sidney, and her description of Pinkerton as “Honorable Lieutenant B.F. Pinkerton, the whole works.”

For Grant in particular, the film may have been far from “the whole works,” but the viewing of this early piece in the film career of both Grant and Sidney, in a print which retains most of the examples of the beautiful photography, provides an interesting piece of film history.