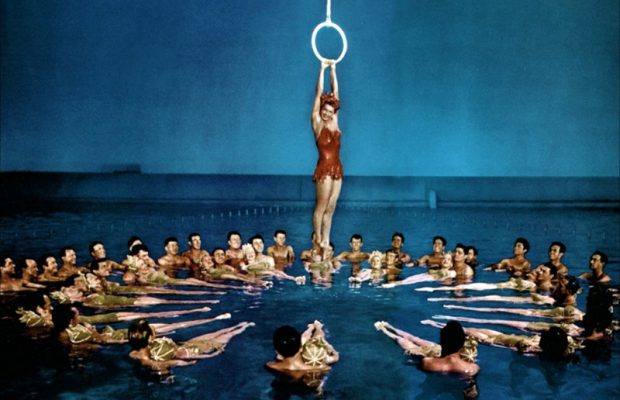 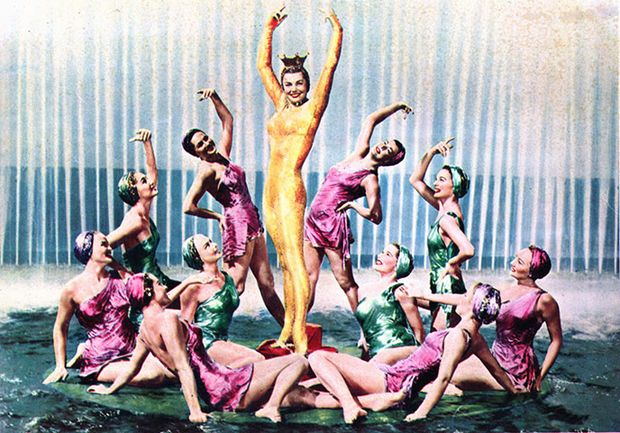 One of the reasons I chose Million Dollar Mermaid is that the production numbers really deserve to be seen on the big screen.

Esther Williams was a championship swimmer who had hopes to compete in the 1940 Olympics, but they were cancelled due to World War II.

She started her performing career in Billy Rose’s Aquacade when she was a replacement for Eleanor Holm.

Williams moved to Hollywood where her first feature film appearance was in 1942 in Andy Hardy’s Double Life. By 1944 she was starring in films such as Bathing Beauty, Thrill of a Romance and Easy to Wed. She was offered the lead role in The Opposite Sex, which was a musical remake of The Women. She refused the role, which went to June Allyson, and left MGM. There has to be more to the story because by walking away from her contract, she lost out on almost $3 million dollars in deferred contract payments she had agreed to as a tax deferral.

Even before she retired, she lent her name to a line of retro swimsuits which still exists today.

Esther William’s last appearance was in 1963 although she did reportedly turn down the role of Belle Rosen in the Poseidon Adventure, which went to Shelley Winters.

Victor Mature had been acting in films since 1939. Mostly known for his biblical epics including Samson and Delilah and The Robe. His career wound down after 1960, reportedly because he was more interested in golf than acting, but he did make the occasional appearance including roles in Neil Simon’s After the Fox, Won Ton Ton, the Dog Who Saved Hollywood and in his last role, playing Samson’s father in a TV remake of Samson and Delilah.

Annette Kellerman originally wanted Glenn Ford to play the role of Jimmy Sullivan, but Mature had recently had a big hit with Samson and Delilah.

Walter Pidgeon had the longest career of all three stars – he began in silent films in 1926 and his last role was in the Mae West movie Sextette in 1977. In between, he appeared in Mrs. Miniver, Madame Curie, Quo Vadis, The Bad and the Beautiful, Forbidden Planet and Funny Girl. 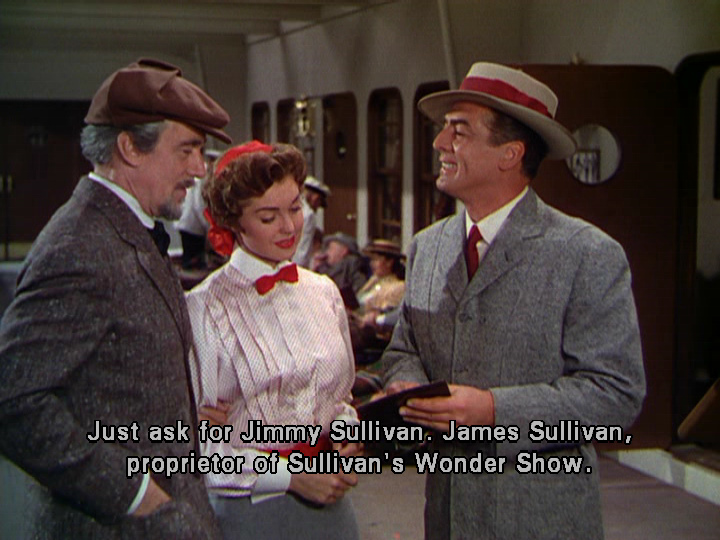 Million Dollar Mermaid is the rare Esther Williams film that actually has a good reason to have Williams in the water. A biography based on the life of Annette Kellerman, the film follows Kellerman from her childhood to the filming of the original, silent Neptune’s Daughter in 1914 (which was remade in 1949 with…Esther Williams). Kellerman had either polio or rickets as a child (sources differ), and it was suggested that swimming would help strengthen her legs. Though she’s largely forgotten today, Kellerman was a household name 100 years ago. She started as a swimming champion in Australia, but became famous when she wore a one-piece bathing suit at a Boston beach in 1907. The suit, which left her arms bare and ended above her knees, caused a scandal in an era when women would have been covered from their heads to their ankles in layers of clothing in which it would have been impossible to swim. The scandal was so famous that the movie was almost called The One Piece Suit.

The film Million Dollar Mermaid is a standard studio system bio (with some spectacular Busby Berkeley numbers included), but there were some interesting things happening behind the scenes. In her candid autobiography, “Million Dollar Mermaid”, Williams talks of Victor Mature: “He was my first leading man who really lived up to the title and it’s hard to stay away from a charismatic guy who’s constantly whispering, ‘You’re fantastic, I love you.’ One night, after doing a steamy love scene that was more than adequate foreplay, we went to my dressing room, locked the door, and unleashed our hunger; our passion for each other.” Their affair was interrupted by another incident on set: one of Busby Berkeley’s musical numbers gone awry. For this number, Williams was in a diver’s outfit made of 50,000 gold sequins, topped with a gold turban and a crown made of aluminum. The number called for her to do a swan dive from 50 feet in the air: “I hit the water with tremendous force. The impact snapped my head back. I heard something pop in my neck. I knew instantly that I was in big trouble.” She had broken three vertebrae in her neck and ended up in a full body cast for six months before resuming the film. Despite the delay, MGM could not reshoot with a replacement, as she was their only swimming star.

Interestingly, while the movie was directed by Mervyn LeRoy (Little Caesar, Gold Diggers of 1933, The Wizard of Oz, Little Women), the musical numbers were choreographed by Busby Berkeley. According to Williams, she asked LeRoy why he was directing such a light picture and he reported that he had just finished the epic Quo Vadis and needed an easy film that would be a hit. Apparently he was tired, as his direction to Williams mostly consisted of, “Now, let’s have a nice little scene.” LeRoy would go on to direct The Bad Seed, No Time for Sergeants, Gypsy, and Mr. Roberts. Busby Berkeley started as a choreographer and was known for his elaborate dance numbers featuring dozens of dancers in geometric patterns. He graduated to directing in the early-1940s, with films including: The Gang’s All Here (worth seeing for one Carmen Miranda number alone); For Me and My Gal; and Strike Up the Band. He suffered a nervous breakdown in 1944, but made a comeback directing numbers for Romance on the High Seas in 1948 followed by full direction of Take Me Out to the Ball Game in 1949. He started to direct Annie Get Your Gun with Judy Garland in 1949, but after she was removed from the picture due to health issues and Betty Hutton took over the role, Berkeley was replaced with director George Sidney. Million Dollar Mermaid was one of Busby Berkeley’s last projects.

The movie Million Dollar Mermaid opened at Radio City Music Hall in December of 1952. Star Esther Williams received an award from the Hollywood Foreign Press Association as the number one female movie star in fifty countries. Cinematographer George J. Folsey was nominated for an Oscar for Best Color Cinematography. A sequel to the movie was planned but never filmed.