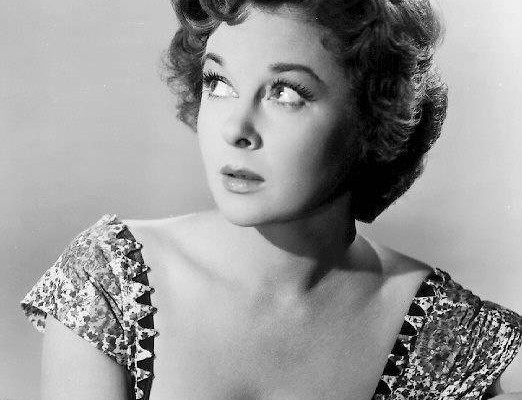 Toronto Film Society presented My Foolish Heart (1949) on Monday, February 21, 1977 in a double bill with Deadline at Dawn (1946) and the write up Susan Hayward – The Brooklyn Bernhardt as part of the Season 29 Monday Evening Film Buff Series, Programme 7.

Susan Hayward was blessed with a great many physical advantages.  Hair as full and russet as a forest at Thanksgiving.  Eyes that could flash with passion or glow with longing.  A figure stacked like the Robarts Library.  A voice whose deep voluptuousness gives a strong suggestion of how the mythical syrens’ song must have captivated Ulysses.  Beyond all this, a conveyed strength of character which combined toughness with tenderness in arresting proportions.  She seems to have been, not so much liberated, simply born free.  As her screenplays often stressed–and as her own life echoed–she could prove a good and loyal mate to a strong man but would be difficult for a weaker one to handle.  A rather limited actress, in strictly technical terms, she tended to rely on one of three or four basic approaches to any given scene–aggressive, sardonic, wistful melting–yes, that’s four.  This is written not destructively but by a scribe who loves the memory of Susan Hayward and has been enchanted by her since he was fifteen.  The point of her, in many ways, triumphant career is not her limitations but in the way she overcame them by the force and sincerity of her screen  personality.  A box-office favourite for more than twenty years, and a frequent recipient of both ecstatic reviews and international awards, the Brooklyn Bernhardt outshone all but a very few other female stars in Hollywood and has left an indelible impression in screen history.

In the published screenplay of All About Eve by Joseph L. Mankiewicz, we can check the wording of lines from the final scene, when an aspiring (stage) actress is speaking to the famous Eve Harrington.

The girl who was to become Susan Hayward was born Edythe Marrener on June 30, 1918.  She grew up in a tough neighbourhood and also suffered quite a lot of sickness as a child: there was definitely no “silver spoon” in her pedigree.  However, her beauty soon became apparent and she became a New York model while still in her teens.  As the result of a magazine cover, she was brought out to Hollywood on a starlet contract by Warner Bros., which produced little but at least got her to the right place.  Dismissed at one point as quite without talent (or perhaps, in some sense, “uncooperative”), she announced: “I like California and oranges, I think I’ll stay!”

Her first good opportunity came as the girl Ray Milland leaves behind (but collects again at the end) in Beaut Geste (1939).  Director William Wellman, impressed by her fiery emotion in even this little role, is said to have exclaimed: “My God, they’ve sprung a red-haired Bette Davis on me.”  But subsequent parts under the new Paramount contract were not often very  rewarding, although an unusual “B” picture Among the Living is an exception.  Also, it did her budding career no harm when De Mille “drowned” her after a few fair scenes in his attention-getting Reap the Wild Wind.  She made herself quite a nuisance to her bosses at a Paramount sales campaign when she informed visiting exhibitors that, if they wanted her in more pictures, they should say so!

However, it was under a new agreement with independent producer Walter Wanger that Susan’s career began to blossom in such films as Smash-Up, Tap Roots and Tulsa.  When not handicapped by alcoholism, her screen persona now tended towards emancipated executive women or ambitious historical ladies with a dash of Scarlett O’Hara in their makeup.  (The actress had in fact tested for Gone With the Wind but her youth, if nothing else, was against her.)  In 1949 Wanger, in financial straits, sold her contract to Twentieth Century-Fox.  This proved to be a blessing disguise.  Groomed more luxuriantly than ever before, bolstered by the high Fox production standards and often seen in Technicolor, “Susan Hayward–Wonderwoman” emerged.  Her Fox films included four by the veteran but still inspired director Henry King, I’d Climb the Highest Mountain, David and Bathsheba, The Snows of Kilimanjaro and Untamed.  Two other excellent roles came in With a Song in my Heart (Walter Lang) and The President’s Lady (Henry Levin).  The other ladies at the studio, those with longer tenure such as Jeanne Crain and Linda Darnell, could have been forgiven for hating her.

After the weakening of studio dominance in the mid-50s, Susan became a free-lance, though fulfilling some remaining commitments to Fox which almost brought her the role of Cleopatra, upon Elizabeth Taylor’s illness.  What a Serpant of Old Nile she would have been!  In this period came what are probably her most immediately identified films by enthusiasts generally.  Strangely, many of her pictures have include “I” in their titles.  In I’ll Cry Tomorrow and I Want to Live, Susan and the emerging maturity of raw, gritty screen stories met head on.  Her performances were not radically different from others she had already given but the violent emotion and nerve-exposed power of the situations and dialogue brought a new respect for the honesty and tremendous personality projection which had been hers all along.

The actress’s ten year marriage to Jess Barker had ended in 1954.  (Twin sons, Gregory and Timothy, were born in 1945).  Personal unhappiness led to a widely-reported suicide attempt in 1955 but two years later she became much more contentedly married to a wealthy businessman, Eaton Chalkley.  His death in 1967 struck her cruelly.

Although she set up her own production company–Carrollton, Inc., named after the town in Georgia where she and her second husband lived–Susan’s films of the 60s were not so notable.  However, she remained a box-office attraction and some of us think fondly of Back Street (third version, 1961), Mankiewicz’s wordy but ingenious The Honey Pot (1967) and, especially, Stolen Hours, made in Britain in 1963.  This remake of Dark Victory suffered unanimously unfavourable comparison with Bette Davis’s film–probably not unfairly–but in itself was nicely done and gave Susan the chance to range stunningly from spoiled society girl to devoted but dying wife.  In view of her own fate, the final scenes now have an almost unbearable poignancy.  Whereas Susan’s untimely death from a brain tumor in 1975 remains tragic, there can be nothing now to mar the memory of her performances–no cheap horror films, no television series, no commercials.  Instead we can remember the spirited, courageous girl who announced to the world that she wanted to live, so she’d cry tomorrow and, with a song in her heart, she’d climb the highest mountain.  All of which she did.