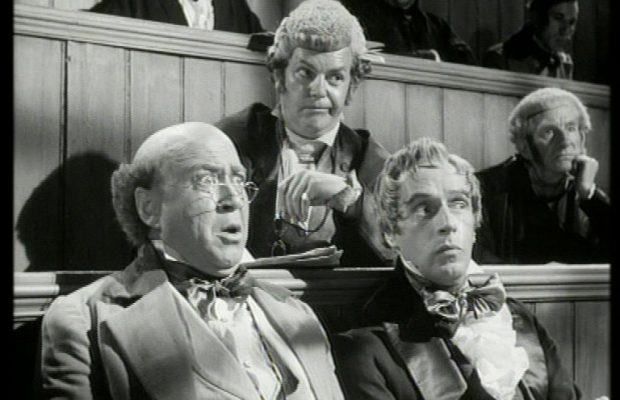 Dickens novels teem with dozens of vivid characters, making film versions wonderful showcases for character actors. Though British actors are often unknown to North American audiences, this film features some familiar faces. The film also features two actresses named Hermione, which may be a record. Since both Hermiones performed in many successful American productions, they are probably the best-known cast members outside Britain.

HERMIONE Ferdinanda GINGOLD was born in England in 1897, the daughter of an Austrian financier and an English homemaker. “I had all the schooling any actress needs. I learned enough to sign contracts,” she later joked. Originally a dramatic actress with a coloratura soprano singing voice, her throaty purr developed and deepened as a result of vocal nodules, which her wise mother insisted she not remove. Gingold made her stage debut in 1908 and played a wide variety of roles before her flair for quirky comedy was discovered in the 1930s. She then appeared in many musical revues, delightfully stealing scenes left and right. In the process, she sharpened her innate bawdy, razor-sharp wit. After World War II, Gingold tested her popularity by going to the United States. She soon became a celebrated hit, appearing in musical revues and Broadway plays such as “Oh Dad, Poor Dad…Mama’s Hung You in the Closet and I’m Feeling So Sad” (1963) and “A Little Night Music” (1973). She also went to Hollywood, performing in comedies and musicals. She usually played her own charming, haughty self in movies, notably as the aging courtesan in Gigi (1958), which won her a Golden Globe award, The Music Man (1962) and the pallid film version of her stage hit A Little Night Music (1977).

“Fighting is essentially a masculine idea; a woman’s weapon is her tongue,” Gingold declared. She was a gifted raconteur, and a very popular TV talk-show guest. In one memorable appearance on Merv Griffin’s talk show in 1971, she followed fellow guests Zsa Zsa Gabor and Charro, who had been sniping at each other for most of the show. Hermione strode out onstage formidably, carrying her pet terrier, and said in stentorian tones, “You don’t mind if I bring out another bitch, do you?” In 1987, just as she was completing her autobiography, “How to Grow Old Disgracefully,” Hermione Gingold died of pneumonia. It was published posthumously the next year. 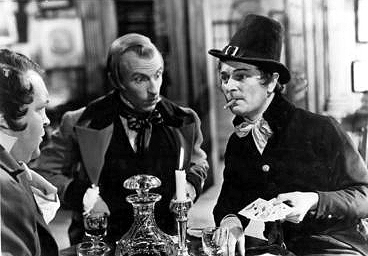 HERMIONE BADDELEY was born Hermione Youlanda Ruby Clinton-Baddeley in 1906, in Shropshire, England. Her older sister was fellow actress Angela Baddeley, later famous as the cook Mrs. Bridges in television’s “Upstairs Downstairs”. Hermione accumulated a wealth of stage experience in addition to making movies. Playwrights loved her work; George Bernard Shaw enjoyed her performance in his play “Heartbreak House” so much that he suggested she should change her surname from Baddeley to “Goodeley”. She had a very successful professional relationship with Noël Coward, appearing in many of his plays in the 1940s and ‘50s. The most successful of these was her teaming with Hermione Gingold in Coward’s comedy “Fallen Angels”. Baddeley first appeared in films in the 1920s. She appeared in many notable films over the years, including Brighton Rock (1947) Passport to Pimlico (1949), A Christmas Carol (1951), The Bells of St. Trinian’s (1954), Mary Poppins (1964) and The Unsinkable Molly Brown (1964). She was nominated for an Academy Award for Best Supporting Actress for her portrayal of Simone Signoret’s best friend in Room at the Top (1959). At only 2 minutes and 20 seconds, hers is the shortest performance ever nominated for an Academy Award. She had a long, involved relationship with its star, Laurence Harvey, later commenting, “Life with him was exciting and funny” and “After you’ve lived with Laurence Harvey, nothing in life is ever really too awful again.” In 1963, she was nominated for Broadway’s Tony Award as Best Dramatic Actress for “The Milk Train Doesn’t Stop Here Anymore”. She became well known to North American audiences with recurring roles in two popular television shows, “Little House on the Prairie” and “Maude” (playing housekeeper Nell Naugatuck). Toward the end of her career, Baddeley became a sought-after voice actress, performing in the animated hits The Aristocats (1970), and The Secret of NIMH (1982). Her autobiography, “The Unsinkable Hermione Baddeley,” was published in 1984. She died in 1986, at 79. 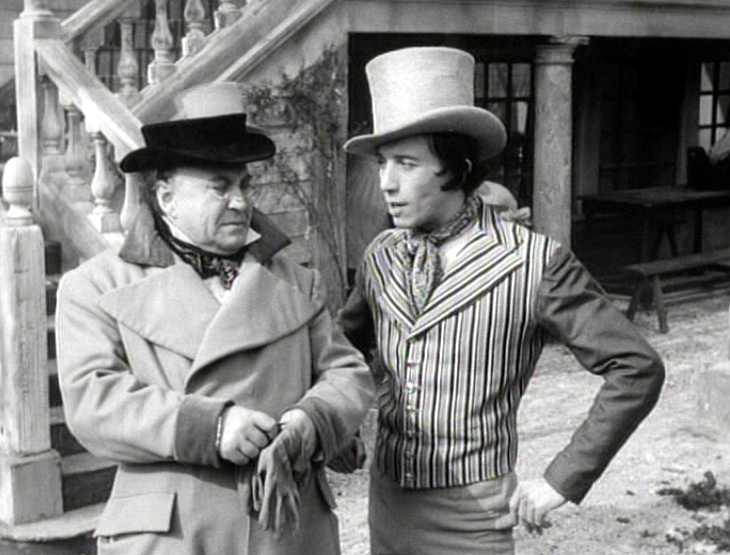 Our Mr. Pickwick, JAMES HAYTER was born in India in 1907, the son of a police superintendent. He was educated in Scotland, where his headmaster encouraged him to try acting. A year’s study at the Royal Academy of Dramatic Arts led to his stage debut in 1925. After several seasons in repertory theatre, Hayter made his film debut in 1936. Following service in the Royal Armoured Corps in World War II, he enjoyed an active film career. He excelled at character roles, especially in comedies. He played Friar Tuck in both The Story of Robin Hood and His Merrie Men (1952) and A Challenge for Robin Hood (1967), and rounded out Dickensian roles in The Pickwick Papers (1952), David Copperfield (1969) and Charles Dickens’ World of Christmas (1974). In 1978, he joined the cast of the long-running British TV comedy “Are You Being Served?”, but appeared for only one season for an unusual reason: Hayter had been doing voice-overs in ads for Mr. Kipling’s Cakes and the firm did not like him appearing as a comically unpleasant character on the TV series. When Hayter declined to quit the show, the firm offered him three times his salary to terminate his contract with Are You Being Served? Hayter growled about it but acquiesced, declaring, “If they will pay me three times as much not to do it, then I won’t do it. At my time of life, I have no more ambition!” He concentrated on doing voice work for the rest of his life. Hayter died in Spain in 1983.

Toothy, witty, oh-so-British JOYCE GRENFELL was actually the daughter of an American socialite, Nora Langhorne (sister of Lady Nancy Astor). Joyce had a privileged upbringing in London, then attended finishing school in Paris. She met Reginald Pascoe Grenfell in 1927 and married him two years later; they were married for 50 years, until her death. Her first job in the entertainment field was as a columnist and radio critic, but the performer in her couldn’t be suppressed for long. She had inherited a bold performance style from her eccentric mother, along with a flair for spot-on impersonations, witty monologues and clever songs. She performed in her first revue in 1939 and was a big hit. Radio appearances and performances for the troops during World War II led to her film career of the 1950s, playing comically gawky matrons. She also made many comic recordings and comedy albums throughout her long career.

Following a very successful command performance for Queen Elizabeth at Windsor Castle in 1973, Grenfell’s health began to fail and she was finally forced to retire. She died at her home in November, 1979. In 1980, a memorial service was held at Westminster Abbey; Grenfell was the first comedian ever honoured there. She had been made an Officer of the British Empire (OBE) in 1946, and she would have been named a Dame Commander (DBE) in the 1980 New Year’s Honours List, had she lived. This would have made her Dame Joyce Grenfell.