Toronto Film Society presented Ride the Pink Horse (1947) on Monday, July 8, 2019 in a double bill with Undertow as part of the Season 72 Summer Series, Programme 1. 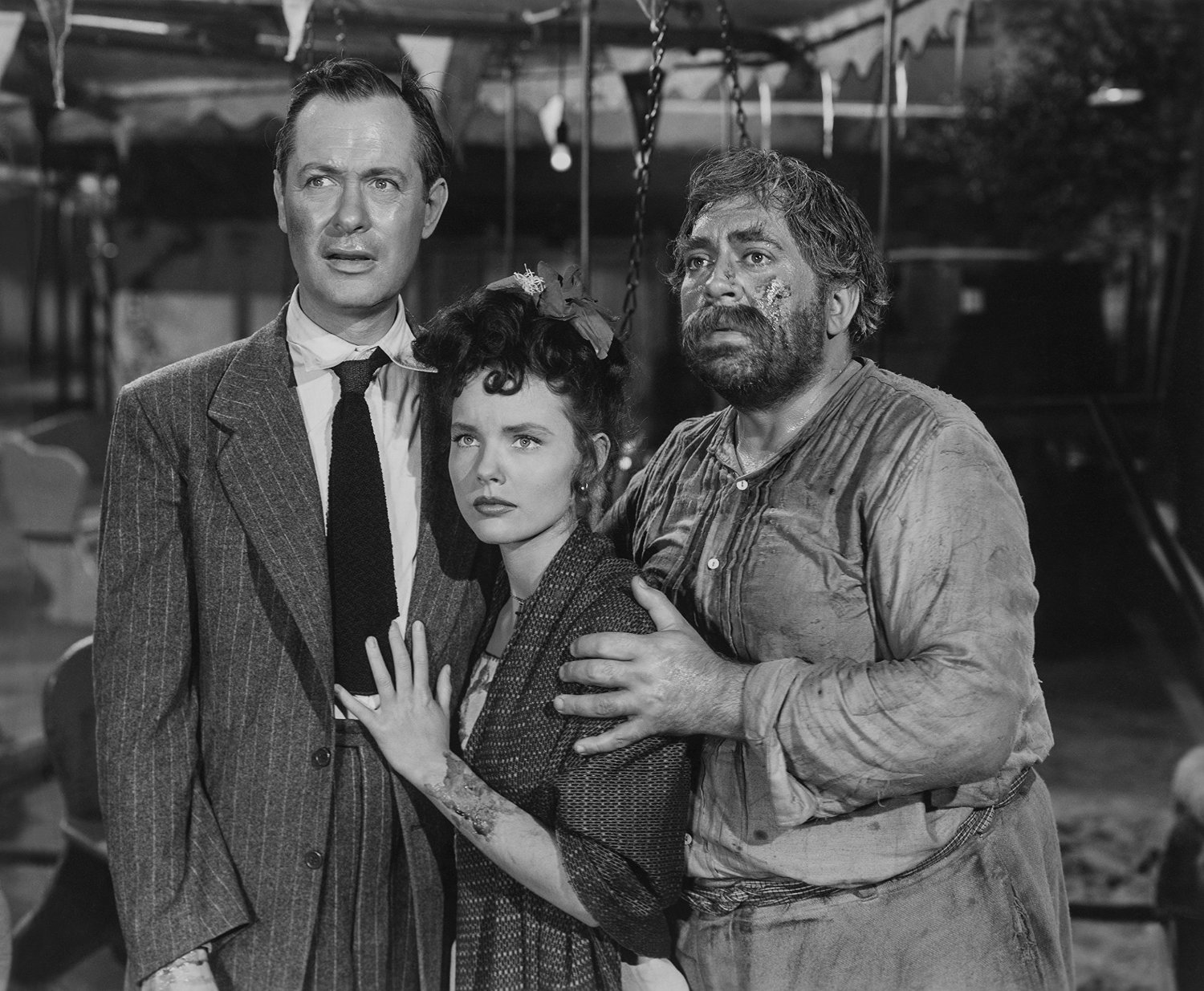 Ride the Pink Horse is really an anti-noir, setting up the hard-boiled elements that, by 1947, were already clichés, only to knock them down like hollow ninepins.  Robert Montgomery’s character is less of a noir type than one of the regular folk who are “born to be broke” as his friend Pancho, played by Thomas Gomez, points out.

As in 1949s The Big Steal and 1950s One-Way Street, the culture of Mexico, not yet spoiled by modernity, improves the character of a crass, jaundiced American.  Author Imogen Sara Smith who wrote about these types of film in her book In Lonely Places: Film Noir Beyond the City feels that the trouble with these films is that they turn noir’s cynicism into a straw man, so obviously excessive that it never feels convincing, and they ignore the possibility that the “primitive” life could have its own flaws and trials, invisible to the tourist’s eye.

But you can decide if this view of the characters fits your own ideas once you’ve watched the picture for yourself. 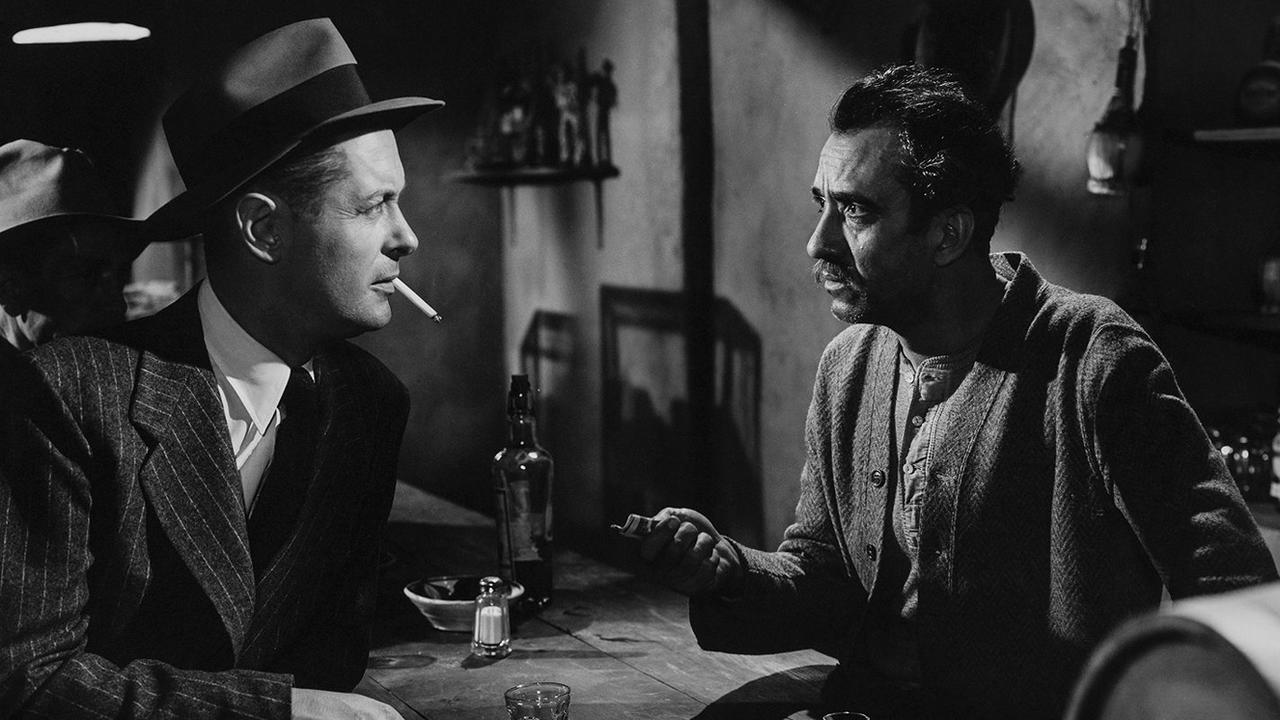 Robert Montgomery, fresh from his directorial début in Lady in the Lake (shown by TFS during Season 43), decided to follow up with another mystery. This time, he chose a novel by the well-known author Dorothy B. Hughes. About five years earlier, another novel by Miss Hughes, The Fallen Sparrow, had been filmed starring John Garfield and Maureen O’Hara in the story of a Spanish Civil War veteran pursued by Nazi agents in New York City. The unusual title of today’s film presumably refers to a horse on the carousel featured in the picture. Of course, the carousel can be taken as a metaphor for life itself: going around in a never-ending circle, getting nowhere, and ultimately falling off the horse; i.e., dying.

The setting is a noisy New Mexican resort town with Mr. Montgomery portraying a clumsy amateur blackmailer. Wanda Hendrix, a Paramount star of the era (e.g., of Miss Tatlock’s Millions), is on hand as a young Mexican girl who befriends Mr. Montgomery and ultimately assists him in his last violent race with fate and death. She gives a performance that is remarkably sensitive, reflecting sad and mystic moods.  Thomas Gomez, a veteran character actor, plays the carousel operator, a cheerful, picturesque fellow. Fred Clark plays a big-time crook in a thoroughly convincing manner, while Art Smith is shrewd and tough as an FBI agent. As director, Mr. Montgomery keeps the story shockingly literal and moving at an unrelenting pace. It is filled with grisly action and rugged, honest sentiment. As the star, he does not try to hog the spotlight, but instead gives the other performers a chance.

To prepare the screenplay, Universal hired Ben Hecht and Charles Lederer. Mr. Hecht, of course, is remembered as one of the best screenwriters in Hollywood history, often in collaboration with Charles MacArthur. Together, they wrote the 1931 hit The Front Page, drawing on Hecht’s experience as a newspaper reporter. Alone, Hecht wrote numerous scripts, often serving as “fixer” on problem screenplays, such as Gone With the Wind. He was much in demand as a fast and efficient writer. Robert Montgomery had a rather checkered career as an actor, extending roughly from the early-sound era to the early-1950s. For several years at MGM in the 1930s, he was just another leading man until 1937, when he persuaded the studio to star him in the gruesome murder tale Night Must Fall with Rosalind Russell. Much to the studio’s surprise, the film was a “sleeper”—a surprise hit—and Mr. Montgomery had proven that he was a versatile, front-rank actor. Producer Joan Harrison had started out as Alfred Hitchcock’s assistant. She débuted as a producer in the 1944 mystery The Phantom Lady, starring Ella Raines and Franchot Tone. Ride the Pink Horse, with its unusual setting, represents an interesting entry in the fascinating saga of film noir, the genre that flourished in the 1940s and 1950s.