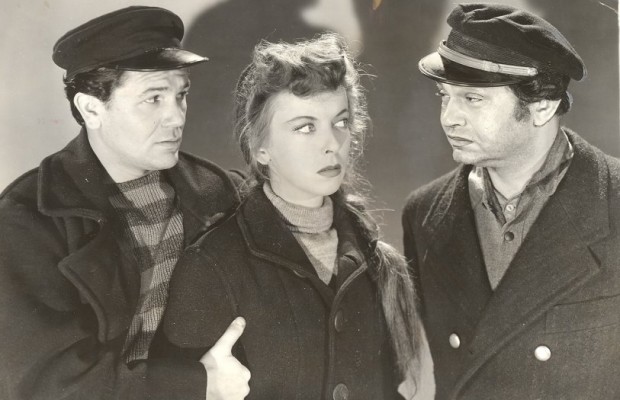 Toronto Film Society presented The Sea Wolf (1941) on Monday, March 8, 1976 in a double bill with Where the Sidewalk Ends as part of the Season 28 Monday Evening Film Buff Series, Programme 5.

“Jack London’s famous nautical tyrant, Captain “Wolf” Larsen has been portrayed in various shades of purple any times upon the screen, but we don’t recall that he has ever been presented with such scrupulous psychological respect as he is in the Warners’ current version of The Sea Wolf.  Generally Captain Larsen has been a double-dyed brute and that’s all–the melodramatic master of a hell-ship out of sheer perversity.  But this time his monstrous sadism is more studiously explored, and the mind of the “Wolf” is exposed as just a bundle of psychoses.  With Edward G. Robinson playing him, the exposure is vivid, indeed.

And in one respect, at least this is a highly admirable approach, for it indicates an intent to delineate character intelligently.  Likewise it follows the line which Mr. London laid down.  Larsen, in the book, was a complex maniac whose weaknesses were probed by a man he picked up out of the sea–a an who conquered the brute in a running battle of wits.  And that is the line of the film.  But, by the method of attack, the drive of the drama is impaired, for precious time is wasted with too much dialogic psychiatry.  When bloody business on deck might be occupying the screen, “Wolf” and his mental antagonist sit down to discuss the case.

‘You are a brute and a sadist because…’, says the amateur psychologist, launching into a careful dissection of the captain’s ego.  And the captain, glowering darkly, listens with slight protest.  In a story devoted to action, this sort of thing bogs it down, especially since the analysis is never completely clear.

When The Sea Wolf is topside, however, it rolls along ruthlessly and draws a forbidding picture of oppressive life at sea, of a captain who rules his men without heart.  Some of it is too heavily drenched with theatrical villainy and Mr. Robinson occasionally overacts his part.  But, on the whole, the slapping and cuffing are done with impressive virility and in a manner distinctive to Warner films.  John Garfield plays the part of a recalcitrant crewman with concentrated spite, Ida Lupino makes a knot of scorn out of the wretched trollop who happens to be aboard, Barry Fitzgerald gives another of his viperish performances as a deceitful ship’s cook (and when are they going to let Mr. Fitzgerald play something else?) and Alexander Knox handles the role of the persistent analyst with forceful tenacity.   Gene Lockhart as the drunken ship’s doctor rather exaggerated his one big scene. …”