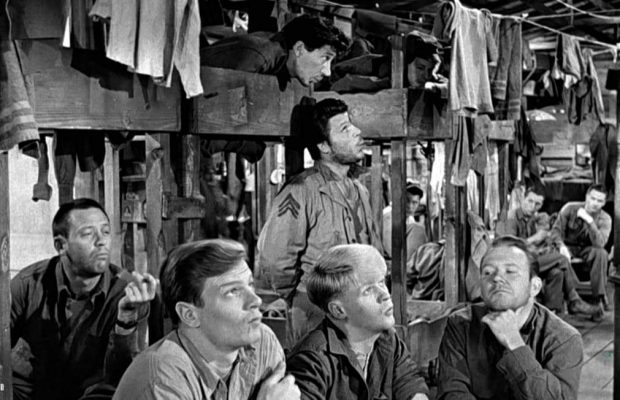 One of the most successful and important US war films was Billy Wilder’s cynical, and hilarious Stalag 17.  It is the story of a cocky, self-serving individualist who juggles any and all situations to further his own comfort and well being, and is intent on just one goal, survival.  The introductory sequence sums up the story; a group of men begin a breakout attempt as William Holden, (Sefton), bets packages of cigarettes that they will not make it; machine guns fire, and Sefton sweeps the cigarettes into a foot-locker of nylons, coffee, and other good while the men stare on.

Stalag 17 is derived from the 1951 Broadway play of the same name.  Billy Wilder collaborated on the screenplay by Donald Bevan and Edmund Trzcinski.  Many criticized the screenplay, because of the interactions of the P.O.W.’s (for example, men dancing together), the film’s humour, (men trying to sneak into the Russian women’s camp), or the lack of the ugly realities, the wicked ironies of being a prisoner of war.  But Wilder was working under a strong Production Code in the early 50’s.  Some of the play’s humour and masculine ribalding has been deleted from the film version, but enough of it remains to promote the gusty rowdy show.  Stalag 17 is not the story of a P.O.W. camp, but of individualism and survival.  The story has many similarities to the role that George Segal portrays in Bryan Forbes’s King Rat, twelve years later. 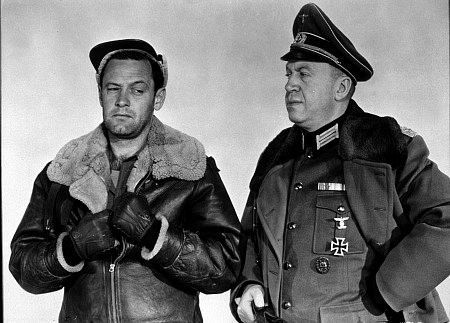 Otto Preminger, (on leave from directing), is glittering as the camp commander, and Sig Ruman delivers a burlesque style as a barracks guard, and the others who convey the tension of men at bay.  But it is Holden’s many faceted, tensely authoritative performance that carries the picture; it is the centre-piece on which all else hangs.  This was Holden’s and Wilder’s first film together since Sunset Boulevard.  Billy Wilder became William Holden’s lucky director, because he received an Oscar nomination for Sunset Boulevard, and won the Oscar itself for his portrayal of Sefton.  Originally Charlton Heston was supposed to have played Sefton, but last minute changes happened and William Holden received it.

Even Billy Wilder has a preference for Stalag 17.  Normally he only find one or two moments that he can appreciate.  But Stalag 17, as well as Sunset Boulevard, are his favourite, because he can see more outstanding moments in these two films than any others he has done.

Stalag 17 will be immediately followed by the last 30 minutes of Anatomy of a Murder.  TFS was able to dig up the missing footage from our last show, and felt this was the best way to screen the remainder of the film.