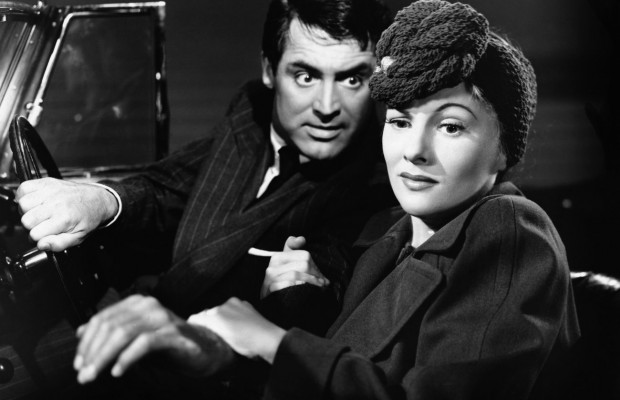 Alfred Hitchcock’s trademarked cinematic development of suspenseful drama, through mental emotions of the story principals, is vividly displayed in ‘Suspicion,’ a class production provided with excellence in direction, acting and mounting.  Picture is due for critical attention and strong women patronage in the key runs, to follow through for profitable biz in the

subsequent bookings with the adult trade.

Joan Fontaine equals her highly-rating performance in ‘Rebecca’ as the pivotal factor in the tale, successfully transposing to the screen her innermost emotions and fears over the wastrel and apparently-murderous antics of her husband.  Cary Grant, although gaining no sympathy in his role of the latter, turns in a sparkling characterization as the bounder who continually discounts financial responsibilities and finally gets jammed over thefts from his employer.  Nigel Bruce is outstanding in support, with Sir Cedric Hardwicke, Dame May Whitty, and Heather Angel capably handling respective cast assignments.

In switching tragic ending of Francis Iles’ novel in favor of a happy finale, Hitchcock and his scripters devised a most inept and inconclusive windup that fails to measure up to the dramatic intensity of preceding footage, and this doesn’t reach the climax expected.  In this respect, picture structure is deficient, and it is obvious that the writers endeavored to toss in the happy ending in a few hundred feet and let it go at that.

Unfolded in the leisurely pace that is characteristic of British cinematic story-telling technique, Hitchcock deftly displays the effect of occurrences on the inner emotions of the wife.  Protected girl of an English country manor, Miss Fontaine falls in love and elopes with Grant, an impecunious and happy-go-lucky individual, who figured her family would amply provide for both of them.  Deeply in love, she overlooks his monetary irresponsibilities until discovery that he has stolen a large sum from an estate, and prosecution and exposure looms.  Burden of events finally develops mental attitude that her husband would even commit murder to secure funds for repayment, and this suspicion is heightened when Grant’s friend, Bruce, dies during visit to Paris—with the wife believing the husband responsible.  Finally at the breaking point of nervous tension, she

believes Grant would even stoop to poisoning her to secure insurance to repay his thefts.  Finish, with satisfactory explanations and happy reconciliation, replaces the tragic ending of the book.

Under Hitchcock’s guidance, picture develops plenty of suspense and appeal to the women sector in displaying a wife’s development of mental hysteria through burden of real or imagined criminal tendencies.  Production is excellently mounted throughout, with English settings and Harry Stradling’s photography of top grade.

SUSPICION, screen play by Samson Raphaelson, Joan Harrison and Alma Reville; from the novel, “Before the Fact,” by Francis Iles; directed by Alfred Hitchcock for RKO-Radio Pictures.  At the RadioCityMusic Hall.

If Alfred Hitchcock were not the fine film director that he is, the chances are better than even that he would be a distinguished light at the (legal) bar. For very few lawyers are gifted with the special ability which is his to put a case together in the most innocent but subtle way, to plant prima facie evidence without rousing the slightest alarm and then suddenly to muster his assumptions and drive home a staggering attack. Mr. Hitchcock is probably the most artful sophist working for the films—and anyone who doesn’t think so should see “Suspicion” at the Music Hall.

True, we should incidentally warn you that this is not Mr. Hitchcock at his best, for the clerical staff which helped him prepare his brief for this case did not provide too much in the way of material. Those highly intriguing complications which have featured some of his previous master works are lacking in this instance. Rather Mr. Hitchcock is compelled to construct his attack around a straight psychological progression; a shy, deeply sensitive English girl marries a charming rakehell in maiden innocence, and then, through accumulated evidence, begins to suspect him of dark and foul deeds, suspects of murdering two dear people and finally of having designs upon herself.

Clearly, Mr. Hitchcock’s problem is to give this simple story great consequence—to build, out of slight suggestions and vague, uncertain thoughts, a mounting tower of suspicion which looms forbiddingly. And this he does magnificently with his customary casualness. An early remark dropped by the girl’s father to the effect that her intended is a cheat, a scene in which

the husband acts strangely indifferent to a friend when the latter is seized with a heart attack, a little squabble over a slight untruth—all are directed by Mr. Hitchcock so that they seem inconsequential at the time but still with a sinister undertone which grows as the tension mounts.

Much of his purpose is accomplished through the performance of Joan Fontaine, it must be said, and she, as well as Mr. Hitchcock, deserves unstinted praise. This young lady has unquestionably become one of the finest actresses on the screen, and one of the most beautiful, too; and her development in this picture of a fear-tortured character is fluid and compelling all the way. Gary Grant as the husband is provokingly irresponsible, boyishly gay and also oddly mysterious, as the role properly demands; and Nigel Bruce, Sir Cedric Hardwicke and Leo G. Carroll are fine in minor roles.

One must remark that the ending is not up to Mr. Hitchcock’s usual style, and the general atmosphere of the picture is far less genuine than he previously has wrought. But still he has managed to bring through a tense and exciting tale, a psychological thriller which is packed with lively suspense and a picture that entertains you from beginning to—well, almost the end.