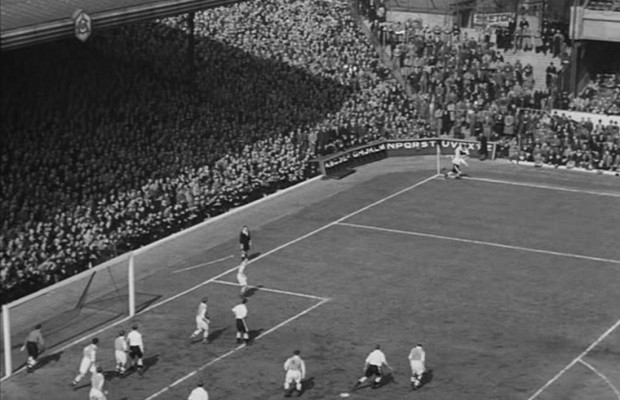 Toronto Film Society presented The Arsenal Stadium Mystery (1939) on Monday, January 18, 2016 in a double bill with Green for Danger as part of the Season 68 Monday Evening Film Buff Series, Programme 4.

Of this evening’s program The Arsenal Stadium Mystery is the more distinctively British but in 1940 it could hardly have been part of an invasion.  It was a product from a studio that few had ever heard of and neither cast nor crew were likely to be recognized by many film goers on this side of the Atlantic.  Its one claim to a star was a character actor who had a certain positive reputation as a stage performer in Britain, but that probably meant that even in its country of origin The Arsenal Stadium Mystery was made by, and headlined, people who few recognized (with the possible exception of some actual footballers cast as themselves).

Thorold Dickinson left Oxford University to work on silent films with George Pearson in Britain and Europe.  He directed a total of nine films between 1936 and 1955 all but the last of which had a country of origin of UK. (Thorold Dickinson’s fourth film The Prime Minister (1941), is listed with a country of origin of UK/USA.)  He received co-author credits for four of the nine films that he directed beginning with his second film The Arsenal Stadium Mystery.  Before directing his first film, The High Command (1937) for Fanfare, he had worked at Ealing as editor on Sing as We Go (1934) which was being produced there by Associated Talking Pictures.  He made some Spanish Civil War films with Sidney Cole, then returned to Britain where he directed his second feature, The Arsenal Stadium Mystery.  Later that same year he directed Gaslight (1940) for British National Films.  The next year he directed The Prime Minister (1941) for Warner Bros.-First National Production.  In 1942 he directed the first of two films for Ealing where he had started his film career almost a decade earlier.  Another decade was to past after Next of Kin (1942) before his second and last film for Ealing, The Secret People (1952) for which he co-authored both the story and the screenplay.  Between those two films he made only two other movies.  Men of Two Worlds (1946) for Two Cities Films and The Queen of Spades (1949) for Associated British Picture Corp.  After his last film at Ealing Thorold Dickinson went to work in Israel where he produced, directed and edited Giv’a 24 Eina Ona (1955) aka Hill 24 Doesn’t Answer which was the first film to be produced in Israel.  This essentially ended his career in feture films.  He went on to take up a United Nations film post, before returning to Britain to set up pioneering courses in film at University College, London.  In 1967 he was appointed Professor of Film  He died in 1984 at the age of 80.

Apart from its merit as a mystery the real reason to be interested in The Arsenal Stadium Mystery is found in its sleuth, Insp. Anthony Slade.  As played by Leslie Banks, Inspector Slade is very eccentric.  He worries over the hat he wears, flaps around making many weird statements and is as concerned about his appearance as he is about the murder that he is supposed to be solving.  While the script provides much of this material it is Leslie Banks tongue in cheek delivery that is perfectly pitched.

Leslie Banks was about 30 years old when he made his first movie, a silent named Experience (1921) directed by George Fitzmaurice, which starred Richard Barthelmess and Reginald Denny.  His bit part had no name.  The names which other performers had were named things such as Love, Ambition and Hope.  He was basically a stage actor and after his minuscule part in Experience more than a decade was to pass before his next film appearance.  In what might almost be considered his first movie, he played Count Zaroff in the Hollywood movie The Most Dangerous Game (1932) which ostensibly starred Joel McCrea and Fay Wray.  During the next two years he made five movies, two in the US and three in the UK.  The last of these movies was Alfred Hitchcock’s The Man Who Knew Too Much (1934).  Leslie Banks originated the role that James Stewart would inherit 22 years later when Alfred Hitchcock radically reowrked the basic story but again titled it The Man Who Knew Too Much (1956).

Over the next six years, Leslie Banks made a dozen features which like his previous films cast him in roles which in no way anticipated his performance in The Arsenal Stadium Mystery but it is easy to detect similarities between his performance as Insp. Anthony Slade and his performance later the next year as Insp. Andrew Kirk in Busman’s Holiday (1940) which TFS screened earlier this year (May 2005) during its annual spring seminar at Kempenfelt.  In the eleven features which Leslie Banks made after Busman’s Holiday (1940) he never again assayed such a role again.

Ian McLean plays Sgt. Clinton as the straight man to Leslie Banks’ Insp. Anthony Slade.  He had made only two films before The Arsenal Stadium Mystery and both of them were comedies as were his next two films.  However, starting with his role as Dundas in The Young Mr. Pitt (1942) most of the remaining films in which he appeared were more serious.  Only with his next to the last movie, as Inspector Crane in Calling Paul Temple (1948), did he ever again play a police officer.

The Arsenal Stadium Mystery appears even today to be better known in Britain than it ever was on this side of the Atlantic.  This is partially attributable to its reliance on football action which has been described as “a mix of silly stuff and authentic style play.”  For those old enough to have any memory of pre-war Arsenal footballers, it is worth noting that in the cast listing three parts are listed as “Himself” and it seems reasonable to assume that they were recognizable footballers at the time the film was made.